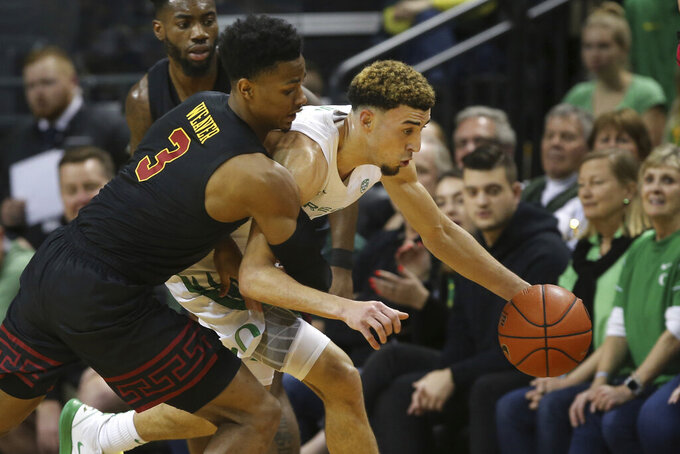 Oregon's Chris Duarte, right, steals the ball from Southern California's Daniel Utomi, back, and Elijah Weaver during the first half of an NCAA basketball game in Eugene, Ore., Thursday, Jan. 23, 2020. (AP Photo/Chris Pietsch) 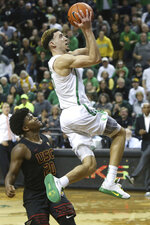 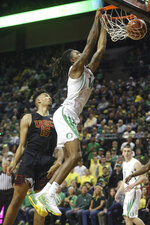 The junior guard had 30 points, 11 rebounds and eight steals, and the No. 12 Ducks outlasted Southern California 79-70 in double overtime Thursday night.

“I was watching the point guard's eyes. I was watching everybody's eyes. So I knew where they were going to pass the ball," Duarte said. "So I took that as an advantage.”

Oregon teammate Payton Pritchard added 24 points and seven assists, becoming the first Pac-12 player to reach 1,500 career points, 600 assists and 500 rebounds. When the achievement was noted on the video scoreboard at Matthew Knight Arena in the second half, the crowd gave the senior guard a standing ovation.

C.J. Walker and Pritchard hit consecutive layups to tie it at 62 and send the game to overtime.

Pritchard's 3-pointer in the first extra period gave the Ducks a 65-64 lead, but Ethan Anderson's layup and free throw put the Trojans up by two. Duarte made free throws for the Ducks to tie it again, and Mathews and Pritchard both missed shots down the stretch.

Duarte and Pritchard each hit a pair of free throws that gave Oregon a four-point advantage to open the second overtime. Duarte's 3-pointer put the Ducks up 74-68, and USC couldn't catch up.

Duarte's eight steals were one shy of the school record.

“He was the difference in the game,” Oregon coach Dana Altman said. “No doubt about it.”

“You’ve got to take care of the ball. Some ill-timed passes that went to the other guys. We just have to make the right basketball play,” USC coach Andy Enfield said. “Give them credit, they’re a good defensive team.”

It was Oregon's third overtime game in league play.

Oregon was coming off a 64-61 overtime win at Washington last weekend. The Ducks overcame a 16-point deficit and won it on Pritchard's 3-pointer with 3.4 seconds left. But Oregon lost to Washington State 72-61 last Thursday, resulting in a fall from No. 8 to No. 12 in the AP Top 25.

USC had won nine of its last 10 games and three straight, including last Saturday's 82-78 overtime victory against Stanford. The Trojans came back from a 21-point deficit in the second half to beat the Cardinal.

The Ducks built an early 15-7 lead after Duarte's fast-break layup and 3-pointer. Oregon stayed in front, but USC closed to 24-23 on Daniel Utomi's jumper.

The teams went to the break with Oregon ahead 32-30. Utomi led all scorers with 10 points.

Okongwu's layup for USC tied it at 32 to start the second half but the Ducks responded with a 10-0 run, capped by Duarte's jumper off a dish from Pritchard. Okongwu's dunk ended the Trojans' scoring drought.

Okongwu made consecutive baskets to pull USC to 56-53, and Matthews tied it with a 3-pointer to top off an 11-0 Trojans run. Pritchard answered with a layup for Oregon.

Freshman forward Chandler Lawson's layup stretched the Ducks' lead to 49-38 midway through the second half.

Lawson made his first start for the Ducks after he had 16 points and 12 rebounds against Washington. Oregon was without center N'Faly Dante, who was questionable for the game after hurting his knee against the Huskies.

USC: The Trojans started 4-1 in conference play for the first time since 2016. USC went 5-0 to open conference play in 2002. ... Enfield said afterward that this loss stung. “We've played a few close games this year. We won three or four close ones,” he said. “We were right there and we lost. It hurts when you lose a game and have a chance.”

Oregon: Pritchard is closing in on Oregon's career record of 614 assists held by Kenya Wilkins. ... Pritchard has won 96 games as a Ducks player, one shy of Oregon's career leader, Johnathan Lloyd. ... Sabrina Ionescu, star guard for the No. 4 Oregon women, was at the game and was interviewed by the Pac-12 broadcast team during the first half.