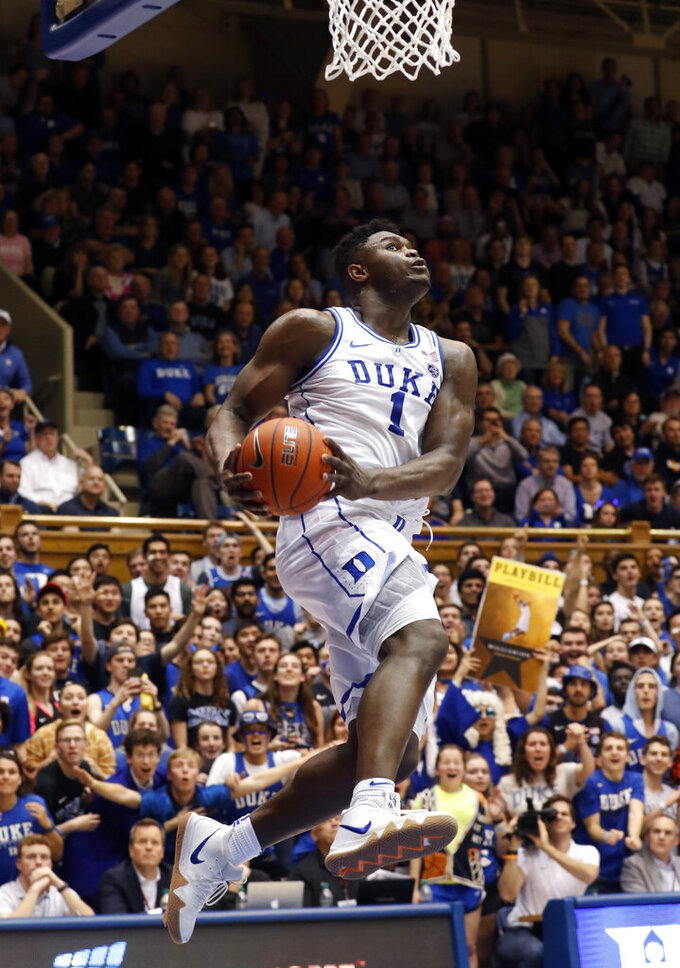 Duke's Zion Williamson (1) drives to the hoop against Boston College during the second half of an NCAA college basketball game in Durham, N.C., Tuesday, Feb. 5, 2019. (AP Photo/Chris Seward) 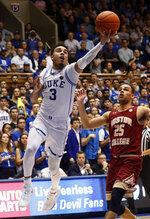 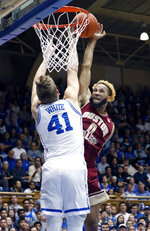 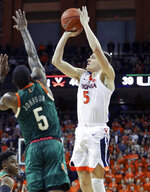 No. 2 Duke at No. 3 Virginia. The first matchup of these ACC co-leaders was a classic. The second could be even better — because this time, the Blue Devils will have point guard Tre Jones, who missed his team's victory last month with a shoulder injury. Both teams have been perfect since that one, with Duke (20-2, 8-1) winning six in a row since then and the Cavaliers (20-1, 8-1) on a four-game winning streak. The winner will claim no worse than a share of first place.

Neither Duke nor Virginia can afford a letdown because looming ahead are road tests against Top 25 opponents who have designs on the top of the conference standings. Virginia visits No. 8 North Carolina (18-4, 8-1) — the third team in the three-way tie atop the standings — on Monday night. The following night, the Blue Devils head to No. 16 Louisville (17-6, 8-2) — which has won seven of eight.

Tyus Battle of Syracuse and Ky Bowman of Boston College are staging quite the battle for first place on the ACC's career scoring list among active players. Battle passed Bowman on Tuesday night when he scored 23 points in a loss to Florida State while Bowman managed just 11 in a loss to Duke. Battle has 1,505 points to 1,498 for Bowman. They go head to head on Saturday.

A big reason for Louisville's surprising success has been its knack for knocking down 3-pointers. The Cardinals, who make 36 percent of their 3s to rank fourth in the league, have gotten hot lately. They've made at least 10 of them in three straight games, and they've done it nine times. Only Virginia Tech (13) has done it more frequently.

It's going to be tough for No. 9 North Carolina State to stick around the top of the ACC standings. The Wolfpack's visit to No. 24 Florida State on Thursday marked their first game against a Top 25 opponent — and begins a stretch run that includes five of seven games against nationally ranked teams. One of those other games is a road rematch with the North Carolina team that gave them their first loss of the season last weekend. N.C. State also has yet to play either of its two ACC co-leaders — No. 2 Louisville and No. 4 Notre Dame.