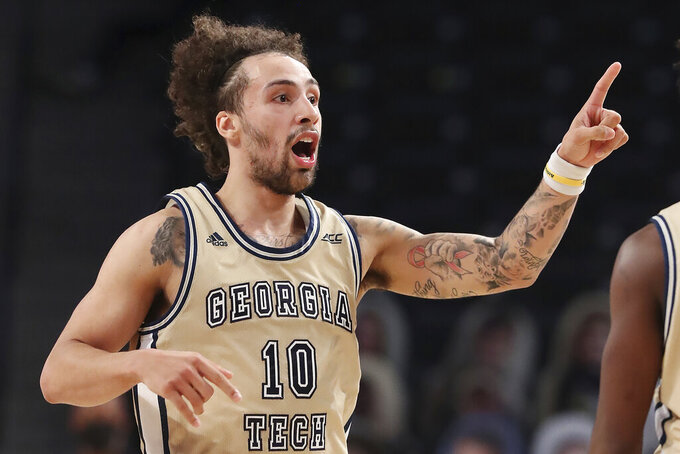 It's a heavy burden to place on Alvarado, the senior with the big Brooklyn swagger and small frame, as the Yellow Jackets prepare for Saturday's important game against Notre Dame.

Alvarado boosted Georgia Tech's NCAA hopes by scoring 20 or more points six times in seven games, including 21 points in a 76-65 win over No. 16 Florida State on Saturday.

Alvarado's value also was painfully clear in Monday's 74-58 loss at Louisville. With the point guard held to only seven points, matching his season low, Georgia Tech suffered its worst scoring output of the season.

“Alvarado is the engine of their team," said Louisville coach Chris Mack, adding that without the point guard's usual production, the Yellow Jackets “stalled.”

Alvarado made only 3 of 11 shots from the field in the loss, including 1 of 6 from behind the arc.

“It was probably his worst game in a long time, and when that happens we struggle,” said Georgia Tech coach Josh Pastner.

Georgia Tech usually can count on all-around production from Alvarado.

Among ACC leaders, Alvarado is third in scoring with 17.5 points per game, first with 2.93 steals, and fourth with 4.36 assists. He also ranks among the top 10 in field goal percentage, free throw percentage, minutes, and assist-to-turnover ratio.

Despite his high-energy style of play, Alvarado rarely leaves the court.

“I just want to bring my brothers up with me,” said Alvarado, who averages nearly 37 minutes. “I’m going to bring my energy, if I have to dive on the floor or take a charge, do anything to just get them to say, ‘Oh, Jose is going so I’ve got to go with him.’”

Added Alvarado: “I go out there like my hair is on fire and I’m going to give it all I’ve got.”

Center Moses Wright, who had 15 points, 16 rebounds and a career-high seven blocked shots against Louisville, is enjoying his best season. Even so, Georgia Tech's strength is its backcourt combination of Alvarado and Michael Devoe. The two have combined for almost half of the Yellow Jackets' scoring in ACC games.

Pastner has believed in Alvarado since signing the 6-foot, 179-pound guard from Brooklyn, New York, when others said the three-star prospect didn't meet ACC standards.

Pastner said he was won over by Alvarado's big heart.

“Winning was more important for him than breathing,” Pastner said.

“In our vision of what we wanted to do, you had to have somebody at that guard spot who is not going to be afraid of who we’re going to play in this league, the McDonald’s All-Americans. ... There was going to be no fear.”

Alvarado has played like a blue-chip recruit, placing his name among the leaders in almost every important ACC statistic. He had six assists and five steals while logging 40 minutes against Florida State. Only two days later, he added two steals against Louisville.

“In my head, I feel I’m the best defender in the country,” he said Saturday.

Alvarado's poor shooting against Louisville was an outlier. He has eight games with at least 20 points this season, including two with 29. For the season, he has made 52.1% of his shots from the field.

He has played the full 40 minutes in 16 career games and played 58 minutes, 22 seconds of a possible 60 minutes in a four-overtime loss to Georgia State to open the season.