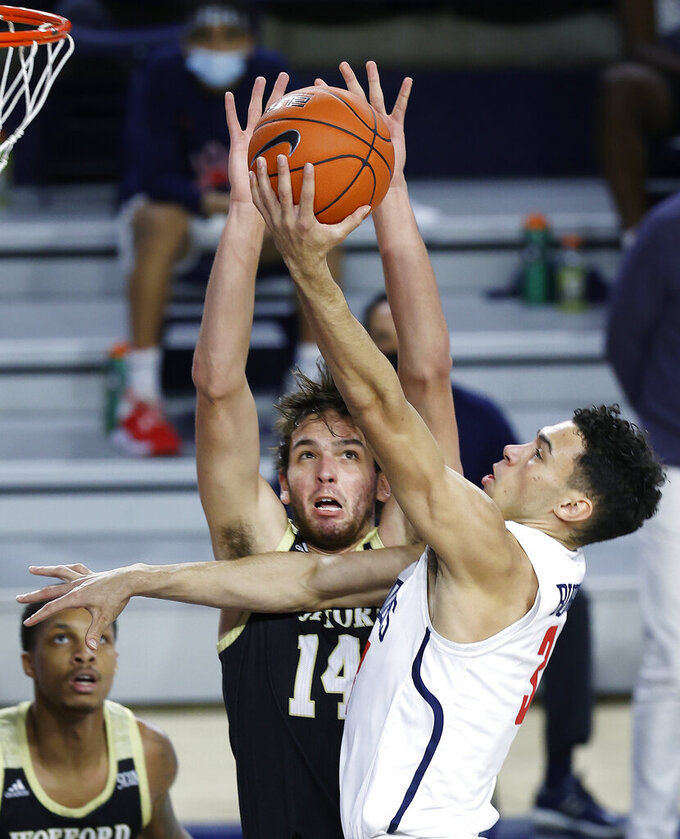 RICHMOND, Va. (AP) — Jacob Gilyard and No. 19 Richmond stepped into uncharted territory and learned a lesson.

The Spiders, playing for the first time this season as a ranked team, scored the game's first 11 points Monday but needed Gilyard's 3-pointer with 19.5 seconds left to beat Wofford 77-72.

“I think we let our foot off the gas,” Gilyard said. “Early on, we could have pushed the lead a little better. ... We've never been somebody that guys are aiming to play, looking forward to playing. We're going to have a target on our backs. We have to be better."

Gilyard led the Spiders (3-0) with 18 points and Grant Golden had 15. Richmond led almost throughout in a game that was arranged only two days earlier, but the Terriers (2-1) shot 55% after halftime and took their first lead with 4:32 remaining.

Storm Murphy led Wofford with 21 points and Messiah Jones had 20 points and 10 rebounds. Wofford missed its first 13 field-goal attempts and trailed 16-3 after eight minutes, but the Terriers trailed just 37-30 at halftime.

Richmond hadn't played since it beat then-No. 10 Kentucky on Nov. 29. The Spiders had to cancel two games last week after a positive COVID-19 test within the program, and they announced the matchup with the Terriers on Saturday. Wofford also had two games canceled in the first week of December and was playing its first game since Nov. 28.

“Really pleased that we were able to play a game, and I appreciate Wofford being able to also play the game on such short notice,” Richmond coach Chris Mooney said.

The Spiders appeared to take command with an 11-3 second-half run that gave them a 56-44 lead, but Wofford responded with a 12-3 burst to get to within 59-56. The Terriers grabbed their first lead at 64-63 on Tray Hollowell's 3-pointer with 4:32 remaining. It was one of 12 3s for the Terriers, something the Spiders will address.

“That will probably be something we need to look at and figure out what those issues were so we can be better defending the 3-point line,” Mooney said.

The lead changed hands five times the rest of the way until Tyler Burton scored in the lane to put Richmond ahead 73-72 with 1:09 left. After Jones missed for the Terriers, Gilyard hit his fourth 3-pointer of the game to give Richmond more of a cushion.

Mooney said the Spiders had to cancel games against Charleston and Furman last week after having three people within the program test positive for COVID-19. None was a player, and all three subsequently tested negative three days in a row.

“That part's really frustrating and just hard to dismiss because we feel like we are doing so many things right and trying to give ourselves the best chance to play," he said.

Gilyard said the most difficult part of the past week was the uncertainty of when the team would be allowed back in its arena and given access to other facilities.

Wofford: The Terriers arrived averaging 99 points after beating Toccoa Falls 88-49 and Carver College 111-37, but they missed their first 13 shots against the Spiders. When Jones finally broke the drought with 12:54 left in the half, it sparked a 15-8 run.

The Terriers play at South Carolina on Thursday.

The Spiders remain at home to face Northern Iowa on Wednesday night.