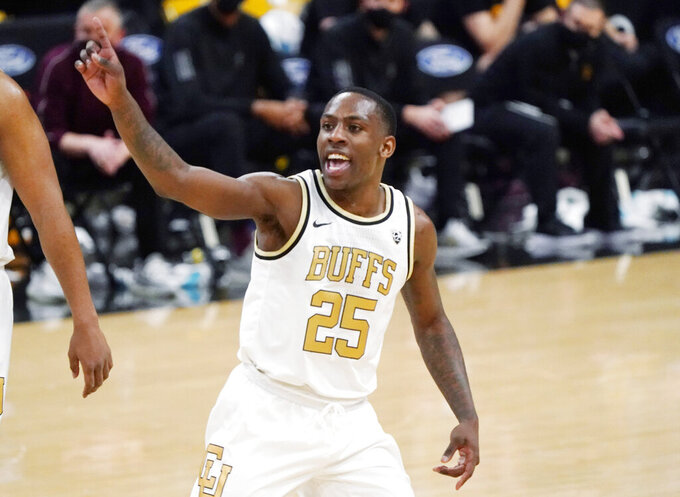 FILE - In this March 4, 2021, file photo, Colorado guard McKinley Wright IV gestures as time runs out in the second half of an NCAA college basketball game against Arizona State in Boulder, Colo. (AP Photo/David Zalubowski, File)

BOULDER, Colo. (AP) — The answer for most of the Colorado Buffaloes’ needs for the past four seasons has consistently been the same — McKinley Wright IV.

Need a big bucket or defensive stop? Count on Wright.

But now the talented point guard is with the Minnesota Timberwolves after a career that saw him become the first men’s basketball player in Pac-12 history with 1,800 points, 600 rebounds and 600 assists.

Those same questions need new respondents. That’s why coach Tad Boyle is putting his team through every conceivable kind of scenario in practice, just to see who will emerge.

“I don’t want anybody out here to try to be McKinley Wright,” Boyle said. “I just want them to be who they are. Be the best version of themselves.”

Barthelemy feels well prepared to step in after being mentored by Wright. He and some of his teammates even recently chatted with Wright on Zoom, with Wright's biggest reminder being to take care of the little things.

That lesson was taken to heart by Barthelemy, who redshirted in 2019-20 and played in 30 games last season. Barthelemy finished second on the team in assists behind Wright, who left as the school’s all-time assists leader.

“He helped me tremendously just building a competitive edge,” Barthelemy said of Wright's influence. “He brought it every day, so it was good for me.”

The Buffaloes are coming off a 23-9 season that saw them rout Georgetown in their NCAA Tournament opener before falling to Florida State. Returning are starters Evan Battey and Elijah Parquet. But they also had a pair of players transfer — D’Shawn Schwartz went to George Mason and big man Dallas Walton to Wake Forest.

Boyle has been putting his team through drills to get them comfortable stepping up in big situations with Wright no longer an option.

“In the past, we’ve all known ultimately it’s in McKinley’s hands,” Boyle said. “But it can be multiple guys. It doesn’t have to just be one guy.”

The Buffs were picked to finish sixth in the preseason Pac-12 media poll. UCLA was tabbed as the team to beat after a trip to the Final Four.

“We’ve always been a team, at least since I’ve been here, that's been a little bit underrated more than overrated,” Boyle said.

Battey only thinks about his health scare when it’s brought up. The 6-foot-8 forward from Los Angeles was playing hoops with buddies in December 2017 when he suffered a stroke.

“It’s not even in the mind,” Battey said. “It’s really just being the best player I can be, in the best shape I can be in.”

Battey will be a key component for the Buffaloes this season after averaging 10.1 points and 5.3 rebounds last season. He earned honorable mention All-Pac-12 team honors.

Forward Jabari Walker had an interesting experience during Colorado's four-game exhibition tour in Costa Rica in August — he shattered the backboard on a dunk attempt. The game was called.

The Buffs expect big things from Walker, who's already getting some notice from the NBA scouts for his athleticism. He averaged 7.6 points last season and made the All-Pac-12 Freshman team.

Walker’s best performance of the season was against Georgetown in the NCAA Tournament, when he scored a career-best 24 points. He was 5 of 5 from the 3-point line and 9 of 10 from the field. Walker is the son of Samaki Walker, a longtime NBA player who was part of the 2002 title-winning Los Angeles Lakers squad.

Jabari Walker likes what he sees in this Colorado team.

Colorado faces a formidable nonconference schedule, including the Paradise Jam in the U.S. Virgin Islands and an opening matchup with Southern Illinois. They could end up meeting either Creighton or Colorado State.

Colorado also will host third-ranked Kansas at CU Events Center on Dec. 21. A word from Boyle to season-ticket holders — don't sell them to Kansas fans.

“We’re asking and begging and pleading not to put them on StubHub and sell them to Jayhawk fans,” said Boyle, who played at Kansas. “I want the Buffaloes to have a great home-court advantage.”