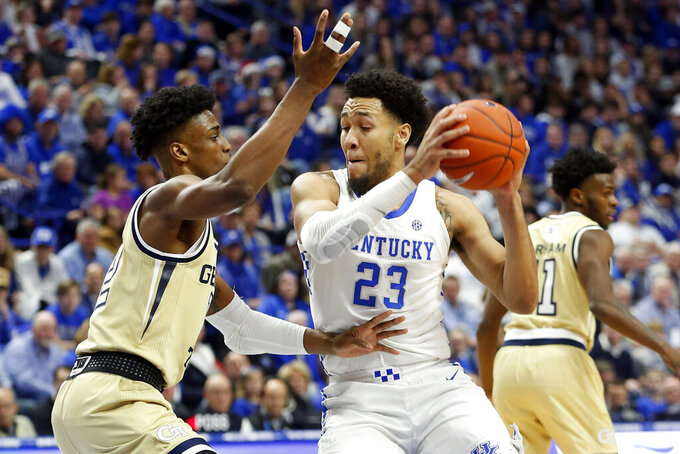 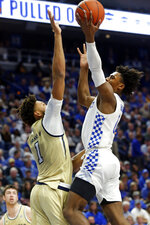 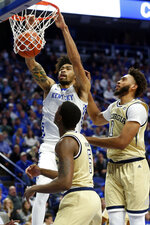 LEXINGTON, Ky. (AP) — Ashton Hagans has elevated his game, and Kentucky coach John Calipari has noticed the transformation in his point guard.

“He knows what to expect and he has no anxiety about what he is doing and knows coming into the game,” Calipari said. “He knows game planning and he'll watch tape, and he's so far advanced and again, there may be better point guards out there, I'll have to watch closely. The way he is playing, he's starting to master his skills.”

Hagans scored 21 points to lead No. 8 Kentucky to a 67-53 win over Georgia Tech on Saturday as the Wildcats (8-1) won their sixth straight game going into a two-game trip to Las Vegas ahead of their Christmas break.

Calipari improved to 18-0 against his former assistants. Georgia Tech coach Josh Pastner was an assistant to Calipari at Memphis and took over there when Calipari was hired at Kentucky in 2009.

Like Calipari, Pastner has been impressed with Hagans' improvement.

Hagans was happy with his performance with the exception of six turnovers.

“I had a lot of unforced turnovers, but I just tried to do what I could do to get my team a win,” he said. “I just want (the game) to keep coming to me and keep playing on the defensive end, talk to the guys and be more of a leader out there. I try not to focus in the offensive end too much. I just want to let it (come to me) as much as possible.”

Hagans scored eight of Kentucky's first 11 points and led the Wildcats with 11 points in the first half. He finished with seven assists and seven rebounds. Immanuel Quickley tied a career high with 16 points, Nick Richards scored 12 and Keion Brooks Jr. contributed 10 points off the bench.

Kentucky trailed 26-21 with 7 minutes remaining in the first half, but scored 13 of the next 15 points to regain the lead for good. Kentucky outscored the Yellow Jackets 15-4 the remainder of the half and led 36-30 at halftime. The Wildcats stretched the margin to as much as 16 points in the second half.

Moses Wright led the Yellow Jackets (4-4) with 13 points, followed by Bubba Parham and Khalid Moore with 10 points each.

Parham, a junior guard who transferred from VMI, returned to Lexington more than a year after he made 10 3-pointers and scored 35 points in VMI's 92-82 loss to the Wildcats last season. Parham scored 30 points nine times last year.

Kentucky freshman Dontaie Allen was honored before the game with his Kentucky Mr. Basketball ring from the Kentucky Lions Foundation. Allen played at Pendleton County and tore his ACL, missing most of his senior season. Allen has yet to play this season and returned to practice last week.

Kentucky could move up a spot following top-ranked Louisville's loss to Texas Tech in the Jimmy V Classic Tuesday at Madison Square Garden.

Kentucky: After playing eight of their first nine games at home, the Wildcats will play twice in Las Vegas, beginning Wednesday against Utah. Kentucky then plays No. 3 Ohio State Saturday in the SBC Sports Classic. The Wildcats host top-ranked Louisville on Dec. 28.