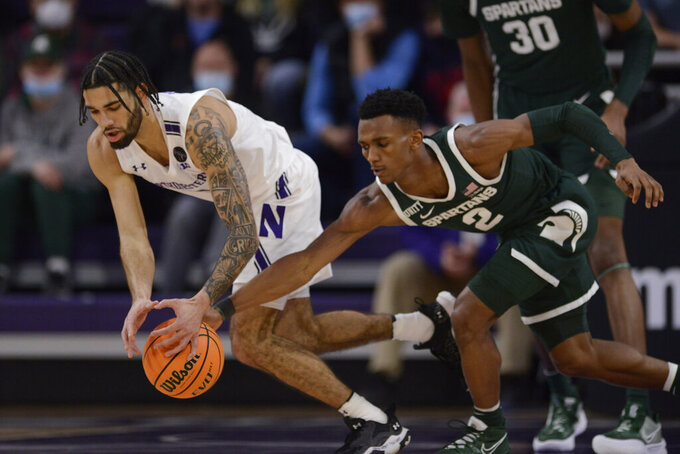 EVANSTON, Ill. (AP) — Gabe Brown scored 15 of his 20 points in the second half, Marcus Bingham Jr. added 13 and No. 10 Michigan State rallied from a 13-point first-half deficit for a 73-67 victory over Northwestern on Sunday.

Pete Nance had 13 points before fouling out and Boo Buie and Chase Audige had 12 points apiece for Northwestern (8-3, 1-1).

“Still disappointed in some things we did and really encouraged by other things we did,” Michigan State coach Tom Izzo said. “All in all, to beat a team that I think is a damn good team — they're gonna beat some people here — and we beat them on the road, I'll take the win and get out of here.”

Northwestern beat then No. 4 Michigan State 79-65 at Welsh-Ryan Arena last season. The Wildcats led virtually the entire first half and had a 31-18 advantage following a Nance basket with just over three minutes left before the break.

“We had our chances," NU coach Chris Collins said. "If you had told me that at the end of the game Nance, Buie and Audige would be 10 for 40 (from the field) and we would have the ball down by two with a minute to go and a wide-open 3 to take the lead, I don't know that I would have said that would be true. But that shows the kind of guys we have and the fight we have.”

The Wildcats led 33-26 at halftime after holding Michigan State to 9-for-27 shooting, including 1 for 10 on 3-pointers, in the first half.

The Spartans picked up the pace at the start of the second half, putting together eight straight points — capped by a short jumper by Brown — to grab a 36-35 lead with 17 minutes. It was MSU's first lead since the opening minutes of the first half.

MSU led 52-44 with just under 10 minutes left before NU put together a 13-5 spurt for a tie at 57, but Michigan State ran off eight straight points to regain command with 4 1/2 minutes to go.

The Spartans, though, went scoreless for nearly four minutes as Northwestern pulled within 65-63. Brown then essentially put the game away with a 3-pointer with 49.1 seconds remaining.

“Gabe likes to take the big shots; he likes to take any shot,” Izzo said. “But I really do appreciate that about him, that he's not afraid of the moment.”

The second half was marred by a combined 36 fouls and 51 free-throw attempts.

“Not a fun game,” Izzo said. "There were seemingly fouls every minute. I felt bad for the officials. I think the rules committee really has to look at some things. It was both ways. You could tell neither one of us was real happy, and the officials weren’t either.”

Michigan State: The Spartans also trailed at halftime in their last game against High Point before rallying in the second half for an 81-68 win. Although they overcame a 13-point deficit on Sunday, uneven performances won't lead to much success in conference play.

Northwestern: The Wildcats aren't going to overwhelm anyone with talent in the ultra competitive Big Ten, so the key to their success will be the effort on the defensive end. Northwestern held Maryland to 17-for-59 (28.8 percent) in the conference opener last month. Still, the Wildcats will need more production on the offensive end to win games.