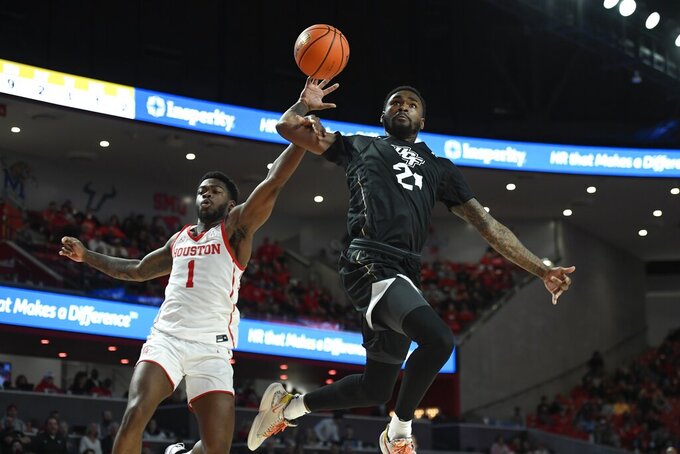 Jamal Shead chipped in 12 points and eight assists, and Kyler Edwards finished with 10 points, nine rebounds and seven assists for the Cougars (21-4, 10-2 American Athletic Conference). Houston shot 44% but struggled from behind the arc, going 7 of 23.

“They zoned us tonight,” Houston coach Kelvin Sampson said. “I thought our shot selection was outstanding. … We had a couple maybe, but for the most part, I don’t think we took but one bad 3, and that got blocked. Every other 3 was wide open. If we made four more of those, that’s a good shooting night.”

The Cougars outrebounded UCF 47-38 and held a 36-14 advantage in points in the paint.

Houston had lost two straight games for the first time in five years. Before the losing skid, the Cougars were on a 12-game winning streak.

“Every team is going to have ups and downs during the course of the season,” Sampson said. “That’s why I try to educate people about not getting too high when you win games and certainly don’t get too low when you lose them. Playing in these leagues, especially with what these kids have been through this year, you’re going to lose games.”

Houston jumped out to a 17-5 lead, capping off a 13-0 run with a layup by J’Wan Roberts with 11 minutes remaining in the first half, but the Knights responded with a 10-0 run to cut the lead to two on dunk by C.J. Walker with 5:47 left in the first half.

“You give (Houston) credit for that,” Dawkins said. “They make you miss shots. They’re one of the best defensive teams in the country, and that’s for a reason. They make every shot difficult, and even when we got some open looks, they are so rare and far between, we couldn’t find a rhythm.”

Houston: The Cougars helped their NCAA Tournament resume with the win. … The Cougars finished with 18 assists on 26 made field goals. … Houston finished with eight blocks as a team, led by Josh Carlton and White who had three blocks each.

“It’s great to finally get it out of the way,” White said. “I think my teammates wanted it a little bit more than I did. That shows you how close we are. It’s a blessing. I thank all my coaches and teammates I’ve had over the years.”