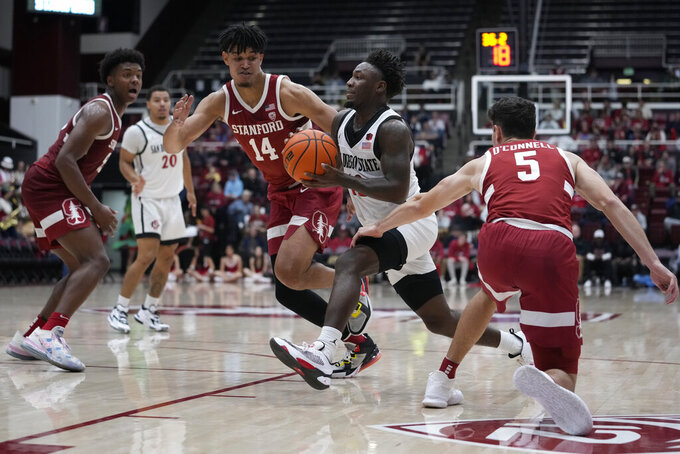 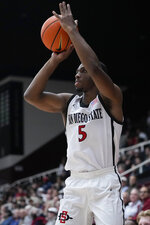 “We play pretty hard against anybody we play,” San Diego State coach Brian Dutcher said. “I told them that we’re on a really hard five-game stretch — BYU at home, Stanford at home and then three in Maui. Let’s see how we do, if we’re ready for that kind of challenge."

Lamont Butler had 11 points and six assists and Keshad Johnson added 11 points for the Aztecs.

“We knew coming in it would be a battle and we’d have to play our A game to be able to get there,” Stanford coach Jerod Haase said. “I don’t think we played our A game but I also think that they certainly deserve a lot of credit for playing really well.”

“We kind of jumped on them in that first half a little bit and then they kind of fought back, as I thought,” LeDee said. “We knew that they were going to fight back. They’re at home. They’re talented. It’s just a little adversity for us. But we just kept wearing them down.”

“I was most pleased that our point guards had 12 assists and one turnover,” Dutcher said. “That kind of play from the point guard position will get you wins.”

San Diego State: The Aztecs were victorious in their first road game of the season, fighting off every Stanford run in the second half. San Diego State displayed its depth and balance offensively, along with its usual tenacious defense. The Aztecs showed why they were picked first in the preseason Mountain West poll.

Stanford: After winning their opener, the Cardinal have lost back-to-back games against Wisconsin and San Diego State. Stanford fell behind early and was never able to get closer than six points in the second half, struggling to solve the Aztecs’ stout defense.

Haase remains one win shy of 100 at Stanford, falling to 99-92. His overall record is 179-145. ... Former NFL quarterback Alex Smith attended the game and served as an honorary Stanford captain.