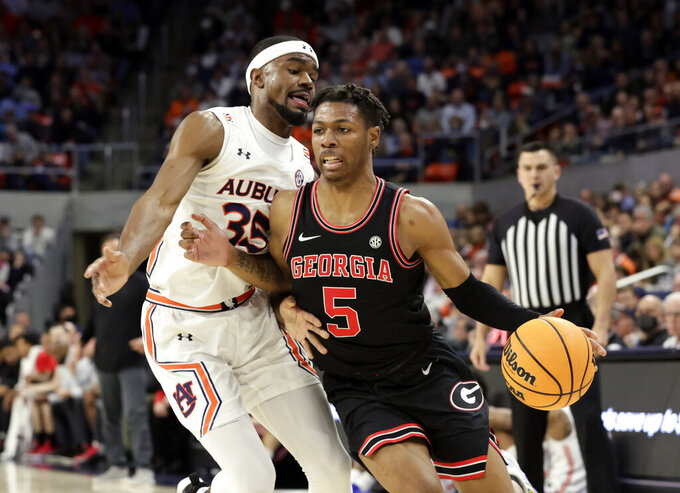 Georgia guard Christian Wright (5) is fouled by Auburn guard Devan Cambridge (35) as he goes to the basket during the first half of an NCAA college basketball game Wednesday, Jan. 19, 2022, in Auburn, Ala. (AP Photo/Butch Dill)

AUBURN, Ala. (AP) — Streaking Auburn didn’t let up even with its highest ranking in more than two decades and a bigger game looming.

Walker Kessler had 15 points and six blocked shots to lead a half-dozen scorers in double figures for No. 2 Auburn in an 83-60 rout of Georgia on Wednesday night. Next up: No. 12 Kentucky on Saturday.

“We didn’t talk about Kentucky at all coming into this game,” point guard Wendell Green Jr. said. “We always want to respect our opponent no matter what their record is, and that’s what we did tonight.”

The Tigers (17-1, 6-0 Southeastern Conference) built a 25-point lead by halftime and coasted to their 14th consecutive win, tied with Davidson for the nation's longest current streak. It's their best SEC start in 63 years after flirting with the program's first No. 1 ranking.

“You know, we got outplayed in the second half,” Pearl said. "Georgia played hard the whole time, as you knew they would, but we did what we needed to do.”

The Tigers are the only SEC team without a league loss after No. 12 Kentucky's win over Texas A&M.

Green had 11 assists and four steals against the Bulldogs (5-13, 0-5), the only SEC team without a league win.

“Wendell did such a special job getting the ball to the right people at the right time,” Pearl said. “Wendell was having fun out there, which I love to see.”

Aaron Cook, a so-called super senior, became just the 18th Division I player to play in 150 games and scored nine.

Georgia was without leading scorer Kario Oquendo with a lower body injury, which coach Tom Crean said was a pregame decision.

Held scoreless most of the first half, Johnson hit three 3-pointers in a three-minute span against his former team. That hot streak helped the Tigers build a 52-27 lead, their largest halftime advantage of the season.

The Bulldogs got as close as 16 in the second half when Auburn missed eight straight shots.

“We had a chance and it's still a long game with eight minutes left and then we had a couple of costly turnovers and they capitalized,” Crean said. “They do a really good job of capitalizing.”

Georgia lost its seventh straight game and wasn't ever really in this one after the first few minutes. Was outrebounded 41-31.

Auburn is trying to state a case for the top spot in the rankings after receiving more No. 1 votes than newly top-ranked Gonzaga.

Auburn hosts No. 12 Kentucky Saturday in perhaps the biggest game at Auburn Arena since it opened in 2010. “It'll be a clash of the titans for sure,” Pearl said.