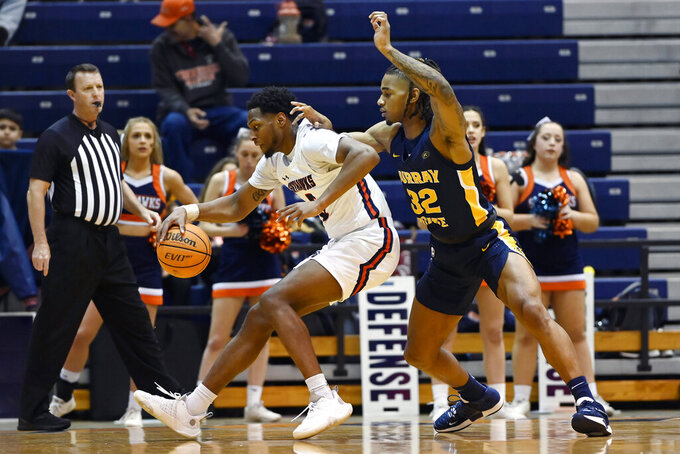 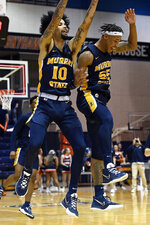 MARTIN, Tenn. (AP) — KJ Williams showed up when No. 21 Murray State needed him the most.

UT Martin guard KJ Simon missed a 3-pointer attempt at the buzzer, and Murray State had its 16th straight win in hand.

“That was a big-time play" Murray State coach Matt McMahon said of Williams' work. "Trae Hannibal set a big-time screen, and the window to get the ball there was not huge and Tevin (Brown) delivered. … Great credit to him for the delivery and KJ for the catch, the finish and the completion at the free-throw line.

The Racers were down 59-54 with under three minutes left, and made only two baskets in the final nine minutes.

Tevin Brown made five 3s and scored 18 points for Murray State (26-2, 15-0 Ohio Valley Conference). The Racers have won 10 in a row against UT Martin.

The Skyhawks took a quick 7-0 lead and shot 65 percent in going up 33-27 at halftime. But they started the second half with a shot-clock violation and then proceeded to go 1 of 7 from the field, helping Murray State go on a 12-2 run.

“We got a strong mentality as a team, and we are going to fight until the final buzzer goes off whether we are down 20 points or up 20,” Brown said.

Despite the loss, UT Martin coach Ryan Ridder was pleased with his team's defense.

“If you would’ve told me that we would hold Murray State to 34% from the field and they would make only 12 free throws, I think we all would’ve signed up for that,” he said.

UT Martin: The Skyhawks played the final 27 minutes without KK Curry, who went down with a lower back injury and did not return. Curry had a career-high 24 points in the Skyhawks' last game versus Morehead State.

Murray State: The Racers, who are second in the conference in field-goal percentage, only made 33.9% of their shots.

This win could be enough to move Murray State into the top 20 when rankings come out Monday.

Murray State: Will host their last home game vs Belmont on Thursday night.