No. 22 Saint Mary's bounces back from loss, thumps San Diego 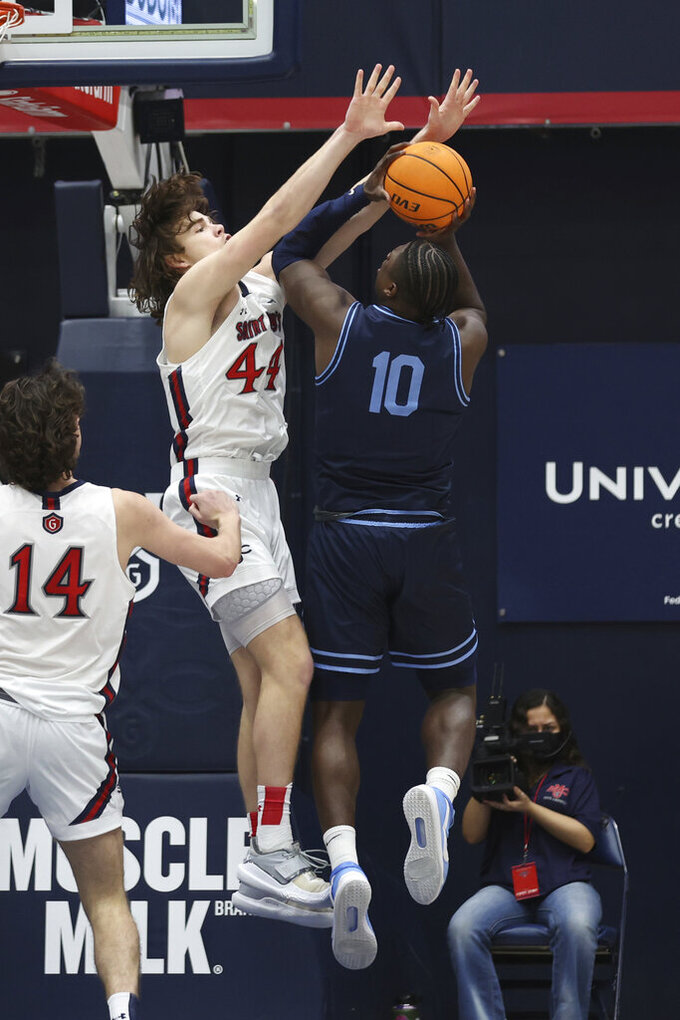 MORAGA, Calif. (AP) — Logan Johnson had 16 points, a career-high nine rebounds and five steals, and No. 22 Saint Mary’s bounced back from its first loss in a month to beat San Diego 86-57 on Thursday night.

Two days after losing to Santa Clara in its first game since entering the rankings, Saint Mary’s dominated San Diego on both ends to give coach Randy Bennett his 15th 20-win season.

“Logan was inspiring tonight, just how hard he played that first half,” Bennett said. “He showed tremendous leadership by that. He’s an elite defender. He’s as good as anybody in this league. He just brought that intensity.”

The Gaels led by 21 at halftime, scored the first eight points coming out of the break, then went on another big run to extend its winning streak over the Toreros to 15.

Johnson provided the spark with his scoring and defense — and got a small red welt under his left eye to show for it.

“It was really important to get out to a good start tonight just for ourselves, our confidence,” Johnson said. “Before the game even started we came in here and were like, ‘We have to be the first team to punch somebody in the mouth. We can’t just keep taking shots.’”

Marcellus Earlington had 14 points and eight rebounds for San Diego. The Toreros (13-12, 6-6) have lost three straight.

Saint Mary’s started slowly, then pulled away once its defense settled in.

Johnson made steals on back-to-back possessions, ending one possession with a dunk and the other with a layup as part of a 17-1 run that put Saint Mary’s ahead by 20.

“It starts with moving the ball, sharing the ball,” Bennett said. “We’ve just gotten a lot better there from Christmas until now.”

Josh Parrish scored on a driving layup to end San Diego’s nearly eight-minute drought without a basket, but Kyle Bowen made a buzzer-beating 3-pointer from the left corner to give the Gaels a 42-21 lead.

Before every game, Johnson grabs an imaginary bag and takes it to every teammate and some staff members, asking them to put something into it.

“I’ve done it every game since I got here,” Johnson said. “I find it important to get everybody to throw something in the basket. They don’t have to tell me what it is. It’s somebody taking whatever they have and whatever they can give to the team and throwing it in that bag. We carry that bag on our shoulders.”

Bennett said he was unaware of the ritual.

“He doesn’t ask me for anything,” laughed Bennett. “He just gives me a chest bump.”

Beating San Diego won’t erase the stain from Tuesday’s loss to Santa Clara and probably isn’t enough to keep the Gaels from falling out of the Top 25. Beating No. 2 Gonzaga on Saturday, however, could change things for Bennett’s team.

San Diego: The Toreros couldn’t handle the Gaels’ defensive pressure and it was costly. San Diego made two shots in a 13-minute span between the two halves and shot 37.3% for the game. One of the few bright spots was Terrell Brown-Soares, who had four blocks to give him 61 on the season.

Saint Mary’s: A blowout over a conference opponent was just what the Gaels needed. It also allowed Bennett to rest his starters for most of the second half, which could be big heading into Saturday’s game against conference-leading Gonzaga. Johnson was very active defensively and gave San Diego a night-long headache with his pass deflections and steals.

Saint Mary’s: Face No. 2 Gonzaga in Spokane on Saturday.