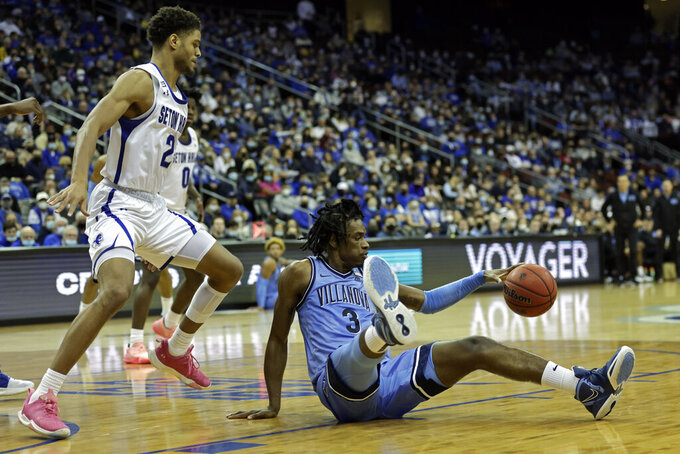 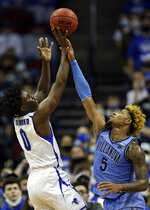 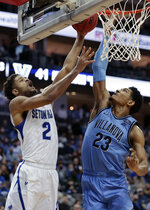 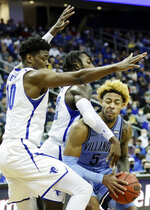 NEWARK, N.J. (AP) — Villanova coach Jay Wright isn't a big fan of playing on New Year's Day. It takes away from celebrating the night before and facing a tough and physical Seton Hall is never fun, even when they are shorthanded.

Justin Moore hit a go-ahead jumper with 1:36 to play and No. 22 Villanova dominated inside and hit late free throws to post a 73-67 victory over gutsy No. 15 Pirates on Saturday.

“There is no way we came in here thinking they are down two starters this is going to be an easy game,” Wright said.

It wasn't and the game wasn't decided until the final minutes, which is the norm when these long-time Big East Conference rivals play.

“It's a good win for us to come in and have a tough night shooting because of their defense and physicality and finding a way to win,” Wright said after seeing his team turning the ball over 17 times and shoot 44% from the field.

Backup guard Bryce Aiken had 22 points to lead Seton Hall, which has lost the last two games playing with only eight players because of COVID-19 issues. Jared Rhoden added 13 and Jamir Harris had 12, all on 3-pointers, for the Pirates (9-3, 0-2).

“We're still in a good spot,” Seton Hall coach Kevin Willard said. “We're still a very good basketball team. Losing two games is not going to change that when you have eight guys.”

Seton Hall had three players foul out with Myles Cale picking up his fifth foul and joining Alexis Yetna and Tray Jackson on the bench with less than a second to play. Yetna had 10 points and eight rebounds.

The final five minutes took almost 15 minutes to play with all the timeouts and the free throws.

Villanova's play on the offensive glass was the key. Moore's go-ahead shot gave the Wildcats a 62-61 lead and it came after Gillespie missed and 3-pointer and Bryan Antoine got the rebound. After a Pirates miss, Slater made two free throws for a 64-61 edge after another offensive rebound. Another Gillespie free throw pushed the lead to five points.

“He does so many things that impact the game,” Wright said of Moore. “He hit the huge jumper late in the second half when we were down one. He is just that kind of player.”

Seton Hall got within two points twice in the final 10 seconds but Villanova made 11 of 12 free throws down the stretch to post its fourth straight win over the Pirates.

“I have the utmost faith in this team,” Harris said. “I believe in every guy, 1 through 13 or 15, all our players, I believe in every one. We work really, really hard on unselfish and we care about winning. I feel like we showed that every time we go out on the floor, so tonight was another example.”

Villanova: The Wildcats have a talented roster and have all the components. They can shoot, rebound and play defense. It's a typical Jay Wright team build for a post-season run. The four losses is not a good number but they included losses to No. 1 Baylor, No. 3 Purdue and No. 5 UCLA. They also were missing a key player with guard Caleb Daniels, who was averaging almost 10 points and 4 rebounds. He was on the COVID-19 list.

Seton Hall: The Pirates probably are going to fall out of the Top 25 after two straight losses. While it may seem unfair playing shorthanded, the only key player they are missing statistically is junior forward Tyrese Samuel. He is averaging 10.8 points and 6.9 rebounds. Center Ike Obiagu doesn't contribute big numbers but he is a force in the of the defense.

Villanova: Returns home to play Creighton for the second time this season. The Bluejays won 79-59 on Dec. 17.

Seton Hall: At Butler on Tuesday.