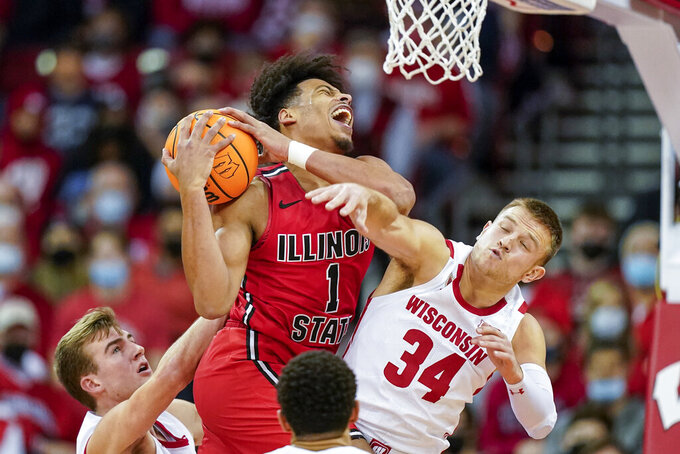 MADISON, Wis. (AP) — Steven Crowl had a career-high 21 points and nine rebounds, and No. 24 Wisconsin struggled to put away Illinois State, winning 89-85 on Wednesday night in its first game after a two-week break because of COVID-19.

Johnny Davis, the Badgers' leading scorer, had 20 points on 6-of-23 shooting and 11 rebounds. Second-leading scorer Brad Davison was held to seven points on 1-of-9 shooting.

”I thought we were sporadic on both ends of the floor,” Wisconsin coach Greg Gard said. “We looked like we hadn’t been doing much for 14 days.”

Tyler Wahl tied his career high with 18 points while Chucky Hepburn had 13 for Wisconsin (10-2).

Illinois State (8-6) battled back from a 19-point deficit early in the second half and got within 81-80 on Antonio Reeves’ 3-pointer with 2 minutes left. After a Davison miss, Illinois State had a chance to take the lead, but Reeves’ floater was off the mark.

Reeves then committed his fifth foul on Wisconsin’s next possession, putting Davison on the line, where he hit both shots.

“I think the game and the moment hit our nerves a little too hard,” Illinois State coach Dan Muller said. “The second half it wasn’t nerves. We had guys who played so hard that we let up a little bit.”

Reeves led the Redbirds with 23 points, while Sy Chatman had 22. Chatman also fouled out late in the game on a charge, and Wisconsin closed it out by going 8 for 8 from the free-throw line.

“I think you saw some good glimpses and some bad glimpses,” Wahl said. “It was just we were up by a lot and kind of got relaxed and let them come on and had to figure things out. Kind of Jekyll and Hyde, like coach Gard says.”

Illinois State lost starting guard Mark Freeman in the first half when he twisted an ankle while coming down with a rebound. Without their primary ball-handler, Muller said the Redbirds were limited in what they could run offensively.

Wisconsin hadn't played since squeaking past Nicholls State 71-68 on Dec. 15. Its scheduled game last week against George Mason was canceled because of COVID-19, and the last thing the Badgers wanted was a nearly three-week layoff before traveling to No. 3 Purdue to resume Big Ten play. They got a scare from Illinois State, but at least they got back on the court.

The Badgers weren't at full strength, announcing before the game that five players would be unavailable, including top bench contributors Lorne Bowman II and Jahcobi Neath. Wisconsin didn't say why the players couldn't participate.

Isaac Lindsey, who had played six minutes all season before Wednesday night, played wearing a mask. He sank one of two 3-pointers he attempted in three minutes on the court.

Illinois State: At Valparaiso on Sunday.

Wisconsin: At Purdue on Monday.