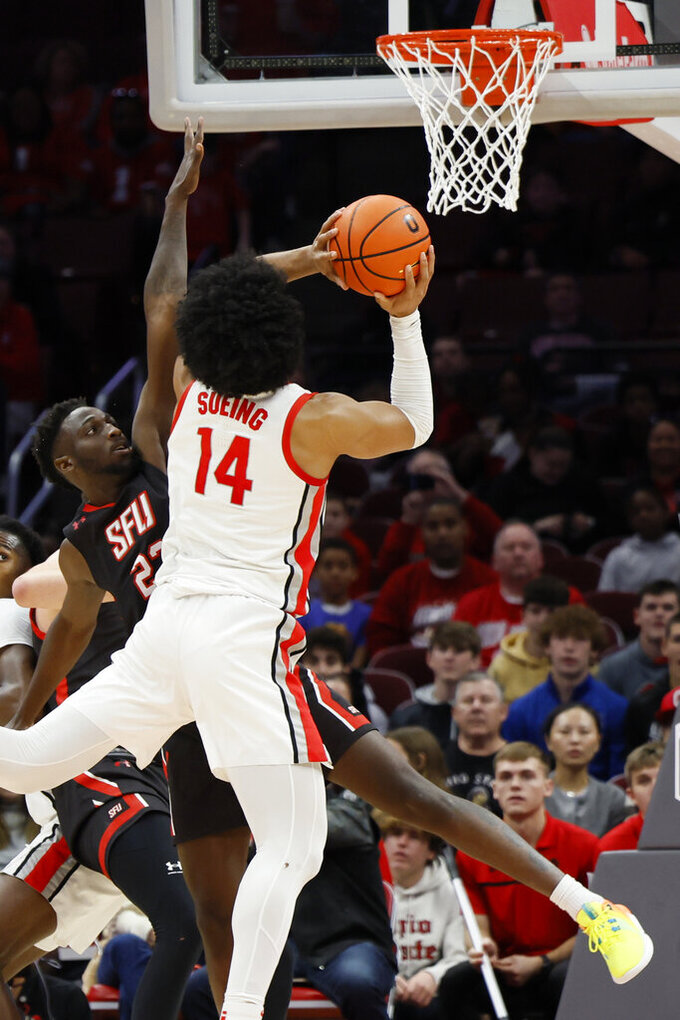 COLUMBUS, Ohio (AP) — Brice Sensabaugh led the Buckeyes with 15 points and Bruce Thornton added 13 as No. 25 Ohio State surged in the second half for a 96-59 win over St. Francis on Saturday.

The Red Flash trimmed a 16-point deficit to eight in the first half, with Josh Cohen getting the first points after the break. But Ohio State (6-2) went on a 13-5 run, held St. Francis (2-7) scoreless for about five minutes in the second half and at one point went up 39 points.

“I did not think we were nearly as good as we need to be in the first half,” Ohio State coach Chris Holtmann said. “But our guys responded and played well.”

Roddy Gayle Jr. had 12 points, Zed Key had 11 and Sean McNeil and Felix Okpara scored 10 apiece for Ohio State, which shot 50.7% from the field.

Cohen finished with 18 points and 10 rebounds for his first double-double of the season. Cam Gregory added a career-high 15 points and Maxwell Land scored 14 for the Red Flash.

“You can’t put yourself in those situations, No. 1, with those points in the paint because now everything gravitates towards protecting the paint,” St. Francis coach Rob Krimmel said. “When you open it up, those shots become a little bit easier but I think the physicality of it was a good lesson for these guys.”

St. Francis guard Brendan Scanlon is the grandson of former Ohio State guard Gary Milliken, who was part of the Buckeyes’ 1960 national championship team. Both were recognized on the court pregame.

After scoring at least 10 points in the first six of seven games, Sensbaugh returned to double figures against the Red Flash. He shot 2-of-6 for a season-low four points Wednesday at No. 17 Duke.

Sensabaugh missed a wide-open dunk attempt against St. Francis, but stayed focused to shoot 40% and make all four free throws.

“Playing through those mistakes is critical,” Holtmann said. “I don’t want it to affect the other end and his focus and attention to detail on the other end, and I think he had some good moments today with that”

The Buckeyes allowed an opponent to shoot under 45.5% for the first time in three games. They held a 47-25 edge on the glass, including 17 offensive rebounds, and forced 11 turnovers.

“We stuck to our principles and really dominated effort plays,” Holden said.

OKPARA ON THE GLASS

Okpara, 6-foot-11 and two inches taller than any other Ohio State player, posted the first double-double of his career as he brought down a game-high 12 rebounds in 16 minutes.

“Defense, that’s why I check in,” Okpara said. “For me, scoring right now is a bonus. I like to do the little stuff, like set screens, diving on the floor, and mainly just defense.”

St. Francis: The Red Flash grabbed five offensive rebounds and cashed in for only four second-chance points. It marked their fourth of five games in which St. Francis brought in six or fewer offensive boards.

Ohio State: Sensabaugh and Thornton had a trio of 3-pointers. The Buckeyes made 13 3-pointers, their most this season, after going a season-low 23.1% at Duke.

“Part of the Duke situation was just how they were playing,” Holtmann said. “They were really extended defensively so they don’t let you shoot a lot of 3’s, so some of that was more byproduct of how teams play defensively versus us. We’re always going to shoot 3′s.”