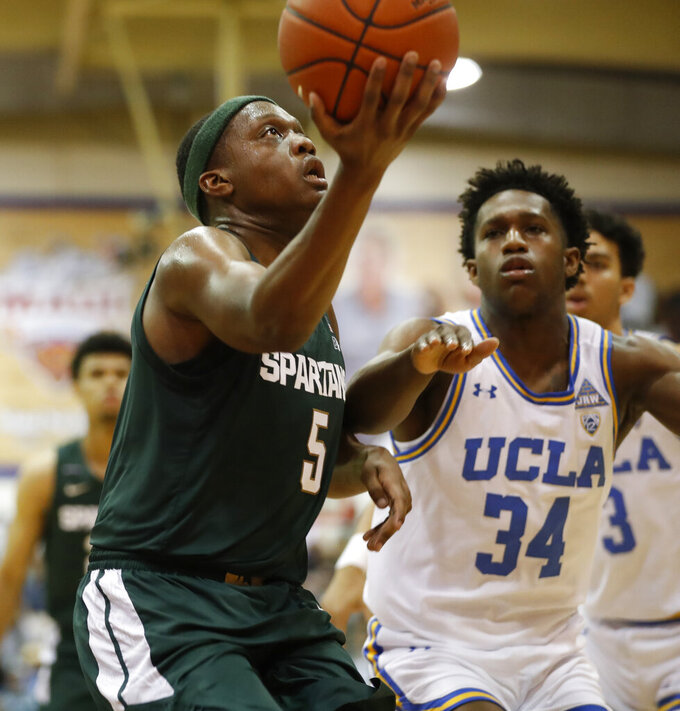 LAHAINA, Hawaii (AP) — Michigan State opened the Maui Invitational with an ugly loss, had to chase around a smaller team to win its second game and outlasted a long, athletic team to finish fifth.

The Spartans would have much rather won the championship, but the trip to paradise should help them in the long run.

Cassius Winston scored 20 points, Xavier Tillman had 14 and No. 3 Michigan State knocked off UCLA 75-62 in the Maui Invitational fifth-place game on Wednesday.

“We're going to leave here playing an ACC team, a SEC team, and a Pac-12 team, and it doesn't matter where they end up,” Michigan State coach Tom Izzo said. “If we end up playing somebody in that league in the tournament, we can kind of compare what they did against them, how they played them.”

The Spartans (5-2) opened the tournament with a loss to Virginia Tech, but bounced back with consecutive solid performances.

Winston had a second straight strong performance after struggling in the opener and Michigan State used an 18-2 advantage in fast break points to close its Maui trip with a flourish.

“We usually get time to practice and go back and watch film and learn what to do to get better,” Winston said. “This time we got punched in our mouth and then we had to play the next day. And I think we did a pretty good job of rallying and getting back out there and playing hard for the next couple days.”

UCLA (5-3) is young and talented but is still working on its cohesion early in the season. After beating up on host Chaminade, the Bruins struggled to get anything to fall from the perimeter, going 2 for 14 from the 3-point line.

Chris Smith had 13 points and Cody Riley scored 11 for UCLA.

“I think we're still learning. We learned a lot today,” UCLA first-year coach Mick Cronin said. “Guys learned about playing with their heart. So that's really what we talked about. You got play with your heart. That's 75 percent of it.”

Winston had to be coaxed out of the locker room by Izzo before the Spartans’ second game against Georgia. Winston is still trying to come to grips with the death of his brother Zachary on Nov. 9 and was weeping before the game against the Bulldogs.

Once on the court, the senior guard responded with one of his best games of the season, scoring 28 points and dishing out eight assists. He also made big plays down the stretch to help Michigan State overcome Anthony Edwards’ 33-point second half.

Winston was sharp in the first half against UCLA, scoring 10 points on 4-of-9 shooting to help the Spartans build a 26-23 lead.

Michigan State opened the second half with a quick 10-2 run to go up 36-25 and pushed its lead to 15 points midway through.

UCLA tried to make a run, but the Spartans made 14 of 26 shots in the second half to keep the Bruins at bay.

“We knew coming in defense was going to win this game,” UCLA’s Prince Ali said. “If we had been able to replicate what we did in the first half, I think we would have had a better chance of winning this game.”

UCLA is still trying to find its way under Cronin. The Bruins lost two games in Maui and their only win was over Division II Chaminade.

Michigan State also is still sorting through things with Winston grieving and guard Joshua Langford out until at least January with a foot injury. The Spartans still won two games in Maui, against quality opponents.

Michigan State will likely fall a few notches in Monday’s AP Top 25, but it may not be quite as far as it would have been after No. 1 Duke lost to at home to unranked Stephen F. Austin.