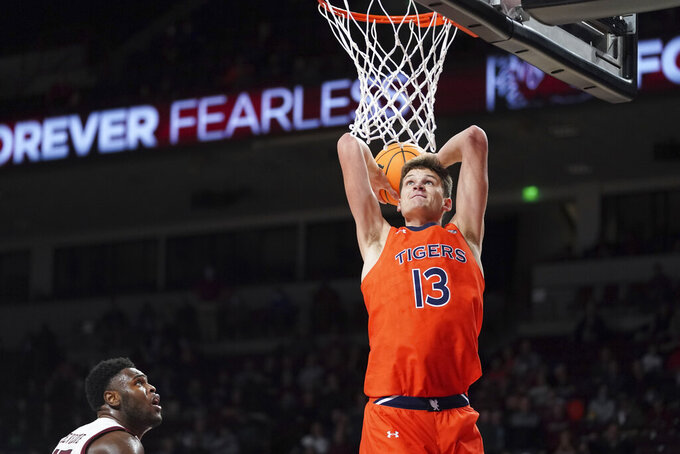 COLUMBIA, S.C. (AP) — Wendell Green Jr. is proving once he enters a game for Auburn, he's hard to sub out.

Green had a season-high 22 points off the bench to lead the ninth-ranked Tigers to their 10th straight victory, 81-66, over South Carolina on Tuesday night.

Green was pretty much unstoppable at South Carolina (9-4, 0-1 Southeastern Conference), especially in the first half when his 14 points opened a double-digit lead.

When the Gamecocks sliced a 21-point deficit to 63-55 with about seven minutes, it was Green who stepped forward again with a pair of foul shots as Auburn (13-1, 2-0) opened league play with two straight wins for the first time in four years.

Green, who started Auburn's first three games, has found a comfortable home off the bench. Green's reached double figures in six straight games. “I’m just locked in right now," he said. "I just want to be consistent, and that’s what I’ve been trying to do.”

Green has also been a steadying influence on team, Pearl said.

Auburn made the Top 10 for the first time this season — and fourth time in the past five seasons — and had little trouble justifying its lofty spot most of the way against the Gamecocks.

Green got things going when he came in The 5-11 sophomore made six of 10 shots and grabbed five rebounds in the first 20 minutes. Green had six points in a 17-5 run by the Tigers to take control.

Green had a three-point play to increase the margin to 12 points. When he blew by the defense for an uncontested layup two minutes later, a frustrated South Carolina coach Frank Martin called time out.

Nothing the Gamecocks did stopped Green, who moments later connected on a long, floating 3-pointer several feet behind the line to go up 44-27.

Kessler, the North Carolina transfer, was coming off a triple-double (16 points, 10 rebounds, 11 blocks) in Auburn's win over LSU last time out.

And Kessler was a presence in this one, his length keeping South Carolina from getting close the basket as Auburn outscored the Gamecocks 24-8 on points in the paint.

The Tigers hadn't won this many in a row since notching 12 straight victories late in the 2018-2019 season. That streak came to an end in the Final Four, a 63-62 semifinal loss to Virginia.

Stevenson acknowledged the Gamecocks fight in cutting Auburn's lead. “We can look at all the positives, ‘Oh, we did this, we did that,’” he said. “But we did more bad than good. We lost by 15 at home.”

Auburn: The Tigers are playing like the class of the SEC right now, following up a win over ranked LSU with a dominant showing for their fourth straight win over South Carolina. Auburn shot 53 percent (29 of 55), its best showing of the season.

South Carolina: The Gamecocks, with nine new faces on the roster, have already zoomed past last year's win total in a disastrous 6-15 season. But the team is not ready to match up with the deeper, more talented teams in the SEC.

Auburn's Zep Jasper scored 13 points, second most on the Tigers, in his return to the Palmetto State. Jasper played three seasons at the College of Charleston before transferring to the Tigers. He averaged 15.6 points a game for the Cougars last season. In this one, the 6-1 Jasper hit four of five shots — hitting both his three-point attempts — in 24 minutes.

Forward Keyshawn Bryant, the team's top returning scorer from last season, played just four minutes after hitting the ground hard after a first-half shot. Bryant came out after halftime with a sling around his left arm and shoulder. The 6-6 senior was suspended the team's first five games. He's averaged 9.1 points since his return. Martin said Bryant had a shoulder sprain. “That's all we know so far,” he said.