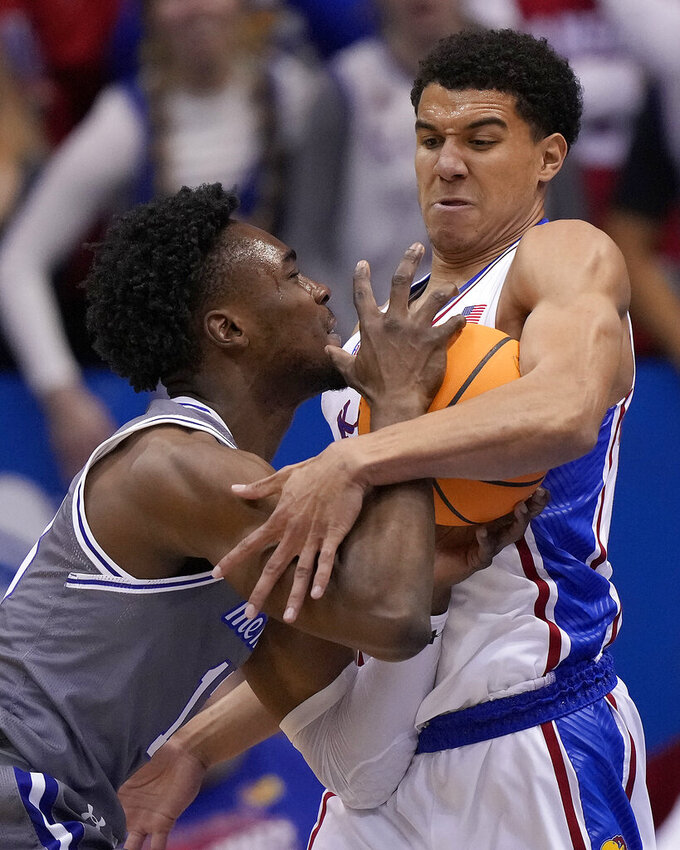 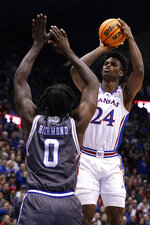 LAWRENCE, Kan. (AP) — Kansas forward Kevin McCullar Jr. claimed the Jayhawks have “so many weapons that anyone can score 10-plus a game.”

Just about everyone did Thursday night.

McCullar returned from an injury to score 17 points and grab 10 rebounds, Jalen Wilson added 15 points and 13 boards, and six players hit double-figures for the No. 9 Jayhawks in their 91-65 victory over Seton Hall in the Big East-Big 12 Battle.

Gradey Dick also scored 15 points, KJ Adams contributed 11, DaJuan Harris Jr. had 10 with seven assists and Ernest Udeh Jr. finished with a career-best 10 for the Jayhawks (8-1), who now have more than a week to wait before they visit bitter rival Missouri for the first time in a decade next Saturday.

The Jayhawks romped past the Tigers 102-65 last year, when they resumed their series after a nine-year hiatus following Missouri's departure for the SEC. Kansas has not faced them on the road since losing on Feb. 4, 2012.

“There's no reason we shouldn't be rested before we play Mizzou,” Jayhawks coach Bill Self said, “and there's some things we definitely need to work on. Hopefully we'll be better equipped when we go over there.”

Kadary Richmond had 17 points, but also turned the ball over seven times for the Pirates (4-4), who were just 4 of 19 from the 3-point arc in losing their third straight game. Tyrese Samuel added with 16 points.

“Everything is a lesson. You can take a lesson out of this,” said Shaheen Holloway, who's in his first season coaching his alma mater. “You have to give those guys credit. They came out and played hard.”

The teams were meeting for just the third time and first since 2018, when the Jayhawks edged Seton Hall in the second round of the NCAA Tournament. They went on to play for the national championship this year.

Now the defending champs, Kansas built a big first-half lead against the Pirates on Thursday night. But rather than going on one of their familiar runs to take control of the game, the Jayhawks methodically extended their advantage over the first 20 minutes, taking advantage of their speed on the perimeter to get easy baskets at the rim.

“It's about us finding the best shot,” said McCullar, who'd been dealing with a sore groin, “and playing together.”

Kansas led 40-29 at the break. Harris was 4 for 4 by that point with five assists, the best of them coming midway through the half, when the diminutive guard found Adams for an ally-oop dunk that turned into a three-point play.

“It's great when we can all move the ball, share the ball and score,” Udeh said.

The Pirates missed their first eight from beyond the arc, went 19 of 32 from the foul line and rarely got anything to go that wasn't at the basket. And that made digging out of their halftime hole seemingly impossible.

The poor shooting, coupled with turnover problems, proved too much for Seton Hall to overcome.

“Free throws. If we can make free throws, we're right there,” Holloway said. “We started to throw the ball away and were not making our free throws. I thought that was the difference.”

Seton Hall was similarly poor from beyond the arc in losses to Iowa, Oklahoma and Siena, when the Pirates were 1 for 9 from the 3-point line in a 65-60 defeat their last time out. They were 20 of 32 from the foul line in that game.

Kansas forced the Pirates into 16 turnovers while committing 11 of their own, and they had a big edge on the boards, which meant the Jayhawks simply had more opportunities on the offensive end. They took advantage of them, too.

Kansas has the week off before visiting the Tigers.