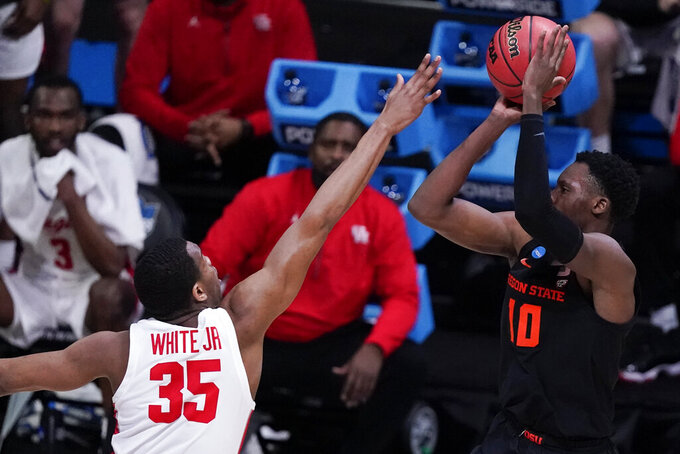 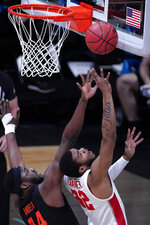 INDIANAPOLIS (AP) — Oregon State hardly looked like a No. 12 seed the first two weeks of the NCAA Tournament.

For a while Monday night, the Beavers sure did.

Yet facing a 17-point second-half hole, the plucky Pac-12 upstarts showed the kind of ferocious defense and determination against No. 2 seed Houston that brought them to their first Elite Eight in nearly three decades. They came all the way back with a frantic rally, only to watch the Cougars hang on for a 67-61 victory and a spot in the Final Four.

The heartbreaking loss ended a charmed late-season run for Oregon State (20-13), which was making just its second trip to the NCAA Tournament since 1990 and was part of a big showing by its often-overlooked conference.

“It was a hell of a run,” Oregon State coach Wayne Tinkle said from his hotel room, after the NCAA's technical difficulties for postgame interviews gave him more than an hour to digest the loss. “The guys were down. There were tears. I think they understood how hard we fought to get back in the game and how we squandered it.

“But I'm thankful for the staff and people around me that boosted us back up,” Tinkle added, “and I'm proud of the effort of this group. We showed amazing heart, fight, and we got every ounce out of this group that we could.”

Picked to finish last in the Pac-12, the Beavers beat five AP Top 25 teams, the most since their 1975-76 team won the same number. They won their first game in the Big Dance since 1982, tied the 1963 Final Four team for the most tourney wins in school history with three, and matched Missouri in 2002 as the worst-seeded team to reach the Elite Eight.

All-Pac 12 guard Ethan Thompson, who ushered the bubble-dwelling Beavers into the tourney with a stunning conference tournament title, struggled all night before coming alive down the stretch. He had 11 points and seven boards, and was the catalyst during a 17-3 run midway through the second half that gave Oregon State a chance.

“In the back of our minds,” Thompson said, “we knew a run was coming for sure.”

But Quentin Grimes coolly knocked down a 3-pointer at the other end to give Houston the lead back. And after Thompson hit the second of two free throws, Grimes added two of his own to make it 60-56 with 2:22 to go.

Hunt missed a 3-pointer for Oregon State. So did Jarod Lucas. And while the Cougars (28-3) were having plenty of free-throw problems of their own, they made enough down the stretch to earn their first Final Four trip since 1984.

“We just started settling," Tinkle said. “We got a little too individualistic, and even down the stretch, when we got it tied up, we kept reminding the guys in the timeouts about our discipline, our character, and unfortunately we broke down a little bit and they were able to pull it out.”

Only four No. 11 seeds have made the Final Four, including Loyola Chicago, which the Beavers beat in the Sweet 16 last weekend. But nobody seeded any worse had reached the final weekend, and that wasn't lost on Tinkle or his team.

Even as they walked off the court inside Lucas Oil Stadium, they held their heads high.

“There were a lot of tears shed in the locker room," Tinkle said, "and we told the guys, ‘Remember how this feels. We came back after being down 17 and tied this thing up. Those plays down the stretch, we lost our discipline, we lost our character a little bit, but the overwhelming thing, we showed incredible heart and grit. We came together, we put the team first, and that's how we got on this run.' That's what we'll focus on.”