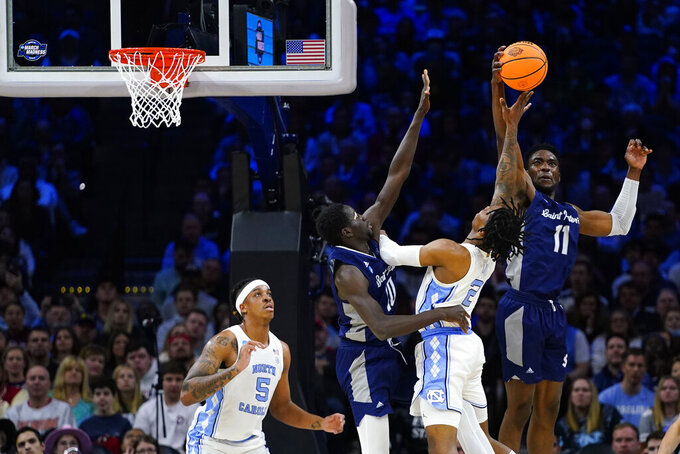 North Carolina's Caleb Love (2) cannot get a shot past St. Peter's KC Ndefo (11) and Fousseyni Drame (10) during the first half of a college basketball game in the Elite 8 round of the NCAA tournament, Sunday, March 27, 2022, in Philadelphia. (AP Photo/Chris Szagola)

PHILADELPHIA (AP) — Saint Peter's coach Shaheen Holloway pulled his starters off the court as the seconds ticked down and would not let them wallow in defeat. The Peacocks locked arms for one final team huddle — Doug Edert, KC Ndefo, Daryl Banks III and the rest of the bracket-busters who put the tiny commuter college in Jersey City, New Jersey, on the map.

Holloway's speech — perhaps the last one he will ever give at Saint Peter’s — was simple: Stay proud of how a team few outside campus had heard of until two weeks ago had shocked the basketball world.

“We've got guys that are going to be remembered for things that they could tell their kids and grandkids,” Holloway said.

What a story to tell. Just maybe skip the ending.

The Peacocks' joyous, bracket-busting, can-they-top-this ride through the NCAA Tournament ended with a dud in a 69-49 East Region final loss to North Carolina on Sunday.

Saint Peter's fans — large in numbers and loud again in Philly — rallied behind America’s new favorite team even as the score steamrolled out of control.

“You beat Kentucky! You beat Purdue! You can beat these guys, too,” one man yelled.

Not these Tar Heels.

The Peacocks, so proud and poised as they became the first No. 15 seed to reach the Elite Eight, were discombobulated from the opening tip. The Tar Heels opened on a 7-0 run and Holloway called a quick timeout to try and steady his team.

“I didn’t really recognize my team the first 10 minutes of the game,” Holloway said. “I thought we came out a little slow, a little timid.”

Banks — who two nights earlier scored the winning bucket against Purdue — failed to finish an easy alley-oop. Edert missed a long 3 in front of the Carolina bench.

Who were these guys?

The Peacocks, who snapped an NCAA-best 10-game winning streak, were done in by Carolina’s D — and even the rim. Banks was stuffed by the front of the rim on a monster dunk attempt. Armando Bacot came right down for the Tar Heels and used a thunderous, two-handed jam to show Saint Peter’s how it’s done.

The final minutes of the game might have been the final minutes of Holloway’s tenure at Saint Peter’s. Holloway is a leading candidate to succeed Kevin Willard as coach at Seton Hall, his alma mater. He deflected questions all tournament about his future. But even the 45-year-old Holloway, in his fourth season at the tiny Jesuit school that has an undergraduate enrollment of 2,134 students, surely must know he has maxed out the potential at Saint Peter’s. He again declined on Sunday to talk about his professional fate.

“I’m worried about those 15 young men whose heart is broken and really down,” he said. “It’s my job as their leader to cheer them up, make sure they understand what they did the last two weeks, and like I said we’re going to walk out of here the same way we walked in here, with our head up.”

In other words, as they say at Saint Pete's, #StrutUp.

But what Holloway and the Peacocks (21-12) accomplished in two weekends might be the lasting memory of this tournament, no matter which blueblood cuts down the net next week in New Orleans.

“What we did, we generated a lot of publicity to our school,” Banks said. “It's just going to help the school out in general. Caught the attention of everybody who wants to come here. I think just what we did will have an impact on everybody who knows about the school now, just going forward.”

Saint Peter's knocked off No. 2 seed Kentucky to start a run that launched the rocket toward endorsement deals, morning show spots and late-night TV wisecracks.

That win alone — down goes Coach Cal! — should have been enough to sustain the program for decades to come. But then came a win over seventh-seeded Murray State and a date in the Sweet 16. Up next, the big, bad, Big Ten Boilermakers. FanDuel Sportsbook had Purdue at a 12 1/2-point favorite to win the Sweet 16 matchup Friday in Philadelphia. The last thing Purdue saw as it trudged off the court was delirious Peacocks jumping on press row tables, making snowmen on the court and celebrating an improbable 67-64 victory.

About 93 miles up the New Jersey Turnpike, nearly 2,000 fans turned out at the Saint Peter's bandbox known as Run Baby Run Arena for a watch party. It was a scene impossible to image at the time when a little more than 400 fans attended the season opener, but easy to think this week it could last at least one more weekend and the school could dance with Duke.

The fan club grew as the wins piled up — all fun until the run was snuffed out by a team from Tobacco Road.

True story, Peacocks can fly. Just not all the way to the Final Four.