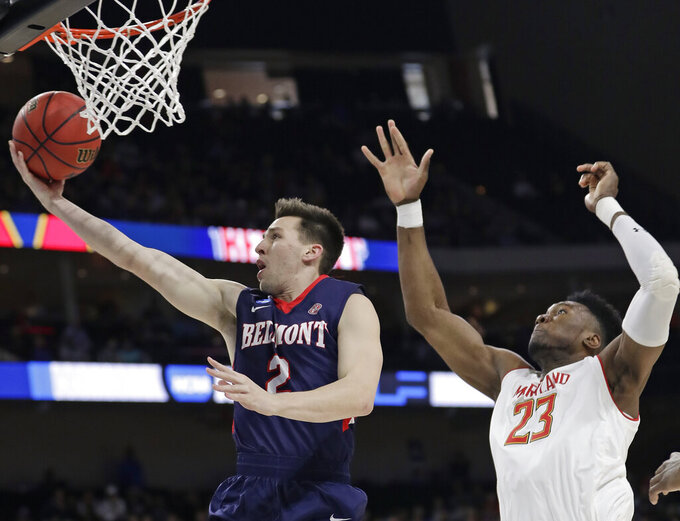 FILE - In this March 21, 2019, file photo, Belmont guard Grayson Murphy (2) gets off a shot ahead of Maryland 's Bruno Fernando (23) during the first half of a first-round men's college basketball game in the NCAA Tournament in Jacksonville, Fla. (AP Photo/John Raoux, File) 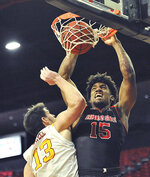 Marshall’s Taevion Kinsey believes he’s heading into his senior year as a better and more relaxed player after debating whether to turn pro during the offseason.

He also has come back as a bigger player.

Kinsey entered his name into NBA draft consideration before announcing prior to the draft that he would return to school. The 6-foot-5 guard now enters his senior season as one of the top college basketball players from outside the major conferences.

“I got some great feedback from guys in the NBA,” Kinsey said. “I’ve got a lot of NBA guys now – players and coaches – who reach out now and try to help me. That’s a big plus going into this year.”

Kinsey averaged 19.5 points and 6.2 rebounds last season to lead Marshall in both categories and earn first-team all-Conference USA honors. He bulked up in the offseason without losing the athleticism that has made him an intriguing pro prospect.

Kinsey also spent the offseason trying to improve his shooting. Kinsey says the 2020-21 season was a little stressful for him as he weighed his options.

Now that he’s tested the draft waters and has a greater understanding of how he must improve before he launches his pro career, Kinsey is feeling better.

“Me going through that process, I think it took a lot of weight off my shoulders for me to just play freely this year and not have to worry about things,” Kinsey said.

Kinsey is among the under-the-radar players who bear watching during the upcoming college basketball season. For the purposes of this list, we considered players from outside the six major conferences (the Power Five and Big East).

We also didn’t include players from No. 1 Gonzaga and No. 15 Houston, which didn’t exactly fit the under-the-radar profile after reaching the Final Four last season. The same goes for No. 12 Memphis, which brought in the nation’s No. 1 recruiting class.

This 6-footer averaged 24.5 points to lead all Division I players last season and thrived in the spotlight while helping Oral Roberts reach the Sweet 16. He averaged 26.7 points in three NCAA Tournament games and scored at least 25 points in each of them. He had over 40 points in two regular-season games last year. He shot 43% from 3-point range and 89% from the free-throw line.

Green was the Missouri Valley Conference’s player of the year in the 2019-20 season, but the 6-4 guard played just three games last year before getting knocked out by a hip injury. He averaged 22.3 points in the three games he did play. He had 19.7 points per game during the 2019-20 season.

Omier averaged 12.6 points and 12.3 rebounds as a freshman last season. The only other freshmen since the 1992-93 season to average at least 12 points and 12 rebounds were Kansas State’s Michael Beasley, Louisiana Tech’s Paul Millsap and Colgate’s Adonal Foyle. The 6-7 forward had 15 double-doubles.

Sherfield, who is 6-2, began his college career at Wichita State. He averaged 18.6 points, 6.1 assists and 1.6 steals last season in his first year with Nevada. Sherfield led the Mountain West Conference in assists and steals and ranked second in the league in scoring.