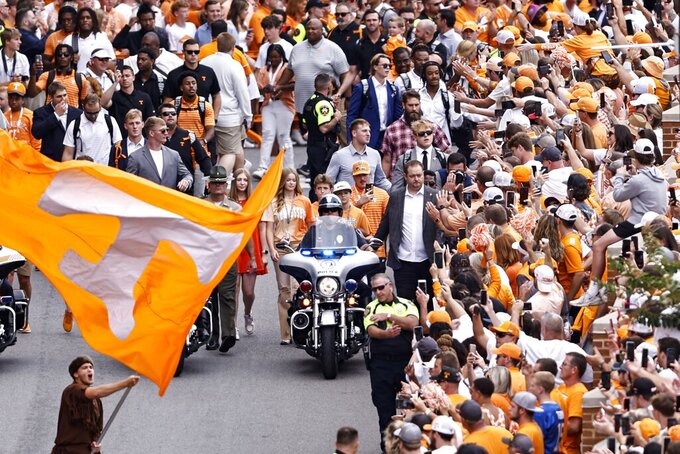 Neyland Stadium is selling out again and fans already are trying to plan how to paint a visiting stadium orange and white to cap Tennessee's regular season.

The true test of just how good these Volunteers might be this season starts Saturday at No. 25 LSU.

Then they host No. 1 Alabama. There's a final break from the usual Southeastern Conference juggernaut against UT Martin before hosting No. 13 Kentucky and then a trip to Athens to play defending national champ and No. 2 Georgia.

At a university where the men's basketball team won the SEC Tournament title in March, women's basketball reached their first Sweet 16 since 2016 and the baseball team spent much of the season ranked No. 1, it's about time the football program started pulling its weight around campus.

Heupel says success is breeding more success across the board.

“The passion of our fan base is obviously felt by our football program, but it is felt by everybody,” Heupel said. “There is a ton of excitement that surrounds Knoxville, the state of Tennessee and Vol Nation. ... When it’s going good, your logo is in front of everybody all year long, 365 days out of the year.”

Being ranked at all, let alone in the top 10, didn't seem possible in late January 2021. Heupel had just been hired shortly after the university chancellor announced she fired his predecessor and nine others over “shocking” recruiting violations. The Vols went 16-19 in Jeremy Pruitt's three seasons.

“The energy is different than when I first got here inside of the building,” Heupel said. "You can feel that, and it is because of the atmosphere that has been created across all sports.”

Tennessee is 10-6 since Heupel took over, and he is the first coach since the AP Top 25 started in 1936 to beat a top-20 team on the road in each of his first two seasons.

Helping Heupel get the Vols back on the track has been quarterback Hendon Hooker, a player Heupel persuaded to stick around after transferring from Virginia Tech. Hooker threw for 31 touchdowns with three interceptions and 2,945 yards last season.

Now Hooker is running the nation's top offense with 559.2 yards per game and the fourth-best scoring unit putting up 48.4 points a game. He is averaging 298.2 yards passing per game with eight TDs and no interceptions with three TD runs this season.

He threw for 349 yards and two TDs and ran for 112 yards more with another score in Tennessee's 38-33 victory over then-No. 20 Florida on Sept. 24, only the Vols' second win in that series in 18 years. Heupel says there's room for Hooker to grow more.

“Sometimes it looks easy because we are playing at a really high level,” Heupel said. "It is not easy, and he is just in so much command of what we are doing. He understands the why behind everything, and that is a big part of it.”

How big a leap Tennessee makes in Heupel's second season depends heavily on a defense that is giving up 407 yards per game. The Vols' scoring defense has been better, allowing just 19 points a game in a stat padded with two wins over Mid-American Conference teams.

Heupel said the Vols know what they need to do better, starting with tackling, assignments and simply knowing what they're supposed to do.

The Vols are coming off an open date, when they worked on those issues and healed ahead of the meat of their SEC slate.

“To see how it’s changed from when I first got here to what it is now is just crazy,” defensive lineman Omari Thomas said. "It’s something we want to just keep doing, honestly, and get better and better every week.”