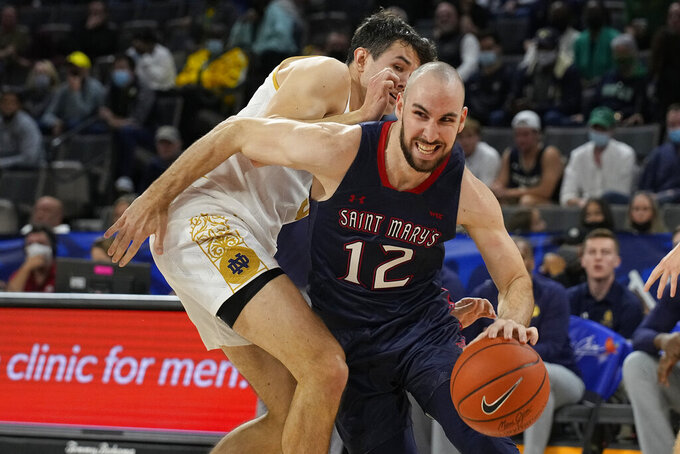 The Gaels (5-0) and Irish (2-1) each faced their first big tests of the season and neither gave an inch, trading the lead 16 times.

Saint Mary's went up two on Fotu's 3-pointer with 46 seconds left and was still up one after Cormac Ryan made 1 of 2 free throws.

Tommy Kuhse, who had 14 points and four assists, hit two free throws with 4 seconds left, giving the Irish a final shot to tie it. Notre Dame couldn't get a good look and Ryan missed a desperation 3-pointer at the buzzer.

The Gaels move on to face Oregon in Tuesday's semifinals.

Ryan led Notre Dame with 16 points and Paul Atkinson Jr. scored 11 of his 13 points in the second half.

The Gaels returned everyone from a team that labored through the pandemic-altered 2020-21 season, ending it with a trip to the NIT.

Notre Dame also has plenty of experience, returning a core group of seniors and adding key transfers, including Atkinson, the 2020 Ivy League player of the year at Yale.

The two veteran teams put on an offensive show early in the Maui-in-Vegas nightcap, trading 3-pointers and drives to the rim.

Saint Mary's went on the first run, scoring 10 straight points to go up 31-24. Notre Dame answered, holding the Gaels scoreless over the final 3:56 to tie the game at 31 by halftime.

The good shooting continued into the second half, neither team able to get much separation.

Atkinson was far more aggressive in the second half, attacking the rim instead of kicking it out, like he did in the first.

Fotu, who had 12 points in the first half, continued to give Saint Mary's a lift off the bench despite playing with foul trouble, including the big 3 in the final minute.