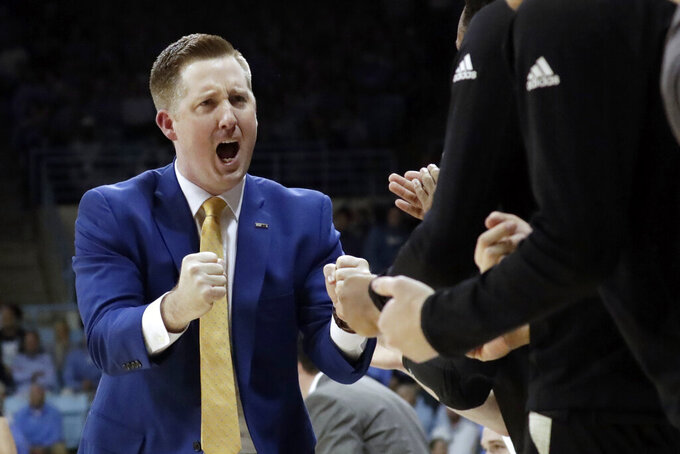 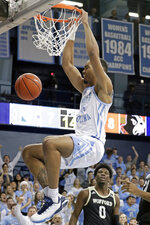 CHAPEL HILL, N.C. (AP) — The venue was different, but the result was the same.

Wofford traveled to Chapel Hill and shocked a ranked North Carolina team again, getting 19 points from Trevor Stumpe and riding a 16-0 run in the second half to a 68-64 win over the 17th-ranked Tar Heels on Sunday.

Storm Murphy added 15 points and Messiah Jones had 13 points for the Terriers (7-4), who won at North Carolina for the second time in three years.

“We know what comes with the intensity of this type of game,” Murphy said. “We 100 percent believed we could do it and we were going to win. It was a blast. It was absolutely a thrill.”

This one gave first-year coach Jay McAuley a signature win in the Tar Heels’ first regular-season game at Carmichael Arena since Jan. 4, 1986.

While the Terriers sprinted to midcourt to celebrate, the Tar Heels (6-4) walked away in a daze after their third straight loss.

North Carolina played without starters Cole Anthony (out indefinitely with an injured right knee) and Leaky Black (sprained right foot). The school said treatment plans are being evaluated for Anthony, the second-leading scorer among freshmen nationally, who is averaging 19.1 points.

Wofford, a 12-point underdog, made four 3-pointers during its decisive spurt, a 6-minute stretch in which the Tar Heels missed 10 consecutive shots.

The Terriers had just five turnovers and made 14 of 40 3-point attempts, outscoring North Carolina by 24 points from 3-point range.

“Fourteen 3s, that hurts us,” North Carolina coach Roy Williams said. “But 14 for 40, you can sometimes live with that, but not if you shoot 32% yourself in the second half.”

Garrison Brooks had 17 points and 12 rebounds for North Carolina, which led 36-32 at halftime.

Brandon Robinson added a career-high 16 points for the Tar Heels. They cut Wofford’s lead to 65-61 with 51.5 seconds remaining but got no closer.

Wofford: The Terriers took advantage of their opportunity to play North Carolina without Anthony, its best player and leading scorer. They scrapped inside against the taller Tar Heels and stretched out North Carolina’s defense on the perimeter for open 3-point shots.

“A lot of times, we handled some punches that North Carolina threw at us with some good, tough counterpunches,” McAuley said. “We fought our tails off. We weren’t the biggest, we weren’t the strongest, but we were really, really physical.”

North Carolina: The Tar Heels were struggling on offense when they had Anthony, albeit against some of the nation’s best defenses. They aren’t likely to be successful this season against anyone if they have to play long stretches without him. That became obvious in the second half, when they couldn’t generate offense without his ability to drive and draw defenders.

Williams said he found out on Saturday morning that Anthony would be unavailable to play, and he later received word that Black would be out. UNC also announced that forward Sterling Manley is out for the season after having surgery on his left knee on Dec. 12.

“We tried to practice Friday, and all of a sudden here are some things on Saturday,” Williams said. “But that’s an excuse. It still said North Carolina on our shirt. I didn’t do a good enough job to get us through.”

With the injuries to Anthony and Black, point guard K.J. Smith got his first start at North Carolina. Smith, who had played a total of 22 minutes in eight games this season, finished with seven points and four assists in 26 minutes.

His father, former All-American Kenny Smith, started for the Tar Heels in their previous regular season game at Carmichael nearly 34 years ago. The elder Smith had 12 points and 10 assists in a 90-79 win over N.C. State.

Murphy scored all 15 of his points in the first half, making five 3-pointers. … North Carolina forward Armando Bacot shot 2 of 14, with many of his misses coming from close range. … The Tar Heels converted 18 offensive rebounds into just 10 points.

Wofford: The Terriers play the second of four consecutive road games, staying on Tobacco Road to play at No. 7 Duke on Thursday.

North Carolina: The Tar Heels’ grueling stretch continues with a cross-country trip. They play at No. 6 Gonzaga on Wednesday night, their fifth game in the last six against an opponent currently ranked in the top 10.