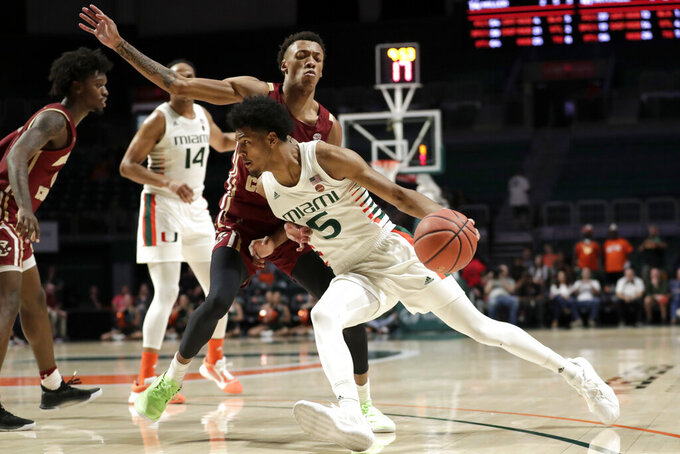 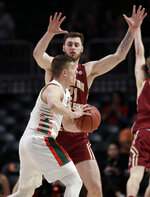 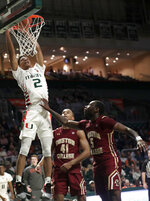 “My mentality is just play efficient and try to make the best plays possible for the team and try to get a win every possession,” Wong said.

The Hurricanes (12-12, 4-10 Atlantic Coast Conference) broke it open with a 24-2 run that began midway through the first half. Harlond Beverly scored seven points during the surge and Anthony Walker’s dunk with 3:55 remaining capped the spurt and gave Miami a 38-17 lead.

Chris Lykes finished with 16 points and Kameron McGusty scored 12 points for the Hurricanes, who had lost seven of their last eight. Rodney Miller was Miami’s fourth scorer in double figures with 11 points.

“The message after our last game was we have to rebound better, share the ball better, find the open man better,” Miami coach Jim Larranaga said. “It’s as good as 40 minutes that we’ve played all season long.”

Early in the season, Wong saw limited action. But injuries to guards Lykes and McGustry resulted in a substantial increase in minutes, such as his 30-minute outing against Boston College.

“This atmosphere in the ACC is crazy,” Wong said. “Getting used to it was hard to come into. In the games I kept getting (charging fouls) and it stressed me out sometimes. Luckily (my teammates) helped me through it and now on and through the season I am getting a lot better at making good decisions.”

Miami maintained a double-digit advantage following its first-half run as Boston College (12-13, 6-8) got no closer than 55-42 on Derryck Thornton’s 3-point play with 10:06 remaining in the second half.

“We just stopped competing for about four or five minutes against a team with that type of firepower,” Boston College coach Jim Christian said. “I’m very disappointed in our team but I want to give them credit. Sometimes we get too wrapped up in ourselves.”

The Eagles shot 1-of-11 from the field as Miami built its 21-point lead but closed the first half with unanswered points on Williams’ dunk and Nic Popovic’s two jumpers.

Boston College: A stretch of four of the next five games at Conte Forum will provide the Eagles an opportunity to improve on their home fortunes. Boston College is 7-7 at home, including 3-3 in the ACC.

Miami: Forward Sam Waardenburg’s undisclosed injury sustained in practice Tuesday sidelined him against Boston College and extended the Hurricanes’ string of games without their nine-player rotation. Miami last used its full complement of scholarship players in a 95-62 home loss to Duke on Jan. 4.

An injury to forward Sam Waardenburg in practice prompted Larranaga to start guards Wong, Lykes, McGusty and Dejan Vasiljevic against Boston College. Forward Keith Stone was the only interior player in the starting lineup. Despite a lack of post presence, the Hurricanes out-rebounded the Eagles 35-30 and matched them in points in the paint with 38.

“That group that started had never played a moment, a possession of basketball this year,” Larranaga said. “They normally go against each other in practice.”

Lykes, who missed four consecutive games because of a groin injury before returning with a 21-minute outing at Florida State Saturday, played 29 minutes against Boston College.

“I feel pretty good, glad to be out there playing with my teammates,” Lykes said. “It was rough watching from the bench.”

Miami: The Hurricanes conclude their two-game homestand against Wake Forest on Saturday.