After DWI stop, Banchero plays for No. 7 Duke in win 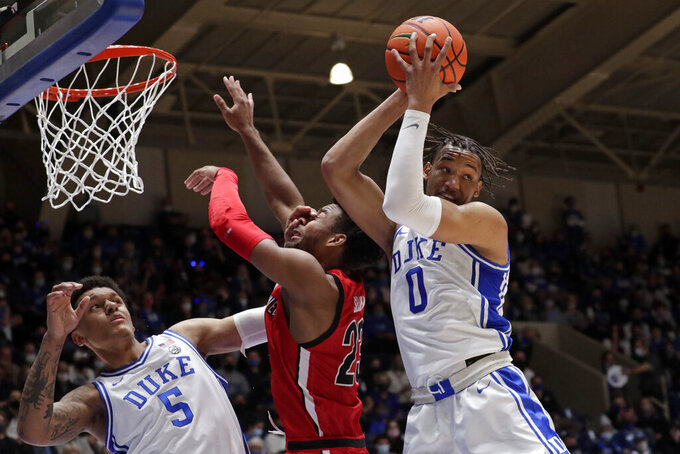 DURHAM, N.C. (AP) — Paolo Banchero started for Duke two days after he was cited for aiding and abetting impaired driving, finishing with 10 points and eight rebounds in the seventh-ranked Blue Devils' 92-52 win over Gardner-Webb on Tuesday night.

Banchero, a freshman who was picked as the Atlantic Coast Conference Preseason Player of the Year, was stopped by police early Sunday morning in nearby Hillsborough along with teammate Michael Savarino — coach Mike Krzyzewski’s grandson.

Savarino was driving Banchero’s white Jeep, according to court records, and was arrested for driving while impaired. Banchero, who was in the back seat, was cited at the scene and released.

“We had a violation of our standards and we’ll handle that internally. We’re already handling it,” Krzyzewski said.

Savarino did not play against Gardner-Webb (0-3), while Banchero was on the court for 26 minutes.

Of his decision to start Banchero, Krzyzewski said: “Two entirely different situations. Headlines might make it look like it’s the same, but it’s not. The decisions we made are in conjunction with my superiors, and we’re taking action.”

Trevor Keels led Duke (4-0) with 18 points, seven rebounds and four assists. Sophomore center Mark Williams had a career-high six blocks along with 13 points as Duke cruised to its largest margin of victory this season.

“It was a huge relief. It’s a lot of stuff going on outside that locker room,” Keels said. “But you know, we try to focus on just the game. And we did a good job preparing for the game. We took care of business.”

After trailing the Bulldogs by a point early on, Duke went on a 35-11 run to build a comfortable lead. The Blue Devils never trailed in the second half and led by as many as 42 points.

Gardner-Webb: After three straight road games to start the season — two against ranked teams — the Bulldogs will be happy to return home and test themselves against competition comparable to what they’ll see in the Big South this season.

“Tough night for the red team. I was super impressed with Duke. They were terrific tonight. We really had no answers, in terms of being able to put some stops together, and then we really struggled to score,” Gardner-Webb coach Tim Craft said. “I think we have a team that’s pretty connected. I think we got a group that’s pretty coachable.”

Duke: It’s unclear when — and if at all — Banchero might face discipline for the off-court incident. What is clear is when Banchero is on the court, Duke remains very difficult to beat.

“P is a good dude,” Keels said. “He knew we had a game today. He didn’t let that outside noise distract him too much.”

Duke had its best 3-point shooting game of the season, making 10 of 22 attempts (45.5%). The Blue Devils made one 3-pointer in their season opener against Kentucky. Duke was 110th in the nation, and eighth-best in the ACC, in 3-point shooting last season at 35.2%.

Duke moved up two spots in the latest AP Top 25 poll and should stay in the top 10 with additional commanding wins.

Gardner-Webb: The Bulldogs host Carver College of the NCCAA on Saturday.

Duke: The Blue Devils play their fourth of five straight home games on Thursday, against Lafayette.