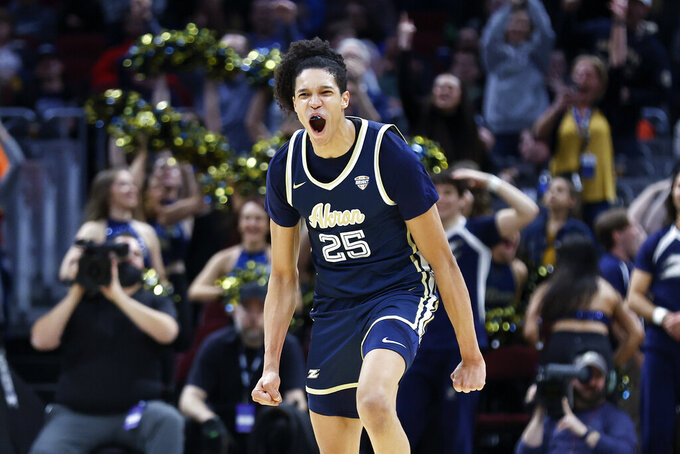 Akron's Enrique Freeman celebrates after a dunk against Kent State during the second half of an NCAA college basketball game for the championship of the Mid-American Conference men's tournament Saturday, March 12, 2022, in Cleveland. (AP Photo/Ron Schwane) 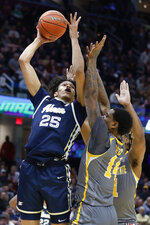 CLEVELAND (AP) — The only video that truly mattered to Akron's players was the one of them cutting down the nets.

Enrique Freeman scored 23 points and Akron shut down Mid-American Conference player of the year Sincere Carry while defeating bitter rival Kent State 75-55 on Saturday night in the MAC championship to earn its first NCAA bid since 2013.

The fourth-seeded Zips (24-9), who upset top-seeded Toledo in the semifinals, also ended Kent State's 14-game winning streak on a day that began with four Golden Flashes players being disciplined for a profane video.

Late Friday, Kent State forward DJ Johnson shot a video on his phone in the team's locker room while shouting a profanity directed at Akron. The league, with cooperation from Kent State, responded by suspending Johnson indefinitely and making three others, one of them starting guard Malique Jacobs, sit out the first half of the title game.

Freeman insisted the Zips weren't motivated by the video, but it would be hard to imagine it not inspiring them.

“We didn’t focus on any of that,” Freeman said. "I think we were off social media for the last 24 hours.”

Akron coach John Groce laughed at the comment and then chimed in.

“Their coach is a stickler," he said.

Freeman went 8 of 10 from the field, added eight rebounds and was named the tournament's MVP in his hometown. Xavier Castaneda and Ali Ali scored 15 points apiece for Akron, which has never won an NCAA Tournament game in four previous visits but just might have the makings of a team that won't be an easy out.

Senior Justyn Hamilton scored 19 to lead Kent State (23-10), which played short-handed due to the discipline dished out by the MAC in the wake of the video recorded after Friday's win over Ohio.

“There was clearly a lapse in judgment by one of our players,” Golden Flashes coach Rob Senderoff said when asked if he felt disrespected by his team. “It's hard to not look at it that way.”

Hounded all night be the Zips, Carry had his worst game this season, scoring just six points — 12 below his average — and committing nine turnovers. He was just 2 of 11 from the field and some of his misses were way off.

“Just a rough night for me,” Carry said. “Simple as that.”

Hours before tip-off, the league ruled Jacobs would have to sit out the first half, and Groce acknowledged his absence affected Akron's strategy. However, he downplayed the impact the video had on his team.

“We were aware of it, but to be honest with you, it has nothing to do with playing the games," he said. "Even at the end when the crowd started and the hoopla, I said, 'the game’s not over. We’ve been taking this thing one possession at a time for three days, why would we change now?’”

Jacobs finished with seven points in his 20 minutes.

“It was real hard just to sit there in the first half and watch,” said the redshirt junior, who had 19 points and 10 rebounds in the semis. “I'm the engine of the team and it was like a car without the engine. It was real, real hard."

The Kent State and Akron campuses are separated by just 10 miles, and the animosity between the school's respective fan bases has no limits. They each booed the other's dance team during timeouts while alternating chants of “Let's Go Kent,” with “Let's Go Zips.”

Trailing by nine at halftime, Kent State got Jacobs back to begin the second half and immediately went on an 8-0 run. But the Zips recovered with three 3-pointers, two by Garvin Clarke, to get back up by 10.

Akron later went on an 11-0 spurt, triggered by Ali's 3-pointer to take a 56-39 lead with 7:53 remaining. The closing minutes were an Akron party inside Rocket Mortgage FieldHouse as the Zips extended their lead.

After the final buzzer, Akron's players celebrated in a pileup at mid-court and didn't join their coaches in the handshake line with Kent State.

With so much on the line, every possession took on added importance and Kent State's offensive sloppiness in the first half — along with Akron's active defense — allowed the Zips to open 34-25 halftime lead.

The Golden Flashes had 11 turnovers, seven by Carry, who was trying to do too much to compensate for Jacobs being on the bench. He also went just 1 of 7 from the field and left the floor noticeably frustrated by a no-call on his last-second heave.

“We just didn't execute tonight,” Carry said. “We weren't on the same page with the play calls. It happens.”