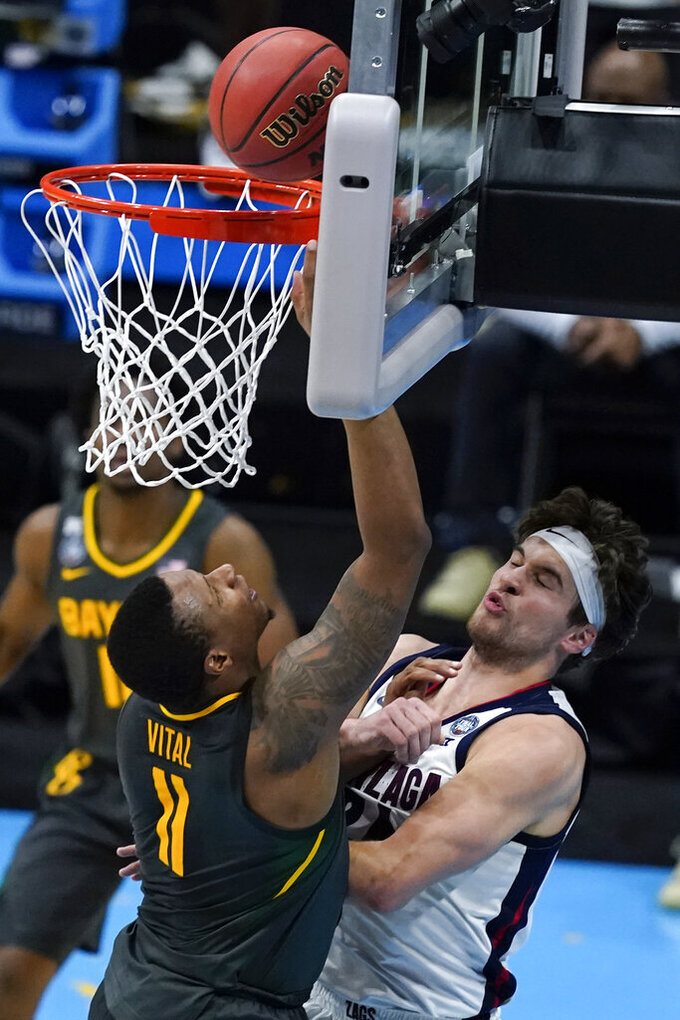 You could have turned off the national championship after about three minutes and had a good idea how the game went.

On Baylor's first possession, Mark Vital missed a shot, got his own rebound, missed again, got his own rebound again — and eventually Davion Mitchell made a jumper. The next time the Bears had the ball, Vital got another offensive rebound, which led to another basket. Then Gonzaga's Jalen Suggs turned the ball over with a charging foul, and Mitchell made a 3-pointer.

If you looked at Baylor's statistical profile, there were three factors in particular that stood out as elite — 3-point shooting, offensive rebounding and the ability to force turnovers. All of that was on display from the very beginning Monday night, and Gonzaga simply looked overwhelmed.

At the beginning of this tournament, there were some questions — Oops! — about Baylor's ability to impose its will defensively. Even after the win over Gonzaga, the Bears ended up 22nd in the nation in adjusted defensive efficiency, according to kenpom.com. That's good but not great.

But one thing the Bears absolutely did do well on defense was force turnovers. Their defense finished the season ranked No. 4 in turnover percentage. If they could force enough turnovers in the title game, they could avoid becoming the latest team to be carved up by Gonzaga's excellent offense.

They forced 14 while committing only nine.

That was just part of the story. Gonzaga actually shot 51% from the field while Baylor shot 45% — yet the Bears won by 16 in a game that was never all that close. Baylor finished with 67 field goal attempts to 49 for Gonzaga, which helped offset that disadvantage in shooting accuracy.

Baylor finished with 16 offensive rebounds. Gonzaga had only 17 defensive rebounds. Essentially, when the Bears missed a shot, they had about a 50-50 chance of getting the ball back anyway.

Finally, the 3-point line worked in Baylor's favor. That wasn't a surprise, but it wasn't necessarily a given.

The 3-point revolution in basketball is based on the idea that if a player shoots 40% from 3-point range, that's the equivalent of shooting 60% on 2-pointers. Gonzaga turned that notion on its head a bit this season by shooting better than 60% on 2s fairly often. The Bulldogs were the nation's top team in 2-point shooting percentage — that included a 71% showing against UCLA in the semifinals and 76% against Creighton in the Sweet 16.

Even on this disappointing night, Gonzaga shot 62.5% inside the arc. But because of all the extra attempts, Baylor made just as many 2-point baskets (20) as the Bulldogs. And when it came to 3s, it wasn't much of a contest.

Baylor finished the season as the nation's top team in 3-point shooting percentage. The Bears shot 10 of 23 beyond the arc in the title game, while Gonzaga went 5 of 17 — a bit of an off night. Given everything else that was going wrong, the Bulldogs didn't need that.

There were times when Gonzaga showed how it reached this point. The Bulldogs outscored Baylor 40-30 in the paint and certainly created their share of easy baskets. But Gonzaga's advantage inside the arc felt inconsequential when the Bears were making more 3s, forcing more turnovers and dominating the boards.

Baylor won the title by showing off all of its biggest strengths — and Gonzaga couldn't do much to prevent it.