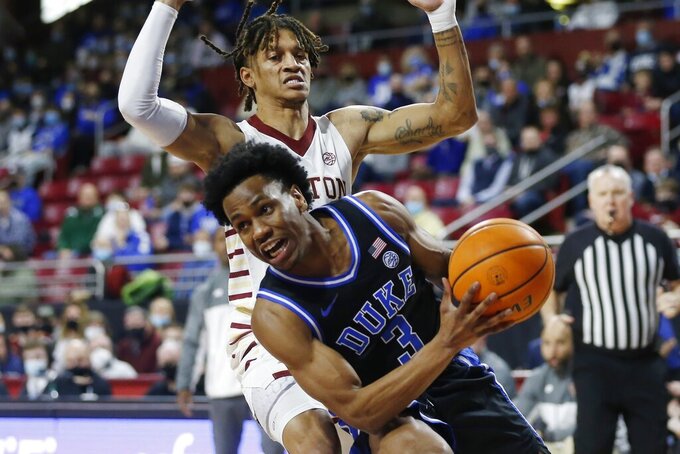 BOSTON (AP) — A big second half capped off a very busy week with a victory for No. 7 Duke.

Paolo Banchero had 16 points and 14 rebounds as Duke pulled away midway into the second half for a 72-61 victory over Boston College on Saturday.

Playing their fourth game in eight days — with a last-second loss at home against Virginia on Monday — the Blue Devils flexed their strength inside and had some timely 3-pointers by Wendell Moore Jr.

“That's a real quick turnaround for us,” Duke coach Mike Krzyzewski said after his team arrived in Boston at 3:30 a.m. on Friday. “We knew that they would be ready and there would be a big crowd. ... We knew we'd have a tough time and we did."

James Karnik led BC (9-14, 4-9) with 21 points and nine boards, DeMarr Langford finished with 16 points and Makai Ashton-Langford had 10 points and seven rebounds.

With former Duke star Jayson Tatum of the Boston Celtics sitting behind the Blue Devils’ bench, and Celtics president Brad Stevens seated across courtside in a sold-out Conte Forum, the Eagles surprisingly kept it a two-possession game for most of the opening half.

Duke opened its first double-digit lead of the game early in the second half and pushed it to 51-36 when Moore nailed a 3-pointer in front of his team’s bench and Tatum, who also wore 0 in his one season with the Blue Devils.

BC continually tried to get the ball inside.

“We wanted to play paint ball,” Eagles coach Earl Grant said. “We knew traditionally when you played against Duke in the past, they’re going deny on the perimeter and they’re going to pressure the ball, so it’s hard to pressure and deny and keep somebody out of the paint. ... I thought we did a good job executing that.”

With BC football coach Jeff Hafley helping cheer on from the student section behind a basket in front of Duke's bench, the Eagles had sliced their deficit to seven, but the Blue Devils went on an 11-0 spree and opened their lead to 62-44 with just under eight minutes left. Moore also had a 3 during that run.

Moore took a hard fall and left Thursday's win at Clemson after a flagrant foul by David Collins.

“He's been in hot tubs and cold tubs," Krzyzewski said.

The Blue Devils pushed their lead over 20 points with just under four minutes left.

Banchero was just too much for BC to handle.

“When we needed him most, he came through,” Moore said. “He just made strong drives every time. He might not score every time, but he made the right play.”

Duke: Sitting atop the ACC, the Blue Devils are aiming for a No. 1 seed in the NCAA Tournament if they finish the regular season strong.

Boston College: In Grant’s first year, the Eagles just don’t have the talent to match up offensively with elite teams like Duke, but they play solid defense — a staple of Grant’s coaching years at College of Charleston — so they seem to keep most games respectable.

Duke fans, clad in their blue and white, lined most of the lower bowl an hour before tip-off, watching the Blue Devils warm up.

They broke into chants of “Let’s Go, Duke!” when the Blue Devils took charge midway into the second half.

Despite the loss against Virginia, the Blue Devils should stay near where they are or could move up a spot or two with No. 4 Purdue getting blown out by Michigan this week and sixth-ranked Houston falling to Memphis by double digits.

The game was officiated by just two referees because Jerry Heater was out with a non-COVID-19 illness.