Barrie, Grubauer help Avs hold on for 4-3 win over Knights 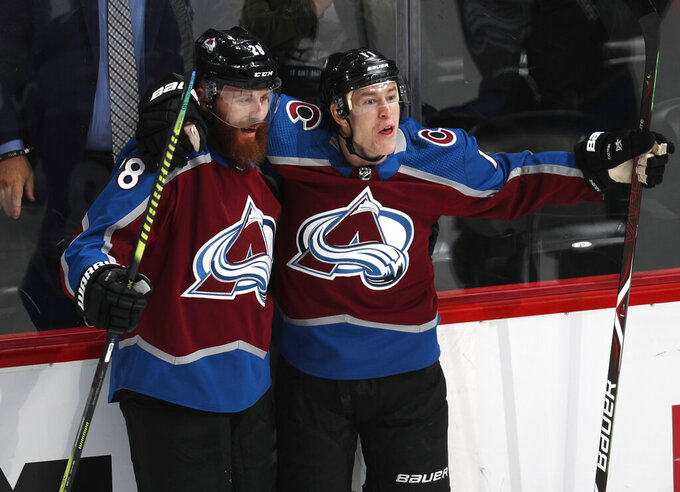 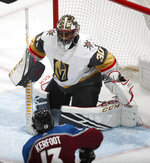 DENVER (AP) — Tyson Barrie scored in the second period to become Colorado's career goals leader among defensemen, Philipp Grubauer kept up his solid play with a 34-save performance and the playoff-chasing Avalanche beat the Vegas Golden Knights 4-3 on Wednesday night.

Matt Calvert, Nathan MacKinnon and Gabriel Bourque also scored to help the Avalanche stay two points in front of Arizona for the last wild-card spot in the Western Conference with five games left. Colorado hosts the Coyotes in a pivotal matchup Friday.

Barrie's 73rd career goal moved him out of a tie with Sandis Ozolinsh for most among Avalanche defenders. Barrie also had two assists.

Grubauer has taken over in goal for Semyon Varlamov and the Avalanche have taken off. They're 5-0-1 over Grubauer's last six starts.

Paul Stastny, Reilly Smith and Alex Tuch scored for a Vegas team that was denied a chance to clinch a playoff spot. Goaltender Malcolm Subban stopped 26 shots in his sixth consecutive start.

Tuch made it a 4-3 game with 3:23 left when he knocked in a puck out of the air. Vegas pulled Subban with just over a minute left and had several chances, only to be denied by Grubauer. With 7.6 seconds remaining, MacKinnon was called for holding the stick and the Golden Knights had a 6-on-4 opportunity. Jonathan Marchessault had a chance in the waning seconds, but sent his shot just wide of the net.

Trailing 3-0 midway through the second, the Golden Knights got goals from Stastny and Smith to climb back into the game. Bourque extended the lead to 4-2 with his second goal of the season from the right circle with 2:50 remaining in the period.

That was just enough of a cushion for Grubauer, who was named the NHL's third star of the week Monday after stopping 149 of 155 shots.

Colorado scored first in a seventh straight game when Calvert took a pass from Tyson Jost and lined a wrist shot past Subban 5:39 into the game. It was Calvert's first goal since Feb. 20.

MacKinnon added another nearly three minutes later when he spun past a defenseman on the power play and beat a screened Subban. That was goal No. 38 for MacKinnon this season.

Gradually, the Avalanche are returning to health. Matt Nieto was back in the lineup after missing 15 games with a lower-body injury. The team is still without two of their top scorers in Mikko Rantanen and captain Gabriel Landeskog as they both deal with upper-body ailments.

Landeskog participated Wednesday in the morning practice wearing a red non-contact jersey. There remains no update on Rantanen.

Avalanche: Close out a two-game homestand with a game Friday against Arizona.