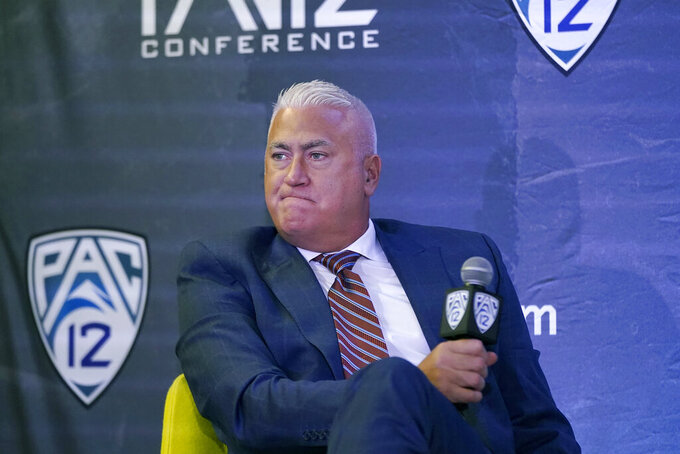 They were the surprise of the Pac-12 last season. Now the Oregon State Beavers must live up to heightened expectations.

That's quite a leap from last season, when Oregon State was picked to finish dead last.

The Beavers went 20-13 (10-10 in the Pac-12) before winning the Pac-12 tournament for the first time — rolling through UCLA, Oregon and Colorado in the process.

But they didn't stop there. Making the NCAA Tournament as the No. 12 seed, Oregon State defeated No. 5 Tennessee and No. 4 Oklahoma State — the team's first tournament wins since 1982 — before downing Loyola-Chicago to advance to the Elite Eight. The run ended with a loss to Houston.

The Beavers are hoping to build on that success this season.

“With the run we had and people talking about what we did this past season, you can’t be satisfied, you can’t just sit and be happy with last year. Obviously, it was a great year but here we are a month away from a new season. So we got to go out there with that mindset," said guard Jarod Lucas.

Wayne Tinkle, heading into his eighth season as head coach, said the Beavers' motto this season is “new year, new team." He cautions that rebuilding chemistry will take time.

“It’s always a process. You know sometimes unfortunately it might take some tough losses. You can try to do it with drills and having events for team bonding and chemistry building and all that. But really it needs to be carried out throughout the season, learning some tough lessons,” Tinkle said. “We’ve got an odd mix, seven returners, six of which had pretty significant roles. And then six or seven newcomers. And so you’ve got to have balance.”

One of the key losses from the team that excelled last season is guard Ethan Thompson, who averaged 15.7 points a game. Also moving on was guard Zach Reichle, who decided against taking an extra year of eligibility and was pursuing a master's degree.

“Ethan was great. He did so many things well, he worked on his weaknesses. Over time, he became a really good defender as well as a facilitator. Zack was more of the leader, the everyday glue guy," Tinkle said. "So, it’s asking a lot to replace those guys but that’s happened every year. You wonder, 'Gosh, what are we gonna do without this guy?’ It’s a challenge to our vets to take on that responsibility.”

Thompson played in the NBA Summer League for the Chicago Bulls but was waived before the start of this season.

The Beavers' 2020-21 season really came together late, when the team won three straight games on the road against Cal, Stanford and Utah.

Oregon State pulled out a 59-57 victory against Cal, the team's first win in Berkeley since 2009. But the team got caught up in the emotions.

Afterward, the coaches got on the players for an uncharacteristic performance, and wondered how they would respond the next day in practice. Tinkle put on some old-school music and the team simply shot the ball around.

“It was a relaxed deal but they came focused, and then we squashed any of that nonsense. We were lucky enough to get the win at Stanford, and that sort of springboarded things, I think,” Tinkle said.

LOOKING AT THE SCHEDULE

Oregon State opens the season on Nov. 9 at home against Portland State. The Beavers also play Iowa State and Tulsa on the road before taking part in the Emerald Coast Classic in Florida.