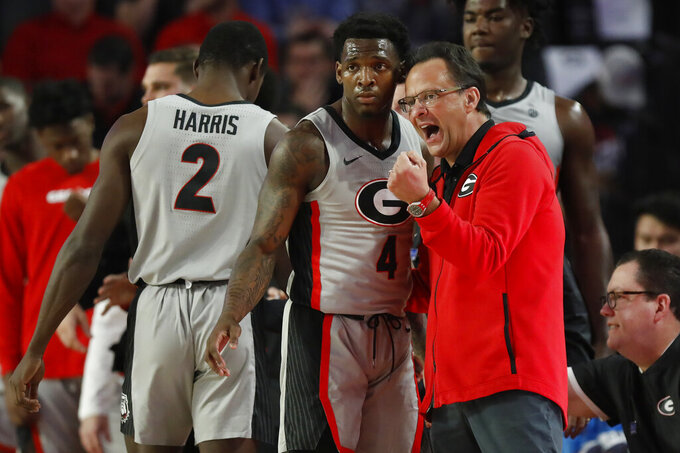 ATHENS, Ga. (AP) — Just as Tom Crean hoped, Anthony Edwards has made an immediate impact at Georgia, leading the nation's freshmen in scoring and fulfilling his hype as a player on a fast track to the NBA.

The remainder of Crean's plan for his second season as Georgia's coach hasn't followed form. The Bulldogs, who play at Missouri on Tuesday night, have lost three straight games to fall close to the bottom of the Southeastern Conference standings.

Georgia (11-8, 1-5 SEC) needs a dramatic turnaround to preserve hopes of making its first NCAA Tournament appearance since 2015. Crean says there is time to save the season.

“It's early in the season,” Crean said Monday, adding the team's mental state is still strong.

“It's a long season,” he said. “Our whole thing is about improvement and how do we get better and what do we do next. Stay focused on that.”

The losing streak includes Saturday's 70-60 home loss to Mississippi, which came to Athens without a win in SEC play. That loss may be remembered with regret in March when the Bulldogs' postseason credentials are under review.

Crean has enjoyed strong fan support. Georgia had a sellout against Ole Miss and already has announced a sellout for Saturday's game against Texas A&M.

The second-year coach needs a turnaround to reward the fans.

Georgia finished 11-16 in Crean's first season, including a 2-16 mark in the SEC. That leaves the former Indiana and Marquette coach with a dismal 3-21 record in conference games.

The recruiting class led by Edwards was expected to make Georgia more competitive in the league.

Edwards is averaging 18.6 points per game, but he shares some blame for Georgia's offensive woes. The 6-foot-5 guard launched 12 shots in the loss to Ole Miss, including 10 3-pointers, while scoring 13 points. That's an unhealthy ratio of long-range shots.

“That's not the game plan,” Crean said after the loss to Ole Miss when asked about Edwards' shot selection. “He's got to get to the rim more. We've got to continue to move him around more.”

Edwards and Rayshaun Hammonds combined to make only 4 of 20 shots from the field against the Rebels. Even though missed layups were part of the problem, the loss affirmed Crean's belief that the Bulldogs must take better shots.

Edwards defended his tendency to rely heavily on 3-pointers, noting that “a couple of them were at the end of the buzzer.”

The problem, he said, was "I was just not making them.”

It's not a new problem. Edwards has made only 31.3% of his 3s this season. More drives to the basket could boost his 40.6% shooting on all shots from the field.

Edwards is an obvious target for defenses.

“Teams are trying to defend me differently,” he said. “They are trying to take me out of the game and make other people score. I just got to find ways to help my team win.”

Crean wants his players to avoid settling for jump shots against Missouri (9-10, 1-5).

“We've got to, especially in the first half, control more of the offense,” Crean said. “We just can't deviate. We've got too many guys right now that they predetermine a play rather than let that play happen. So we've got to get that movement. We've got to move without the ball. We've got to be better in those areas.”