Even with Livers injured, Michigan earns No. 1 seed in East 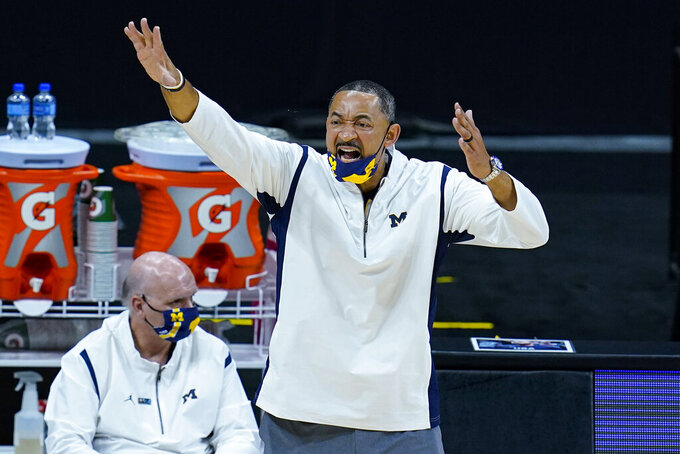 Michigan head coach Juwan Howard questions a call in the second half of an NCAA college basketball game against Maryland at the Big Ten Conference tournament in Indianapolis, Friday, March 12, 2021. Howard was later ejected from the game. (AP Photo/Michael Conroy)

Michigan’s bittersweet weekend continued Sunday as it earned a No. 1 seed in the East Regional a day after announcing its second-leading scorer has an injury that could keep him out of the NCAA Tournament.

Isaiah Livers is out indefinitely with a stress injury in his right foot that prevented him from playing in a Big Ten Tournament semifinal loss to Ohio State. Livers said Saturday that “I don’t want people to write me off yet” but spoke Sunday night about how he could contribute without playing.

“I’m just going to be the best leader I can be,” Livers said. “Obviously the mental aspect is going to be challenging for me, looking at my teammates giving their all out there and I know how much work they put in, and I can’t be out there.”

Michigan (20-4) opens its tournament run Saturday against the winner of Thursday’s matchup between Mount St. Mary’s (12-10) and Texas Southern (16-8).

“With everything we’ve dealt with, our guys have really competed so hard, they deserve to be in this position right now,” Michigan coach Juwan Howard said. “Now the real work starts.”

Alabama’s No. 2 seed is its highest since 2002, when the Crimson Tide also were seeded second but lost to Kent State in the round of 32.

Although Alabama hasn’t advanced beyond the first weekend of the NCAA Tournament since reaching a regional final in 2004, the Tide won the Southeastern Conference’s regular-season and tournament titles this year.

"I have full faith that we can take this thing, take the NCAA Tournament by storm, win the whole thing,” Alabama guard Jahvon Quinerly said after the Tide’s 80-79 victory over LSU in the SEC Tournament final.

The regional has a First Four matchup that looks more like a Final Four pairing based on the pedigrees of the programs. UCLA forward Cody Riley called it “kind of like a revenge game” because Michigan State beat the Bruins 75-62 in last season’s Maui Invitational.

Alabama is the first SEC team to win the league’s football championship game and its men’s basketball tournament in the same year since Florida did it during the 2006-07 school year.

Florida won the national titles in both football and men’s basketball that year. Alabama is already halfway there after winning the most recent College Football Playoff championship.

Rick Pitino is back in the NCAA Tournament with his fifth different school after leading Iona to a Metro Atlantic Athletic Conference Tournament title. Pitino coached Kentucky and Louisville to national titles, reached a Final Four with Providence and made an NCAA Tournament with Boston University.

The only other coaches to take five different schools to the NCAA Tournament are Lon Kruger (Kansas State, Florida, UNLV, Illinois and Oklahoma) and Tubby Smith (Tulsa, Georgia, Kentucky, Minnesota and Texas Tech).

Facing a second-seeded Alabama team should have Pitino feeling nostalgic.

Georgetown is one of the most surprising teams in the field. The Hoyas were below .500 during the regular season but earned the Big East’s automatic NCAA bid by storming through the conference’s tournament as the No. 8 seed and trouncing Creighton 73-48 in the final.

RETURN OF THE HUSKIES

UConn has won four national titles since 1999, but this marks the Huskies’ first NCAA Tournament appearance since 2016.

The Huskies are facing a relatively familiar opponent in the first round. Maryland beat UConn in a 2002 regional final during its run to the national championship. UConn defeated Maryland in the 1995 NCAA Tournament.