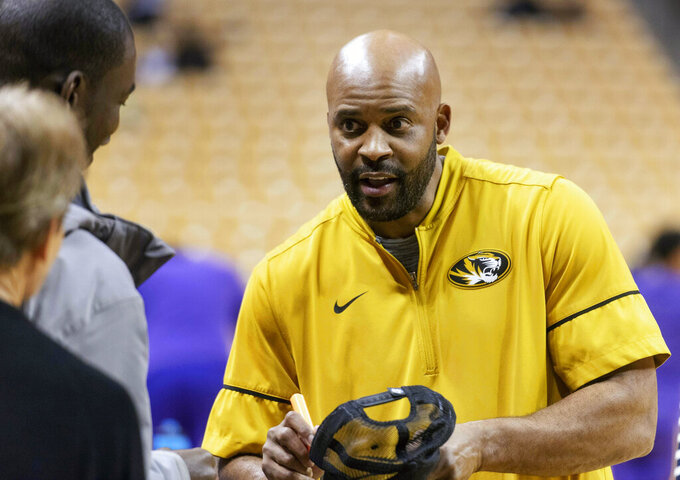 FILE - In this Jan. 26, 2019 file photo Missouri head coach Cuonzo Martin signs autographs for fans before an NCAA college basketball game against LSU in Columbia, Mo. Martin returns to Thompson-Boling Arena as a visiting coach for the first time Tuesday, Feb. 5, 2019 when his Missouri team faces the top-ranked Volunteers. Martin, who coached Tennessee from 2011-14 but never won over the fan base, now must try to snap the Vols’ school-record 16-game winning streak. (AP Photo/L.G. Patterson, file)

KNOXVILLE, Tenn. (AP) — Missouri's Cuonzo Martin is downplaying his return to Tennessee as a visiting coach for the first time since the end of his own tenure coaching the Volunteers.

"For me, it's just the task at hand, preparing to win a basketball game," Martin said. "I don't see it any other way really."

That matter-of-fact approach has helped Martin earn respect from rival coaches, though he never completely won over Tennessee's fan base.

Martin went 63-41 at Tennessee from 2011-14 after replacing Bruce Pearl, who led the Vols to NCAA Tournament bids in each of his six seasons on the job before getting fired amid an NCAA investigation that landed the program on probation. Martin left for California after three seasons.

Although Martin has coached against Tennessee twice since taking over Missouri's program in 2017, both games were in Columbia. Missouri beat Tennessee 59-55 last season and lost to the Vols 87-63 on Jan. 8.

Tennessee coach Rick Barnes says Missouri's teams take on the blue-collar personality of Martin, who played at Purdue from 1991-95 and survived non-Hodgkin lymphoma after being diagnosed during his pro career.

"He was a hard, tough-nosed guy, the kind of guy that you knew if you weren't ready to play, he was going to come after you," Barnes said. "I think his teams are like that."

Barnes called Martin "one of the finest people I've been around" and recounted a brief conversation the two coaches once had at a Georgia hotel. Barnes said he had just taken the Tennessee job when Martin said that "you're going to love it" there. Martin says he has no recollection of that meeting.

Martin's own Tennessee tenure was somewhat bittersweet. He led Tennessee to three straight NCAA Tournament victories and a regional semifinal berth in his last season with the Vols, yet he never was as beloved as his popular predecessor.

When Tennessee was struggling to earn an NCAA bid in Martin's final season, disgruntled fans launched an online petition seeking the return of Pearl, who was about to come back to coaching after a three-year show-cause penalty. Pearl eventually revived his career at Auburn.

Martin instead left on his own, turning down a raise and extension. Barnes questioned Monday whether Martin was "treated here the way he really should have been treated."

The Missouri coach showed no hard feelings as he reflected on his Tennessee tenure during Monday's Southeastern Conference coaches teleconference.

"I learned a lot as a coach in three years," Martin said. "It was a tremendous experience."

Martin's return offers a reminder of how Barnes has stabilized Tennessee's program and taken it to new heights.

Barnes was Tennessee's third coach in as many seasons when he arrived. Donnie Tyndall replaced Martin but lasted just one season before he was fired as the NCAA investigated Tyndall's Southern Mississippi coaching tenure.

Tennessee went a combined 31-35 in Barnes' first two seasons but won a share of the SEC regular-season title last year and now has its second No. 1 ranking in school history. Tennessee has sold out five home games this season after recording a total of four sellouts in four seasons under Martin and Tyndall.

In the meantime, Martin has hit a roadblock at Missouri this year after a standout debut season.

Missouri went 20-13 and reached the NCAA Tournament under Martin last year after posting a combined 27-68 record the three seasons before his arrival. This year, Missouri has struggled to meet expectations following a preseason knee injury that knocked Jontay Porter out for the entire year.

Barnes has confidence in what Martin is building. Barnes paid quite a compliment Monday by saying that if his son had played college basketball, he'd have wanted him to play for someone like Martin.

"He's that kind of person you'd want your son to be around," Barnes said.