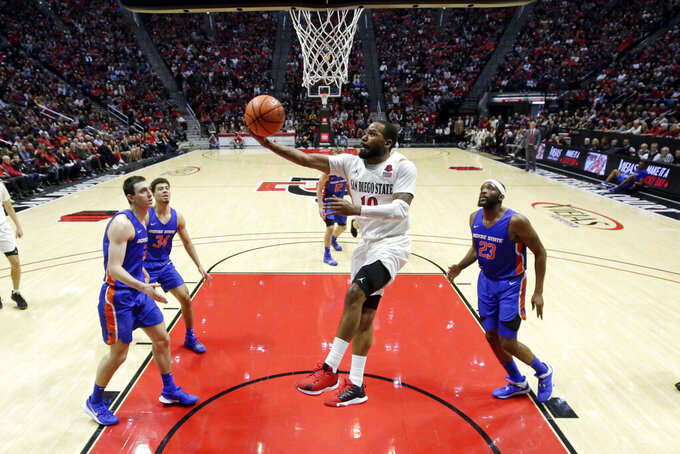 SAN DIEGO (AP) — With Viejas Arena rocking like it did during Kawhi Leonard's short stay at San Diego State, KJ Feagin and the No. 7 Aztecs knocked out Boise State in the opening minutes.

Feagin made three 3-pointers in the first seven minutes and Malachi Flynn added two, helping the Aztecs race to a 14-point lead. They never let up, beating the Broncos 83-65 on Saturday night to remain undefeated and continue chasing school history.

Feagin scored 16 of his season-high 23 points in the first half, Yanni Wetzell added 20 and Flynn had 19 for the Aztecs (17-0, 6-0 Mountain West). San Diego State and Auburn remain the nation's only undefeated teams.

“From the first jumper I knew that it was going to be one of those breakout games," said Feagin, a graduate transfer from Santa Clara. “I'm just happy to get out of that slump I was in, so now it's about stringing some good games along and not letting it be just one out of the few games that I play well."

Feagin made four 3-pointers to help SDSU to a 48-25 halftime lead.

SDSU continued its hottest start since 2010-11, when it opened 20-0 behind Leonard and reached the Sweet 16 for the first time before finishing a school-record 34-3.

The Aztecs gave the sellout crowd plenty to cheer about. After they took a 23-9 lead, BSU pulled within eight points on Williams’ slam dunk, but the Aztecs answered with an 18-2 run to blow it open.

Feagin matched his season high of 13 with more than 6 1/2 minutes left in the first half. His previous season high was against Grand Canyon on Nov. 13.

“We got off to a fantastic start," Dutcher said. “We just rode that wave of momentum. We built a nice first-half lead and then we held on the second half. Boise is a very good team. As a coach, you're 17-0 but I want to find something to be mad about once in a while and they shot 60% the second half against us so I wasn't very happy about that. But they're a very good team and we were very fortunate to have the cushion we had in the first half that we could withstand a couple runs that they made on us."

BSU tied its season-high with 18 turnovers.

“They just blitzkrieged us," Boise State coach Leon Rice said. “We tried to help on the post a little bit and whack, whack, whack, three 3s. It all starts with Malachi, though. He just gets going downhill and he’s so shifty and so smart with the ball, he’s a handful. He’s the straw that stirs that drink, and those guys are good shooters on the wings. He just peppered the ball and we couldn’t keep up with it all night long, especially the first half.

“Give credit to San Diego State," Rice added. “They’re undefeated for a reason. They’ve done this to some good teams. We knew they were good. You have to play an A-plus game on the road in the Mountain West.”

Boise State: The Broncos had beaten the Aztecs two of their four visits to Viejas Arena. They never had a lead Saturday. “It was some people's first time playing here so it's kind of hard to do," Williams said. “We've just got to learn from it and get better."

San Diego State: The Aztecs remain without Nathan Mensah, who missed his fourth straight game with a respiratory ailment. The Aztecs did get Aguek Arop back from a shoulder injury.