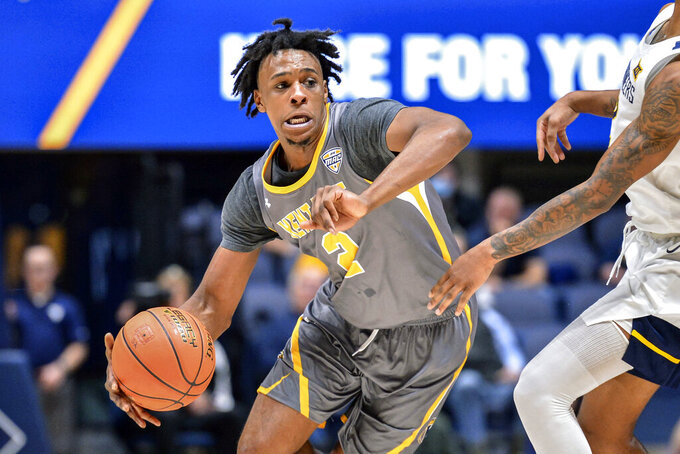 CLEVELAND (AP) — Four Kent State players, including starting guard Malique Jacobs, have been disciplined by the Mid-American Conference for a profane video posted in advance of Saturday’s championship game against rival Akron.

The league said forward DJ Johnson has been suspended indefinitely, while Jacobs and reserves Cli’Ron Hornbeak and Julius Rollins will have to sit out the first half of the title game for the Golden Flashes.

Following Friday’s 67-61 semifinal win over Ohio, the four players filmed a video in their locker room and posted it on Snapchat. In the clip, one of the players is using profane language directed at Akron. The video was shared on Twitter.

“I’m disappointed this occurred,” said MAC commissioner Dr. Jon Steinbrecher. “This does not represent the values of Kent State or the Mid-American Conference. However, I commend the leadership of Kent State for being proactive in addressing this matter and collaborating with my office to bring this situation to resolution.”

“We are aware of a video posted by a member of the men's basketball team,” the school said before the discipline was announced. "The behavior in the video does not reflect the core values of Kent State, nor does it live up to the standards we expect of our student-athletes.

“We expect all members of our Kent State community to act in accordance with our values and behavior to the contrary will not be tolerated.”

Jacobs scored a team-high 19 points and had 10 rebounds in Kent State’s win over Ohio.

Kent State and Akron, whose campuses are separated by 10 miles, have one of the nation’s most bitter rivalries. The Golden Flashes won both games during the regular season and are seeking their first NCAA bid since 2017.

The Zips, who upset top-seeded Toledo in the semis, haven’t been in the NCAA field since 2017.