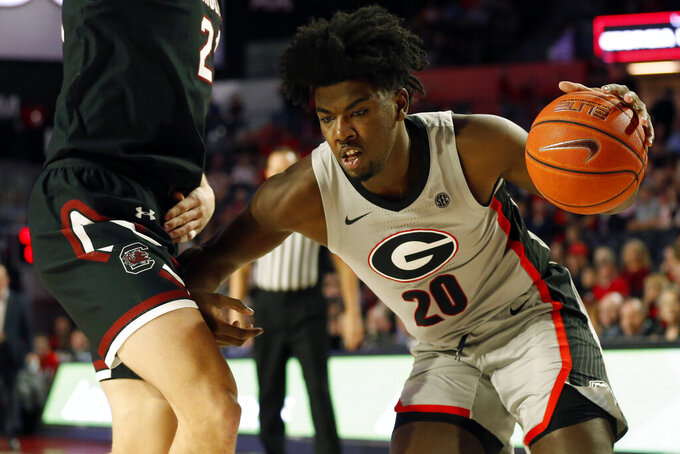 The 6-foot-9, 235-pound Hammonds averaged 12.9 points while leading the Bulldogs with 7.4 rebounds per game. He was second on the team in scoring, behind freshman Anthony Edwards, who also has entered the draft.

While Edwards could be the top pick in the draft, Hammonds' draft outlook is far less certain. When announcing his plans on his Twitter account on Friday, Hammonds said he is protecting his option to return for his senior season.

Georgia coach Tom Crean says he already has requested “quality and thorough information” from the NBA's underclassmen committee to help Hammonds determine where he may be picked in the June 25 draft.

“Also, we'll help get it from the individual NBA teams during a time that is so unique and unknown as far as how this entire draft process will work out for everyone,” Crean said.

Hammonds appears to believe he has completed his college career. He said he was thankful for his three seasons at Georgia and wrote “It has been fun being a Bulldawg.”

Hammonds, from Norcross, Georgia, scored 20 or more points in seven games this season, including 26 points in an 82-78 win over Georgia Tech on Nov. 20.

He had 22 points and 11 rebounds in Georgia's 81-63 win over Mississippi in the Southeastern Conference tournament. The remainder of the tournament was canceled by the coronavirus.