Gonzaga beats Pepperdine 86-66 in first game back at No. 1 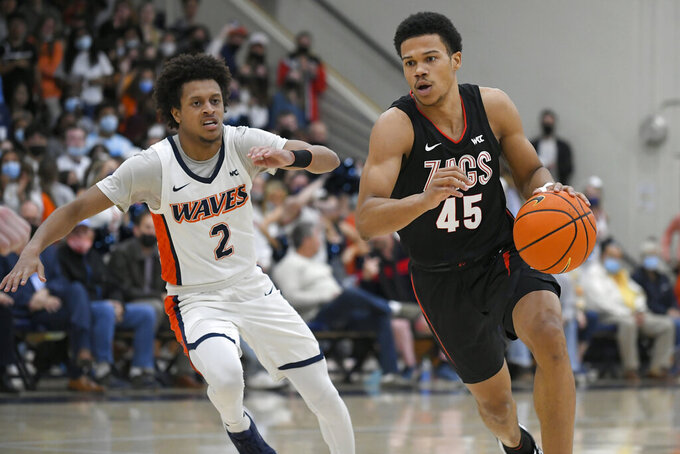 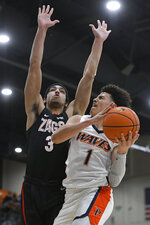 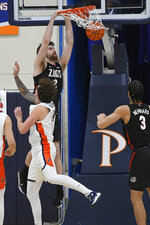 Timme threw down an alley-oop dunk on a pass from Nembhard just six seconds in, and it was that kind of game for both teams.

Gonzaga (22-2, 11-0 West Coast Conference) never trailed and has won 15 consecutive games since its last lost against Alabama in December.

The Bulldogs have also won 32 straight against WCC opponents, the longest conference winning streak in the country.

“They could win the whole thing,” Pepperdine coach Lorenzo Romar said. “They have size, they have scoring ability, they can guard. Holmgren’s obviously really good. Timme could be the player of the year. They have outstanding perimeter players."

Houston Mallette scored 16 of his 25 points in the second half for the Waves.

Six players scored for the Zags in a 14-2 run that built a 24-11 lead. Nembhard was distributing the ball with ease.

“I was just reading the defense and executing our plan,” Nembhard said. “They were kind of pressuring me with two guys. Just reading the game and keeping it simple.”

Pepperdine (7-21, 1-12) got nine points from Mallette in a 20-11 spurt that trimmed the margin to 57-49 in the second half. Timme answered with a three-point play inside and Gonzaga turned back the Waves.

“We got back to taking care of the ball and we were able to string together some stops,” Bulldogs coach Mark Few said. “They were hitting some good, tough shots on us. We just needed to step up and make a stand, especially on the defensive end, and I think we were able to do that.”

Holmgren had nine rebounds in the second half and has been much improved in that department recently.

“I’ve noticed that these last three-four games he’s really starting to go up, not only pursue the ball, but he was having a heck of a time early in the year hanging onto it after he got it,” Few said. “For the most part, he’s been getting two hands on it and holding onto it.”

About 12 NBA scouts were at the game.

Pepperdine’s last win over Gonzaga was in 2002 in Malibu. The Bulldogs have won 42 straight games against the Waves.

The Bulldogs stayed in Santa Monica and with an 8 p.m. local tip time, some players had a chance to check out the Santa Monica Pier.

Gonzaga: Playing their first game since returning to No. 1 in the nation, the Bulldogs did exactly what they were supposed to in winning on the road against a team they’ve dominated over the last two decades. But they allowed the Waves to make a big run to cut a 21-point lead to eight in the second half.

Pepperdine: The Waves can chalk this up to a good learning experience for everyone, including their six freshmen. Pepperdine didn’t come close to allowing 117 points, as it did in Spokane last month, so that was an improvement.

Pepperdine: Plays at Portland on Saturday.