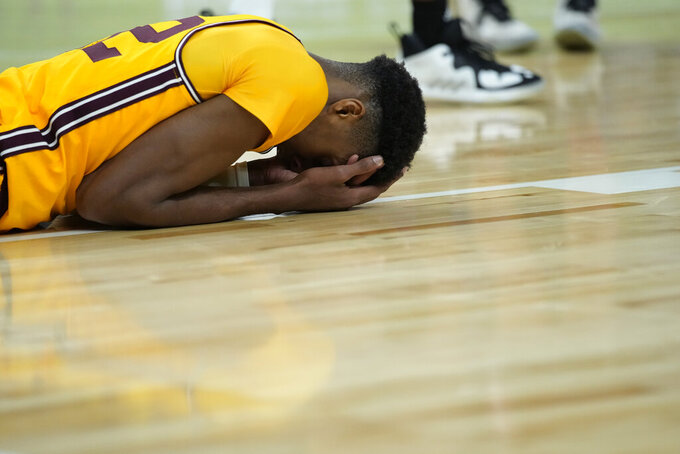 Arizona State's Alonzo Gaffney (32) holds his head after a play against Stanford during the second half of an NCAA college basketball game in the first round of the Pac-12 tournament Wednesday, March 9, 2022, in Las Vegas. (AP Photo/John Locher)

LAS VEGAS (AP) — James Keefe capped a double-double by banking in a short jumper at the buzzer as ninth-seeded Stanford closed the game on a 16-1 run to shock eight-seeded Arizona State 71-70 in the Pac-12 Conference tournament opener on Thursday.

Stanford faces top-seeded and second-ranked Arizona on Thursday in the quarterfinals.

Spencer Jones made a 3-pointer with 37 seconds left to pull Stanford within 70-69 and the Cardinal elected not to foul. Stanford freshman star Harrison Ingram rebounded Jalen Graham's missed 10 footer with nine seconds left and weaved his way up court but had the ball stripped as the spun in the lane. Keefe picked up the loose ball , elevated and his floater, released with a half-second remaining, went off the backboard, the front of the rim and the backboard again before dropping through, giving Stanford an improbable win.

Jones hit six 3-pointers and scored a career-high 26 points for the Cardinals (16-15), who had lost five straight and seven of eight. Keefe had 16 points on 7-of-8 shooting and 10 rebounds and Brandon Angel added 15 points.

Arizona State (14-17), which had won four straight and seven of eight, including a 65-56 win over the Cardinal to close the regular season, lost despite matching the tournament record of 15 3-pointers.

The Sun Devils ended up 15 of 28 on 3-pointers, tying the tournament record Stanford set against Arizona State in an overtime game in 2013. It also matched ASU's season high on 11 fewer shots but the Sun Devils were 11 of 33 inside the arc and just 3 of 7 from the foul line, all in the second half.