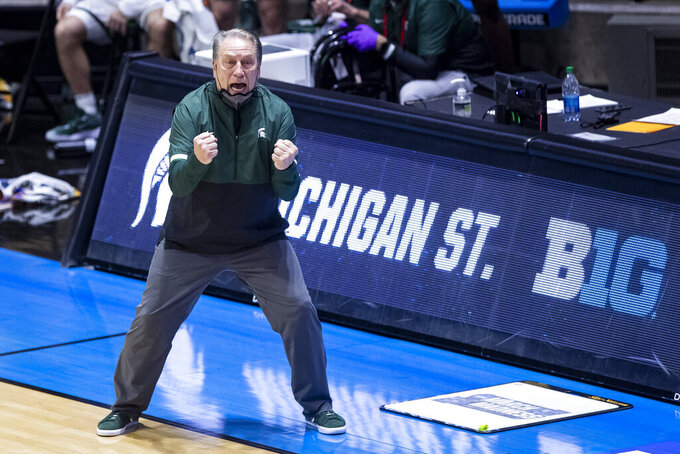 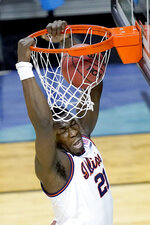 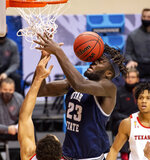 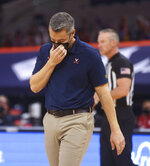 The Latest on the first round of the NCAA Tournament (all times Eastern):

Another first-round upset as 12th-seeded Oregon State defeated No. 5 Tennessee 70-56 in the Midwest Region.

Roman Silva scored 16 and Ethan Thompson 13 with 10 rebounds to lead the Beavers.

Keon Johnson had 14 points and six rebounds for the Vols.

Oregon State became the first Pac-10/12 school to win the conference tournament after being picked to finish last. It is now the 51st No. 12 seed to take down a 5 since the NCAA Tournament bracket expanded in 1985.

The Beavers hadn’t won a tournament game since beating Idaho in 1982.

Jordan Usher scored 15 points, Michael Devoe had 14 and Jose Alvarado 13 for the Yellow Jackets, who were forced to play without ACC player of the year Moses Wright after the big man tested positive for COVID-19 earlier in the week.

MaCio Teague scored 22 points and the top-seeded Baylor Bears shook off a slow start to roll to a 79-55 victory over No. 16 Hartford in the South Region.

Baylor (23-2) opened its March Madness run at the same stadium the Final Four will take place in during the first week of April. All this year’s tournament games are being played in quarter-filled venues in Indiana because of the COVID-19 outbreak.

Oral Roberts has pulled off the first upset of the NCAA Tournament with a 75-72 overtime win over second-seeded Ohio State in the South Region.

Kevin Obanor had 30 points, one more than teammate Max Abmas for the high-scoring Golden Eagles.

EJ Liddell had 23 points and 13 rebounds and Duane Washington had 18 points and 10 boards for the Buckeyes.

There’s been a sister sighting for Loyola Chicago’s first-round game against Georgia Tech.

Sister Jean Dolores Schmidt, the Ramblers’ 101-year-old team chaplain, was rolled into the fieldhouse in her wheelchair bundled up in a yellow-and-red scarf and wearing a mask that read Loyola shortly before the opening tip Friday night.

Sister Jean became an icon during Loyola's Final Four run in 2018, but she hadn’t attended a game in person since the pandemic began. She recently was vaccinated but has continued to keep her distance from the team, delivering the pregame prayer virtually all season and again prior to the Ramblers’ game against the Yellow Jackets.

UCLA and Michigan State was the most-watched First Four game since the NCAA Tournament expanded to 68 teams in 2011, according to CBS and Turner Sports.

The networks said the Bruins overtime victory against Michigan State averaged 3 million viewers and peaked at 3.3 million from 11 p.m.-11:15 p.m. EDT, based on data from Nielsen.

Overall, the four games played Thursday and televised on TBS and truTV drew 7.6 million viewers across all platforms, including streaming.

Viewership was up 36% from 2019′s First Four, according to the networks. The entire First Four was played on one day for the first time in this tournament. Usually, two of the games are played on Tuesday and the other two on Wednesday when the tournament is in a normal schedule.

Moses Wright, the Atlantic Coast Conference Player of the Year, is out for Georgia Teçh’s first-round matchup with Loyola-Chicago.

The 6-foot-9 senior forward, however, has not been forgotten by his teammates.

Georgia Tech guard Jose Alvarado is wearing Wright’s No. 5 as the ninth-seeded Yellow Jackets take on the eighth-seeded Ramblers.

The Yellow Jackets went with a smaller lineup with Wright unavailable. Senior guard Bubba Parham, who is 5-10, got the start instead as Georgia Tech went with a guard-heavy look.

Tennessee senior forward John Fulkerson won’t be playing in the Volunteers’ first-round game with Oregon Stat after taking elbows to his head from Florida’s Omar Payne in the Southeastern Conference Tournament, causing a concussion and facial fracture.

Payne did not play in Florida’s tournament-opening, overtime win over Virginia Tech.

Utah State’s Neemias Queta made history in a lopsided loss to Texas Tech on Friday.

Queta became the second player in the NCAA Tournament since blocks became a recognized stat to finish with at least 10 points, 10 rebounds, five assists and five blocks in a game.

He had 11 points, 13 boards, six assists and seven blocks in a 65-53 loss to the Red Raiders. The other player to accomplish the feat was Baylor’s Ekpe Udoh in 2010.

Hartford’s D.J. Mitchell left his team’s South Region game against top-seeded Baylor seconds after tipoff. Mitchell injured his left ankle when he landed awkwardly as he released a 3-point shot.

Mitchell immediately grabbed the back of his leg and needed help to get off the court. Baylor’s Mark Vital was called for a foul, even though it didn’t appear he touched Mitchell. Miroslav Stafl shot three free throws in Mitchell’s place and made one.

Kofi Cockburn muscled his way to 18 points and Illinois cruised past 16th-seeded Drexel 78-49 in the Illini’s first NCAA Tournament game as a No. 1 seed in 16 years.

Illinois will face eighth-seeded Loyola Chicago or ninth-seeded Georgia Tech in the second round of the Midwest Regional on Sunday.

Drexel never really had chance at containing the 7-foot, 285-pound Cockburn, who was 8 for 11 from the field for the Big Ten champions.

James Butler drew the daunting task of trying to handle Cockburn, without much success. The senior did have 10 points and 10 rebounds for Drexel.

Arkansas has advanced to the second round of the NCAA Tournament with an 85-68 win over Colgate in the South Regional.

The third-seeded Razorbacks (23-6) fell behind by 14 points early the opening half but closed the period with a 17-0 run to gain a three-point lead at the break and Colgate couldn't recover.

Justin Smith had 29 points and Jalen Tate 15 to lead five players in double figures for the Razorbacks.

Nelly Cummings had 14 points and Jordan Burns 13 to lead Colgate (14-2), which committed 22 turnovers.

Players from several NCAA Tournament teams took a knee during the playing of the national anthem before their first-round games.

Most of players on 16th-seeded Drexel knelt for the anthem before the Dragons played Illinois at the Indiana Farmers Coliseum, and several Colgate players did the same before the they played third-seeded Arkansas at Bankers Life Fieldhouse.

A few players also took a knee during the anthem before Florida-Virginia Tech at Hinkle Fieldhouse.

College athletes have not been shy about showing public support for social causes and even pushing back against perceived inequities by the NCAA. Earlier this week, several prominent men’s players got the hashtag #NotNCAAProperty trending to protest NCAA rules that ban athletes from earning money off their names, images and likenesses.

At the women’s tournament in San Antonio, players have pointed out how workout facilities have been far from equal to what has been provided to the men’s players.

Virginia has finally arrived in Indianapolis, the 68th and final team to do so.

The Cavaliers remained in Charlottesville after a positive COVID-19 test caused them to pull out of the Atlantic Coast Conference Tournament before a semifinal game against Georgia Tech last Thursday.

The Cavaliers have been testing daily since and were to practice at home in the morning for the first time since they paused team activities and then travel to the site of this year’s tournament. Their arrival puts them two sets of negative tests away from facing Ohio on Saturday night.

Virginia is technically still the reigning national champion because it won the title in 2019 and last year’s tournament was canceled because of the pandemic.

Florida will have to contend with Virginia Tech without sophomore forward Omar Payne.

The 6-foot-10 Payne is being held out of the seventh-seeded Gators’ first-round matchup with the 10th-seeded Hokies. The school said the decision was made by head coach Mike White.

Payne was ejected from the SEC Tournament quarterfinals early in the second half for a flagrant 2 foul against Tennessee’s John Fulkerson. The ejection came after a review by officials. Fulkerson suffered a concussion and facial fracture and was uncertain for Tennessee’s opener against Oregon State.

The SEC didn’t suspend Payne, who is averaging 3.7 points and 3.2 rebounds in about 16 minutes a game this season.

The Gators had issues with Virginia Tech’s size in the first half. The Hokies dominated in the paint for stretches while building a 33-27 lead.

The first game of the first round between No. 7 seed Florida and 10th-seeded Virginia Tech is underway at historic Hinkle Fieldhouse and a cloudless day outside has brought a significant amount of natural light into the arena.

Hinkle Fieldhouse has windows circling the concourse level of the arena and shades have been pulled down at the south end to try and help keep the sun out of the players' eyes. But windows at the top of the arched-roof building are still allowing in sunlight.