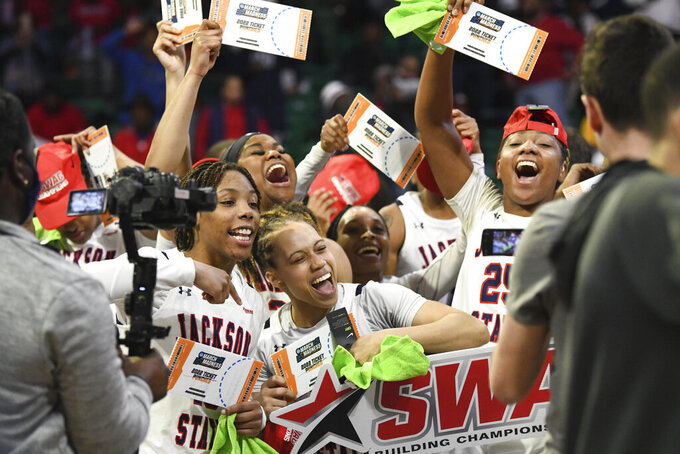 FILE - Jackson State celebrates after winning an NCAA college basketball game in the championship of the Southwestern Athletic Conference tournament against Alabama State, Saturday, March 12, 2022, at Bartow Arena in Birmingham, Ala. In basketball, whether a team wins a conference regular-season title, a conference tournament title or no conference title at all has very little bearing on what the final verdict will be. (AP Photo/Julie Bennett, File)

If the latest spasm of conference realignment in college sports was supposed to spell doom for the Big 12 or Pac-12 — or for any other conference, for that matter — somebody forgot to tell the basketball coaches.

In college hoops, where virtually all success is measured by how a team, or conference, fares in March Madness, the 2022-23 campaign about to tip off looks a lot like business as usual.

With football-driven realignment joining the rapidly expanding transfer portal and the players' newfound and meagerly regulated ability to make money off their celebrity, the postseason NCAA tournaments, men's and women's, are, more than ever, the glue that holds the increasingly fractured fabric of college sports together.

“At the end of the day, you play for the tournament,” Syracuse coach Jim Boeheim said recently in summing up the bottom line of any college basketball season. “If you can't play in the tournament, then you're not good.”

In football, even after the announcement that the postseason will expand to 12 teams by 2026, a conference title has and will always be the most direct route to one of the few coveted spots in the playoff.

In basketball, whether a team wins a conference regular-season title, a conference tournament title or no conference title at all has little bearing on what the final verdict will be. Of the past 10 national champions, only three won their conference tournament. Hardly anybody, for instance, thinks of St. Peter's as the MAAC champion but anyone following the sport knows the Peacocks made it to the Elite Eight last year.

The same is true whether a team hails from the West Coast Conference (where Gonzaga is a major power every year) or the Big 12 or Pac-12, which appeared to be among the so-called “losers” in the most recent shuffling of teams to new conferences.

Last summer, Texas and Oklahoma announced they would be leaving the Big 12 to join the SEC. This summer, UCLA and Southern California said they were leaving the Pac-12 for the Big Ten.

Though there will only be room for one or two teams from each conference, the expanded football playoff could be worth more than $2 billion in media rights for 11 games. That would be about double what the basketball rights are worth in annual terms (and not distributed to as many conferences or programs).

It explains the reason for the moves, but does not necessarily portend the end of the Big 12 or Pac-12.

A lot of that is thanks to March Madness. Letting small guys go against the behemoths in a 68-team bracket each season remains an ingeniously simple idea — one that has left the bottom line in basketball, at least on the court, largely the same despite steady changes to the business model.

In fact, the Big 12 heads into the 2022-23 season as the top-ranked basketball conference in the nation, on the strength of the last two national champions (Kansas and Baylor), a stacked team at Texas (still in the league for now), a strong TCU team and perennial contenders such as Kansas State and West Virginia. As of last week, for what it's worth, the conference had three football teams ranked in the AP Top 25.

And coming soon to the Big 12, after the latest round of realignment is complete, are Cincinnati and Houston — a pair of brand names in basketball; the Cougars were in the Final Four two seasons ago.

The Pac-12 does not have the same depth, but even after it loses the two SoCal teams, it will still have a perennial powerhouse in Arizona, a 21st century Goliath in Oregon and at least one program enjoying a mini-renaissance in Colorado; neither Arizona nor Colorado have been powerhouses in football for decades.

“I don't lose any sleep over what conference we're going to be in, or what could happen,” said CU coach Tad Boyle. “Because the University of Colorado is a great academic institution. We've got a great brand name.”

It's a brand name that has shown up in the bracket in five of the last 10 tournaments — hardly the stuff of North Carolina or Duke, but enough to keep it relevant, even in an era in which the football program has struggled to 13 victories over the past 3 1/2 seasons.

Which is still 13 more victories than Gonzaga has because Gonzaga does not play football.

The Zags open yet another season as a favorite to make the Final Four. A few years ago, with the football-playing Mountain West Conference perennially knocking on the door, Gonzaga cut a deal with the WCC: It would stay in the hoops-only league if, instead of splitting things evenly, the conference would give the Zags a bigger share of its NCAA tournament proceeds based on how they performed in March.

“We just felt that the more you advance, the bigger the amount should become,” then-athletic director Mike Roth said, “because at that point, it’s not about the conference, it’s the school that’s earning it.”

Unlike football, where Alabama, Georgia and LSU are intrinsically linked to the SEC and all the advantages that conference offers on the gridiron, when people think “Duke, or “Kansas” or “Gonzaga” they don't think as much about a conference.

Unlike football, where wins in the Auburn-Alabama, Ohio State-Michigan, Texas-Oklahoma or UCLA-USC games can define a season for a program, regardless of the postseason, there is hardly ever such meaning attached to a regular-season meeting in basketball outside of Tobacco Road.

Nobody articulates it better than Boeheim, a 47-year coaching veteran whose program moved from the Big East to the ACC in 2013. Since then, the Orange have been to five tournaments, three Sweet 16s and one Final Four. Not once did they get a piece of either the regular-season or conference-tournament titles.

So, while Boeheim, like every college coach, was busy getting ready for his team's opener in November, it's not where the real focus of his season will be.

“I'll take the Sweet 16 if we finish” sixth in the ACC, he said. “Would I like to do better in the regular season? Sure. But I'll take that every year. We've been very good in the tournament.”