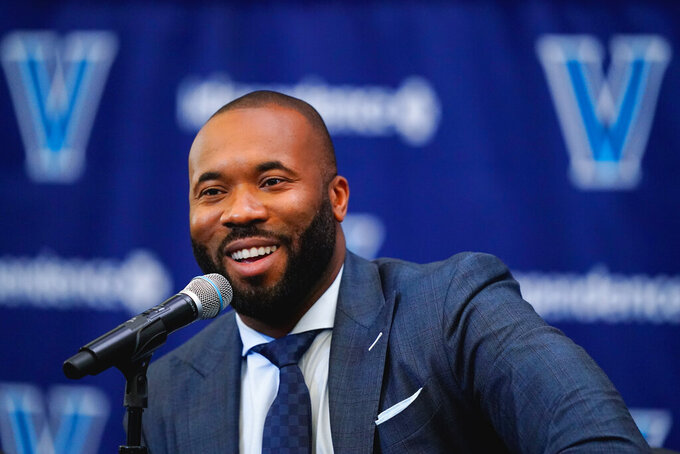 PHILADELPHIA (AP) — Jay Wright patted his chest in appreciation of the cheering crowd before he threw a first pitch to Phillies manager Joe Girardi. Wright then took the ball from Girardi, hustled back and handed it to Kyle Neptune so the new Villanova coach could lob his own ceremonial strike.

Wright’s call to the bullpen worked great on a lazy Sunday night.

Now comes the part where every game is the bottom of the ninth for the 37-year-old Neptune as he succeeds the retired Wright: Can a longtime assistant with one season of head coaching experience keep Villanova humming along as a perennial Big East Conference champion with Final Four expectations?

Neptune certainly knows Wright’s blueprint following a lengthy stint that started in 2008 as a video coordinator and ended with him as the longest-tenured member on the coaching staff that won the 2016 and 2018 national championships.

“He knows it all. He has the answers to the test,” Villanova athletic director Mark Jackson said.

Neptune was mapping out Fordham’s season and was headfirst into recruiting when he got the call early last week that Wright had made the shocking decision to retire. The hiring process was short: Neptune talked with Villanova’s key decision-makers — sounding less like a formal interview and more like a confirmation hearing — and was named just the program’s sixth coach since 1938.

Neptune already had recruited or coached most of the players on Villanova’s roster and already was colleagues with the assistant coaches he said would stay on staff. George Halcovage, Mike Nardi and Dwayne Anderson have spent years with Neptune.

“I don’t think he thinks of himself as the boss. I think he wants to feel like one of the guys, like he’s always done,” said Nardi, who also played under Wright. “The only thing that’s going to change is he’s got to make the final decision.”

Taking over for a Hall of Famer is rarely easy. The Wildcats are a top team seemingly every season, and they went to their fourth Final Four under Wright this season after winning the Big East Tournament.

One knock on Wright is a coaching tree with cracks in the trunk. Pat Chambers, Ashley Howard, Baker Dunleavy, Tom Pecora, Joe Jones and Billy Lange are among Wright’s former assistants who never reached the NCAA Tournament as head coaches. Neptune went 16-16 in his lone season at Fordham, an Atlantic 10 program with just four NCAA Tournament appearances.

“That’s where our assistants struggle,” Wright said. “They learn here there’s no place like this place. There’s so many great things about this place that don’t kind of fit at other places.”

Wright did wonder about staying for another season, but what if Neptune had a losing record at Fordham? Wright knew the sales job would only get harder, so he suggested a successor with deep Villanova ties coming off what could only be considered a successful season for a downtrodden Fordham program.

“It’s not like the old days where the coach just picks his guy,” Wright said. “You’ve got to do it in concert with the university.”

A native of Brooklyn, Neptune played four seasons at Lehigh and served as a team captain in his senior year of 2006-07. He briefly played overseas, but a coaching career tugged at him. Wright hired him as a low-salary, long-hour, little-appreciated video coordinator.

“Back then, the technology wasn’t what it was now. It was a lot of breaking down film, long hours of scouting reports,” he said.

Neptune is the seventh Black head coach in the Big East, but the first one at a university that is roughly 70% white.

“I’m thrilled for any example that I could be to young, especially younger, African Americans in general, but also young males, that are coming up in the coaching world; I’m excited to be an ambassador in that regard,” Neptune said. “I hope that this trend continues.”

Wright was known as GQ Jay for his custom-made suits but he moved to casual sweats during the pandemic. Neptune wore a suit at Fordham — a look that fit him as well as the title of head coach. Now the man gets to try both on for size at Villanova.

“We’ve got everything here. We’ve got the leadership. Everything is in place,” Wright said. “So now it’s going to be, you’re going to come to play for Kyle, but also this culture is going to stay the same.”