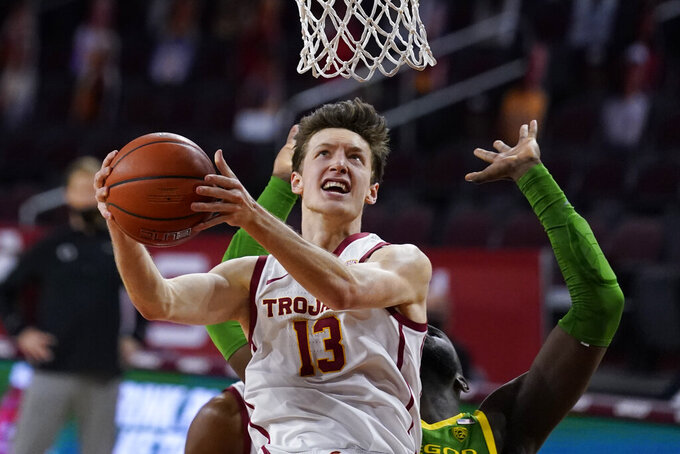 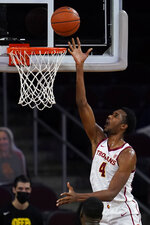 LOS ANGELES (AP) — Southern California hasn't lost two games in a row all season, and the 19th-ranked Trojans weren't about to let it happen now.

Coming off an eight-point loss to Arizona, down a starter and having just one day to prepare, the Trojans led by 16 after a blistering start on their way to a 72-58 victory over Oregon on Monday night.

“We feel like we let one slip against Arizona,” said Tahj Eaddy, who scored 24 points. “We wanted to let teams know you can’t bully us. We’re showing we’re fighters.”

The Trojans (19-4, 13-3) moved into sole possession of first place in the Pac-12 by dominating the Ducks with just a seven-man rotation. Second-leading rebounder Isaiah Mobley strained his right calf against Arizona and missed his first start of the season.

“We kind of made a point of emphasis to come out with the right intensity,” Eaddy said. “We weren’t going for what happened against Arizona, so that kind of contributed to our big start.”

The teams were supposed to play Jan. 30, but the game was postponed due to COVID-19 issues with the Ducks. It got rescheduled on just four days' notice.

LJ Figueroa and Eric Williams Jr. scored 14 points each for Oregon, which had its five-game winning streak snapped. The Ducks (14-5, 9-4) came in tied with USC and UCLA at three losses apiece in league play.

Eaddy scored USC's first nine points — all on 3-pointers — and the Trojans raced to a 17-1 lead while the Ducks missed their first 12 shots.

“It was 9-0 before I could even get a drink of water,” Oregon coach Dana Altman said.

Eaddy, a graduate transfer from Santa Clara, hit five 3s in the half, his last one giving USC a 23-point cushion, its largest of the period.

The Trojans made 17 of 26 shots in the half. Oregon missed seven of eight 3-pointers and shot 10 of 29 from the floor.

“They threw a knockout punch in the first five minutes of the game,” Altman said. “We just didn’t get anything going offensively. We were just stuck in the mud. Defensively, no activity.”

Oregon tried a full-court press in the second half, but it didn't stop the explosive Trojans. They got 15 points and a season high-tying 11 rebounds from Drew Peterson, and 11 points from Evan Mobley.

“We really needed to get all the guys on the glass,” Peterson said. “We all stepped up being physical after that performance against Arizona being a little soft.”

Eaddy's sixth 3-pointer early in the second half extended USC's lead to 26.

After trailing by 18, the Ducks got to 64-54 on consecutive 3s by Figueroa, who had two, and Williams, who finished with four fouls and nine rebounds.

Max Agbonkpolo hit a 3-pointer from the right corner for the Trojans, sparking a 5-0 run capped by Mobley's third dunk of the game that kept them ahead 72-56.

The Ducks outscored USC 36-29 in the second half, but were held without a field goal over the final five minutes.

Oregon: The Ducks have three games left, all on the road, but two of their opponents have losing records. “We're going to have to get energized,” Altman said.

USC: The Trojans responded fiercely from the nine-point Arizona loss that dropped them two spots in the Top 25 this week and snapped their seven-game winning streak. They've won 14 of their last 16 and have four games remaining — three on the road — ahead of the Pac-12 Tournament in Las Vegas. “We control our own destiny,” Eaddy said. “It's going to be a tough road but we're ready.”

USC guard Ethan Anderson returned to the starting lineup. He had six points, seven rebounds, eight assists and one turnover in 34 minutes. He missed more than a month because of back issues and once he returned on Jan. 14, he had to play his way back into shape. “He was all over the court,” coach Andy Enfield said. “Having him back (as a starter) and playing well was very important.”

USC: Visits Colorado on Wednesday. The Buffaloes are 8-1 at home.