No. 21 Illinois runs away in 2nd half to sweep Purdue 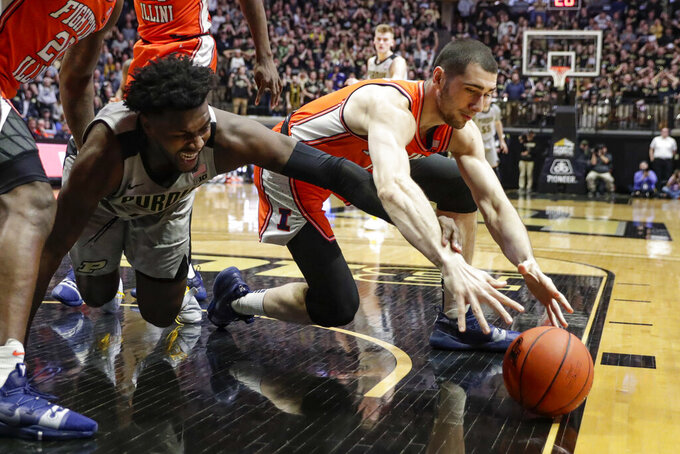 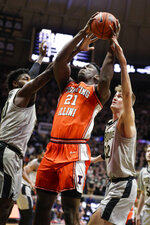 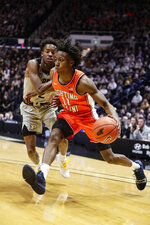 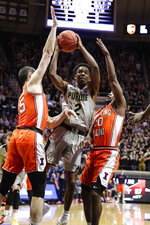 Then the Fighting Illini reverted to form.

Kofi Cockburn scored 22 points and grabbed 15 rebounds, Trent Frazier added 21 points and Illinois pulled away in the second half to beat Purdue 79-62.

“I don't know if you can ever count on going 9 of 10 to start the second half, but I thought our guys executed," Underwood said. “All you can ask is for an opposing coach or players to say ‘You guys played really, really hard and out toughed us.’ ”

It's another milestone victory for the resurgent Illini (14-5, 6-2 Big Ten), winners of five straight.

They're off to their best conference start since 2005-06, ended a seven-game losing streak at Mackey Arena and swept the season series with Purdue for the first time since 2008-09.

And after an atypical start to the game, Underwood got his team to follow a more common theme over the final 20 minutes. They outscored Purdue 50-32 in the second half, never giving the Boilermakers a chance.

Nojel Eastern had 14 points and Trevion Williams scored 12 to lead Purdue (10-9, 4-4), which has lost four of five and watched a 15-game winning streak in conference home games end.

“We were struggling to keep them out of the paint," said Matt Haarms, who had 10 points, six rebounds and three blocks. “That was one of the points of emphasis before the game and we just weren’t to able to execute it.”“

The Illini swung the momentum quickly, opening the second half with seven straight points to erase a 30-29 halftime lead. Then, after making five straight baskets to make it 49-39 with 13:30 to play, they extended the margin to 60-45 on Giorgi Bezhanishvili's 3-pointer with 8:27 left.

“They didn’t do anything differently (in the second half), they executed better," Purdue coach Matt Painter said. “Illinois’ fight is so much better than ours. They have a great competitive spirit."

Illinois: The Illini pulled off a rare feat by winning a Big Ten road game. And the reason is obvious — defense travels. Illinois came into the game allowing 57.3 points as teams shot just 36.6% from the field and 31.1% on 3s during their previous four wins. They weren't quite as good Tuesday, allowing Purdue to shoot 41.1% from the field and 37.5% on 3s — but they were more than good enough.

Purdue: The Boilermakers keep struggling to score, and it caught up to them again on Tuesday. After scoring only 37 points in the first meeting with Illinois, the Boilermakers couldn't reach the 60-point mark on their home court until the final minute. If coach Matt Painter can't find a solution soon, with the midway point of conference play fast approaching, it could be an even tougher final two months.

Illinois: Ayo Dosunmu finished with 18 points and a career high 11 assists. Bezhanishvili had 10 points. ... Cockburn nearly posted a double-double in the first half with nine points and nine rebounds. ... Frazier's streak of turnover-free basketball ended at 193 minutes Tuesday. The guard went nearly 6 1/4 games between turnovers. ... The Illini also snapped a seven-game losing streak at Mackey Arena.

Illinois guard Alan Griffin was ejected with 12:21 left in the first half for a flagrant 2 foul.

A replay review showed Griffin intentionally stomped on Stefanovic's midsection after the Purdue guard had driven to the basket for a layup, bringing a crescendo of boos from the crowd. Stefanovic made one of two free throws for an unusual three-point play.

Underwood wasn't any happier about it than the Purdue fans.

“He apologized to the young man and we don’t condone any of that," he said. “That’s not part of anything we’re trying to do in our program.”

Illinois hits the road again Saturday when it heads to Michigan.