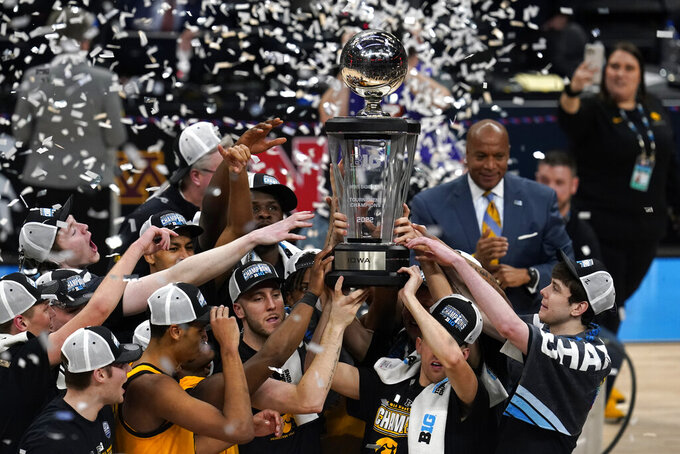 He hopes to keep playing into April before making a decision about the NBA.

Murray capped a remarkable week with 19 points, 11 rebounds and three assists to lead No. 24 Iowa past No. 9 Purdue 75-66 on Sunday, giving the fifth-seeded Hawkeyes their first conference crown since 2006 and the league's automatic bid to the NCAA Tournament.

“We knew this team was destined for greatness,” said Murray, the tournament’s Most Outstanding Player. “We changed the direction of the Iowa program today.”

They certainly added a new chapter by becoming the fourth team to capture the conference's tourney crown with four wins in four days. Iowa was also the first team to do it, in 2001.

But that's only part of the equation for one of America's most prolific offenses. The Hawkeyes posted a record 351 points in Indianapolis, easily surpassing Ohio State's mark of 322 set last year.

Next up is another chance to rewrite Iowa's record books.

A win over 12th-seeded Richmond on Thursday in Buffalo, New York, would put fifth-seeded Iowa within one win of its first Sweet 16 appearance since 1999 and two wins away from Iowa's first regional final since 1987.

None of that is lost on this team.

“All three of my brothers won conference titles and I heard about that all of the time,” longtime Iowa guard Jordan Bohannon said. “It was just nonstop for me, so it's a big deal for me to come in here and win. I think that’s what was so important these last five, six years. We’ve been through everything adversity-wise and now we’re living in the moment we always dreamed about as kids."

It wasn't easy returning to the building where Iowa was eliminated by Oregon in the second round of last year's NCAA Tournament.

The Hawkeyes needed Bohannon's 3-point bank shot with 0.8 seconds left to silence a heavily partisan Indiana crowd in Saturday's semifinals and then returned Sunday, trying to quiet a heavily partisan Purdue crowd that was on its feet when Eric Hunter Jr. made a 3-pointer with 3:13 left to cut Iowa's lead to 63-62.

Jaden Ivey finished with 20 points and six assists and Trevion Williams had 11 points and 11 rebounds for Purdue (28-7). But neither could get the Boilermakers any closer as they failed to win the regular-season or tournament title despite spending most of this season as the league's top-ranked team.

“I did a horrible job today just leading and trying to get us back in the game,” Ivey said. “I felt like I made some bad reads and some turnovers and I feel like I lost this game.”

After Hunter's big shot, Connor McCaffery with a three-point play on Iowa's next possession to make it 66-62, and the Hawkeyes only allowed four more points.

Iowa: A strong finish — and tourney title — propelled the Hawkeyes to a No. 5 seed, though they didn't get the short trip to Milwaukee. Still, this is a team that has won nine of 10, is playing its best basketball of the season and has plenty to prove at tourney time against the Atlantic 10 champs.

Purdue: This loss may have cost Purdue a No. 2 seed and a short trip back to Indianapolis. Instead, the third-seeded Boilermakers will face Ivy League champion Yale on Friday in Milwaukee. Purdue lost to North Texas in the first round last year.

Iowa will continue ascending in Monday's rankings, perhaps even cracking the top 15. The bigger question is whether Purdue did enough to extend its record streak of consecutive weeks in the top 10 to 19.

Murry, Bohannon, Ivey and Williams all were selected to the Big Ten's all-tournament team. The final member of the group was Trayce Jackson-Davis, who helped Indiana reach the semifinals.

Iowa: Iowa and Michigan are the only schools to claim a Big Ten Tournament title with four wins in four days. The Wolverines did it in 2017 and 2018. ... The Hawkeyes won this title exactly one week after their women’s team also won its title in Indy. ... Indy native Tony Perkins had 11 points and four assists for the Hawkeyes. Payton Sandfort scored 10 points.