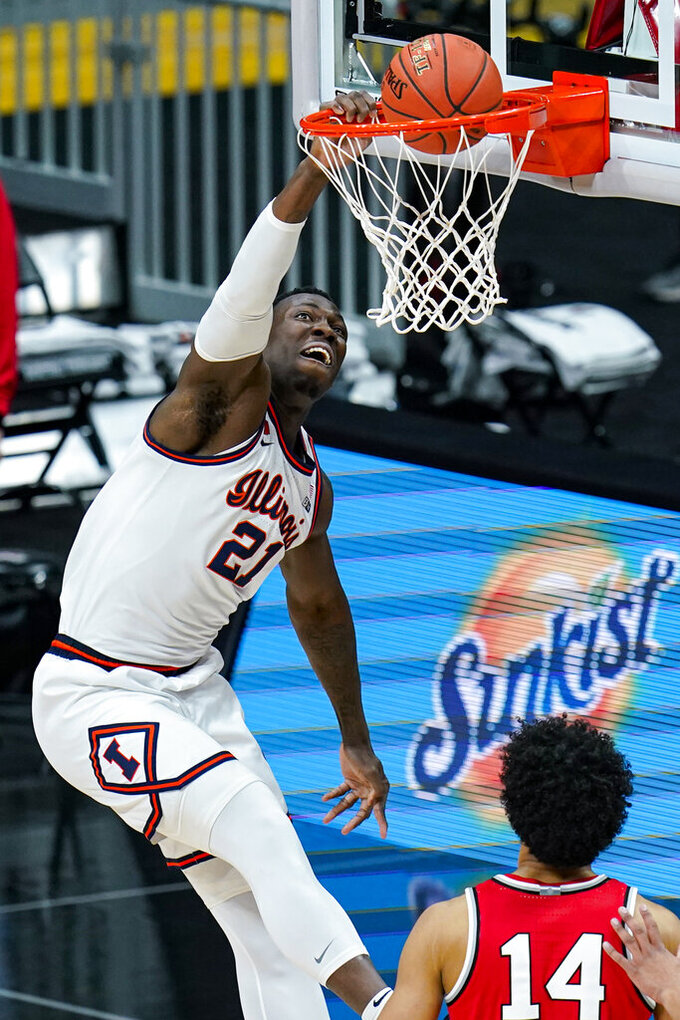 INDIANAPOLIS (AP) — No. 3 Illinois accomplished one major goal. The next one will be even more difficult.

As the Fighting Illini celebrated their first Big Ten Tournament title since 2005 with a 91-88 overtime victory over No. 9 Ohio State on Sunday, they quickly turned the focus to their No. 1 seed in the NCAA Tournament and the opportunity it presents.

”It was crazy, thinking about all the things we've accomplished and knowing how I came on my visit with coach (Brad) Underwood and I told him these are the things we can accomplish," Ayo Dosunmu said after being named the tourney's Most Outstanding Player. “So to get up there, cut that net down and see that No. 1 seed come up there, it’s just an unreal feeling."

Especially given the oddities of this season.

Despite playing the regular season in front of minimal fans, the Illini (23-6) hoisted the trophy underneath the mid-court video board and watched the selection show with a throng of loud, orange-clad fans inside Lucas Oil Stadium.

It all seemed perfectly aligned for the deep and versatile Illini.

Dosunmu, Kofi Cockburn and Andre Curbello all scored 16 points. Cockburn and Dosunmu each had nine rebounds and they made the key plays in overtime. Cockburn sank the go-ahead free throws with 1:39 to go, Dosunmu followed that with a back-breaking 15-footer with 50 seconds left to make it 84-81 and Illinois finally sealed it at the free-throw line.

Illinois will start its next quest against 16th-seeded Drexel on Friday, having won seven straight overall and 14 out of 15 with six consecutive wins over top-10 foes.

Duane Washington Jr. had a career-high 32 points and Justice Sueing added 22 as the Buckeyes refused to go away despite the numerous times Illinois appeared to be in control.

Instead of withering in their fourth game in four days and being without forward Kyle Young for the second consecutive game, Ohio State (21-9) continually fought back. Coach Chris Holtmann expected that reaction from his team, which earned a No. 2 seed in the NCAA Tournament.

“They have that resiliency, they have it, this group has that,” he said. “If you’ve followed us, you know that.”

The Illini answered with seven straight but still couldn't put it away. and Sueing's three-point play with 23.6 seconds left tied the score at 77. Two big defensive plays forced overtime and then Cockburn and Dosunmu delivered, ending one chapter of this season and beginning another.

“It's time to make history," Dosunmu said. “It's time to dig deeper, to focus in a little more, but winning this Big Ten championship is great."

Ohio State: They didn't win the title but the fifth-seeded Buckeyes overperformed expectations. They snapped a four-game losing streak by winning three games in three days, beat regular-season league champ Michigan and head into the postseason with lots of momentum.

Illinois: The Illini are big, fast and strong — making them a legitimate national title contender. And after being shut out of the regular-season crown, they were on a mission to earn some hardware in Indy. Now that they have, they want to add a few more to the collection before leaving town.

Ohio State: C.J. Walker had 16 points, six assists and four rebounds. E.J. Liddell had 12 points, seven rebounds and four assists. ... Holtmann said he didn't know if Young will play in the NCAAs. He was hit in the head by an inadvertent elbow Friday. ... The Buckeyes fell to 4-1 all-time at Lucas Oil Stadium.

Illinois: Curbello also had six rebounds and five assists and Giorgi Bezhanishvili had 12 points. ... Da’monte Williams made three 3s and finished with 12 points while Trent Frazier had 10. ... Illinois broke the single-season school record with six wins over top-10 teams.

Dosunmu and Cockburn were joined on the all-tournament team by Washington and Liddell from Ohio State and Iowa’s Luka Garza, the league’s player of the year.