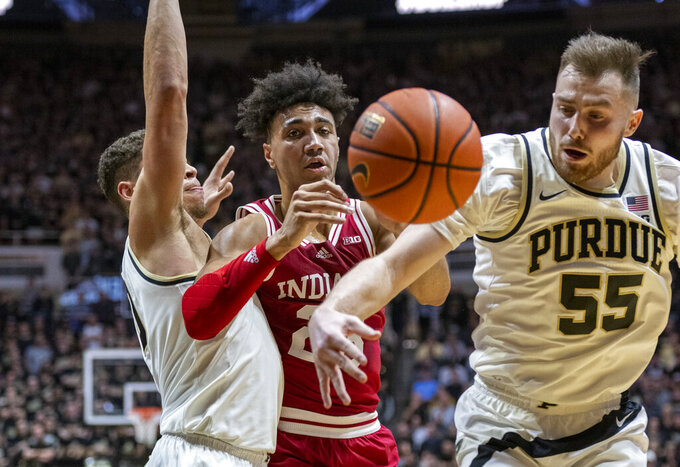 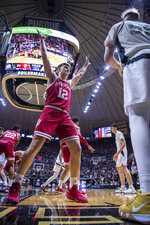 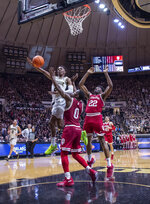 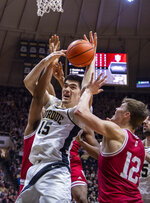 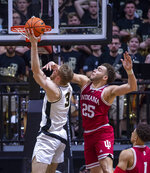 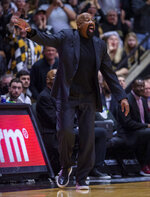 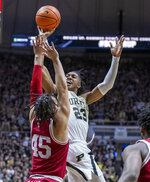 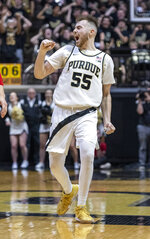 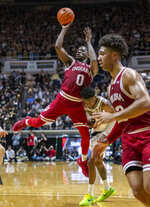 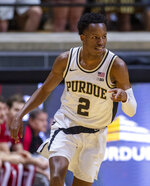 It was the next best thing to a Big Ten regular-season title — a victory over archrival Indiana.

Eric Hunter Jr. had 17 points, Trevion Williams made the tying basket with less than six minutes left and Sasha Stefanovic hit the go-ahead 3-pointer as the eighth-ranked Boilermakers rallied past Indiana 69-67.

“Against IU, there's always a little different energy in here, but it was awesome," Stefanovic said. “I can't really think of a better way to go out of here in Mackey with that crowd and that result.”

All three have announced they will not return next season, and they went out in style. The Boilermakers (25-6, 14-6) snapped a season-long two-game losing streak and gave coach Matt Painter a victory in his 600th career game as a head coach.

No, this one didn’t follow the script, and at times things got ugly, testy and perilous for Purdue. After trailing 56-52 with 5:42 to go, the upperclassmen delivered with a 7-0 run that kept the Boilermakers in front the rest of the game.

“All three made big plays," Painter said. “Trevion, Eric and Sasha all really came through for us."

Xavier Johnson led the Hoosiers with 18 points and a career-high 12 assists, but his half-court heave to win it with 0.3 seconds left was an air ball. Trayce Jackson-Davis had 15 points and six rebounds while Miller Kopp scored 14 points for Indiana (18-12, 9-11).

The Hoosiers have blown late leads in each of their last two games and have lost seven of nine overall.

Indiana got as close as one over the final stretch and had a couple of chances to tie it or take the lead.

But Kopp blew one by turning the ball over on an errant inbound pass with 11.5 seconds left. After Williams missed two free throws with 6.3 seconds remaining, Johnson's desperation heave landed out of bounds with 0.3 seconds left.

“Miller made a bad pass," coach Mike Woodson said. “We’ve completed that pass and there have been times on that play he has made a great play.”

Indiana: All season, the Hoosiers have been on the cusp of big wins. But aside from home wins over Ohio State and Purdue, the Hoosiers have generally fallen short. Too many close losses, like Saturday's, have left Indiana dancing on the edge of making or missing the NCAA Tournament, and a win or two at next week's conference tournament would certainly help.

Purdue: The Boilermakers missed out on the league's regular-season title, but Purdue still hit some major milestones Saturday. The program reached 25 wins for the 15th time and is 101-11 in its last 112 home games. Purdue also regained some momentum as its seeks bigger goals in March and April.

Last week, Purdue tied the school record by appearing in the top 10 for the 17th consecutive week. Tuesday's loss at No. 10 Wisconsin threatened to keep the Boilermakers from breaking that mark this week. Saturday's victory may be enough to send them past the 1986-87 team that spent the entire season ranked among the nation's 10 best teams.

Purdue: Zach Edey had 10 points and 11 rebounds. ... Jaden Ivey had 10 points in what could be his final home game, too. Ivey is projected as a top-10 draft pick. ... The Boilermakers have won 10 of their last 11 in this series and five straight at home.

Indiana: Race Thompson had nine points and 10 rebounds. Jackson-Davis finished with six rebounds. ... The Hoosiers were just 5 of 20 on 3s. ... Indiana had a 30-24 scoring advantage in the paint.

The rivalry always brings out some special guests. Saturday was no surprise. Former Purdue coach Gene Keady drew the loudest cheers when he was shown on the video board. Former Vice President Mike Pence and Indiana Gov. Eric Holcomb received a mixture of cheers and boos when they were shown. Former Boilermakers player Ryan Cline received a rousing ovation as fans watched him chug a beer.

Indiana: Faces an undetermined opponent Thursday in the conference tourney at Indianapolis.

Purdue: Must wait for the league tourney bracket release to determine who they'll play Friday.