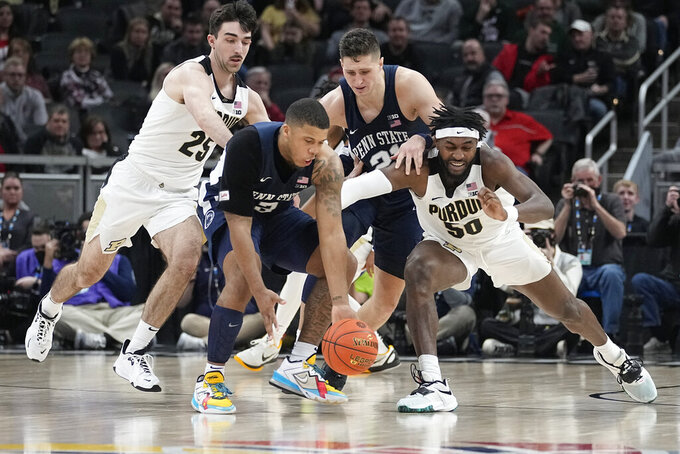 Penn State's Myles Dread (2) controls the ball in front of Purdue's Trevion Williams (50) during the second half of an NCAA college basketball game at the Big Ten Conference tournament, Friday, March 11, 2022, in Indianapolis. (AP Photo/Darron Cummings)

Newman scored 12 points off the bench, Jaden Ivey had 17 and Zach Edey 15 to lead No. 9 Purdue past Penn State 69-61 in the Big Ten Tournament quarterfinals Friday night.

“For him to be productive, you have to tip your hat to him,” Purdue coach Matt Painter said of Newman. “We don’t win the game without him."

Newman, who had been out of the rotation and hadn’t played since Feb. 10, helped spark a the sluggish Boilermakers (26-6) with seven points in the first half. Newman hit all four shots, including two 3-pointers.

“Brandon was ready for his moment,” said Penn State first-year coach Micah Shrewsberry, who was previously an assistant coach at Purdue.

“Our guys hung in there and kept making plays,” Painter said. “We grinded it out and proved we could do that and get a win on a neutral court.”

“We just had to figure out a way to win,” Ivey said. “We've been in situations. We had to stay poised, finish the game and win.”

The Boilermakers rebounded from a slow start to take a 35-31 lead at halftime. Trailing 24-15 with 7 minutes left, Purdue closed the half by outscoring Penn State 20-7.

“I had to settle into the game,” Ivey said. “It took me a while to get going. They’re a tough team to play."

“It was a hard-fought game,” Shrewsberry said. “It's an emotional game for me playing against those guys, who I spent many years with. I thought they played great. Our guys are warriors. I love our fight. The guys who are seniors put their blind trust in me and they didn't have to. They way they competed all year, I'm so proud of these guys."

As the No. 3 seed, Purdue is the only one of the top four seeds to advance. It’s the first time both of the top seeds have been knocked out before the semifinals. No. 5 seed Iowa will meet No. 9 seed Indiana in the other semifinal.

Penn State: The Nittany Lions gained some momentum for the future with a spirited performance against Purdue and two tournament wins.

Purdue: If Purdue and Indiana both advance, it would be the first all-Indiana championship game. The Boilermakers had trouble putting away Penn State, which has been an issue in recent games. “We have to play better (against Penn State),” Painter said.

If Purdue remains in the top 10 likely depends on how it fares against Michigan State in semifinals.

Penn State: Will prepare for improving in Shrewsberry’s second season.