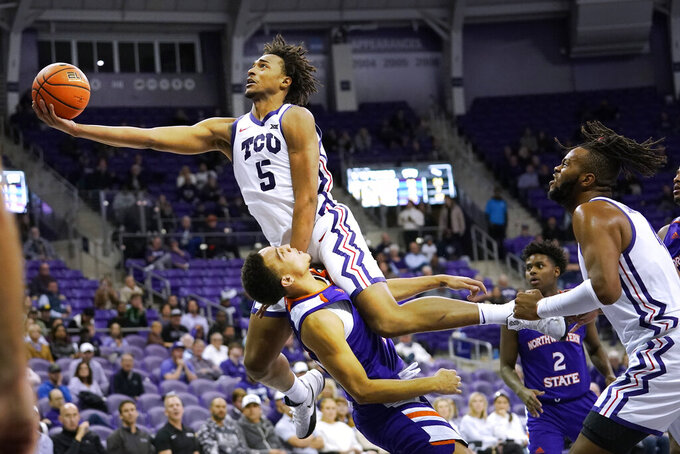 FORTH WORTH, Texas (AP) — Ja’Monta Black scored 25 points, Demarcus Sharp added 19 and Northwestern State rallied from 12 points down to beat No. 15 TCU 64-63 on Monday night.

“We have gotten down in games, and they continue to battle back,” Northwestern State coach Corey Gipson said. “Every game we play, it’s like they start to remember, ‘Hey, I can play a little bit.’ So we’re starting to see the light come on.”

Chuck O'Bannon Jr. had 12 points and Micah Peavy scored 10 for the Horned Frogs (2-1), who were without leading-scorer Mike Miles Jr. (left knee and ankle injury).

“Give credit to Northwestern State, they had a great game plan," TCU coach Jamie Dixon said. "Simply put, their guards outplayed ours. ... I’ve got to do a better job. We’ve got too reliant on 3-point shooting.”

Sharp's floating jumper with 1:12 left put the Demons ahead 64-63. TCU's struggles from earlier in the half returned as O'Bannon and Jakobe Coles put up shots that were off in the final minute. Haney secured possession and called a timeout with 35 seconds left.

Northwestern State ran time off the clock before heaving a long range shot as the shot clock expired. After a timeout, O'Bannon's desperation 3-pointer as time expired rimmed out.

Joshua Williams’ layup pulled the Demons to 34-33 early in the second half before the Horned Frogs used a 15-4 spurt to take a 12-point lead on Rondel Walker’s layup with 13:05 left.

The Demons clawed all the way back and tied it at 61 on JaMonta Black’s 3-pointer with 3:33 remaining and Jordan Wilmore’s free throw 43 seconds later put them ahead.

“The game ball goes to big Jordan Wilmore,” Gipson said. “He maybe didn’t score a lot of points, but he impacted the game in so many different ways. He was a defensive enforcer tonight.”

Eddie Lampkin Jr.'s rebound and putback then gave TCU a 63-62 lead with 2:25 to go, but the Frogs didn't score again.

It hasn’t been the smoothest of beginnings for TCU. The Frogs had to rally to beat Arkansas-Pine Bluff in their opener and struggled to put away Lamar on Friday.

“Not just this game, but these first three games, our identity of playing hard and working hard has not been shown,” forward Emanuel Miller said. “This is a challenge we have to overcome. We’re going to show the world what kind of team TCU is.”

TCU senior guard Damion Baugh, who started 30 of his 31 games last season, served the third game of a six-game suspension imposed by the NCAA for signing with an NBA-certified agent after last season. The suspension was revealed before Monday’s game, and Baugh will be eligible to return Nov. 30 against Providence.

TCU coach Jamie Dixon said Baugh self-reported the incident by telling the coaching staff, which then told the school’s compliance office. Dixon said it did not include any benefits, lasted for a matter of days, and was handled the right way internally.

TCU will likely drop out of the AP Top 25 next week after this loss.

TCU continued to struggle from 3-point range. The Horned Frogs missed their first 12 shots from beyond the arc. O’Bannon made TCU’s first 3 about 3 minutes into the second half. The Frogs finished 2 for 21 from distance and are a combined 14 for 74 over their first three games.

TCU hosts Louisiana-Monroe on Thursday night to cap its four-game homestand before playing California in the Emerald Coast Classic on Nov. 25 in Niceville, Fla.