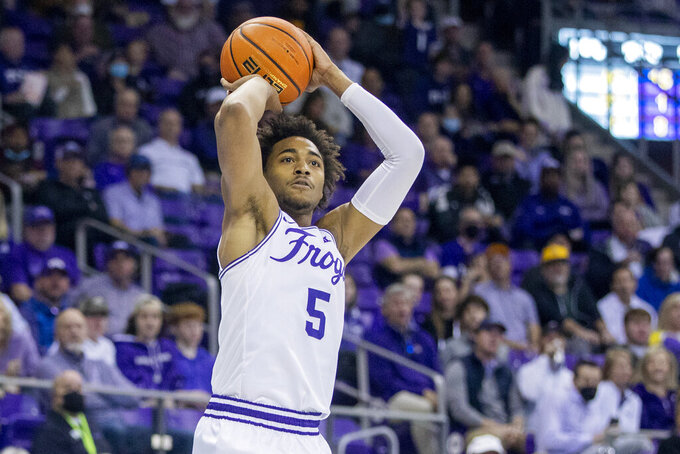 TCU forward Chuck O'Bannon Jr. (5) shoots a three pointer in the second half of an NCAA college basketball game against in Fort Worth, Texas, Saturday, Jan. 29, 2022. O’Bannon scored 16 of his career-high 19 points after halftime and TCU held on to beat slumping 19th-ranked LSU 77-68. (AP Photo/Gareth Patterson)

FORT WORTH, Texas (AP) — Chuck O'Bannon and TCU had a deep response to 19th-ranked LSU's pressure in a comeback performance.

O'Bannon scored 16 of his career-high 19 points after halftime, including three consecutive 3 pointers from basically the same spot, and the Horned Frogs held off the slumping Tigers 77-68 in the Big 12/SEC Challenge.

“They felt good. They were pressuring up top, so it opened it up for me in the backcourt," O'Bannon said. “So that was that.”

While maybe not quite that easy, that stretch made a huge difference.

“It was good because it was the end of press," TCU coach Jamie Dixon said. 'It just loosened us up, I think took off the pressure.”

Even though LSU (16-5) was able to cut that deficit to one with a 20-5 run over the next 6 1/2 minutes that Tari Eason began with six consecutive points, the Tigers were never able to take the lead. They lost for the fourth time in five games.

“(O'Bannon) there in the second half, getting behind the press really, really hurt us,” LSU coach Will Wade said. “I thought Miles controlled the game, I thought he played a tremendous game, brought them home down the stretch, driving it and getting to the free throw line. It was a tough, tough afternoon for us.”

Eason had 16 points to lead four players in double figures for LSU, while Darius Days had a double-double with 14 points and 12 rebounds. Eric Gaines added 14 points and Brandon Murray 10.

But O’Bannon stretched the lead back to nine, with three free throws after being fouled on another attempted 3-pointer to make it 65-56. That came right after his follow-up inside of a Miles miss.

“I thought TCU finished a lot harder shots than we missed. I thought we missed a lot of kind of point-blank layups,” Wade said. “You have to expend so much energy to get back. You know, it’s tough to sometimes get over that hump at the end.”

The Tigers' full-court pressure forced TCU into a 10-second turnover before they took a 24-23 lead with 5:14 left in the first half on a long field goal by Murray. The Frogs then had to use a timeout to avoid another turnover trying to get the ball across midcourt.

Murray's shot initially credited as a 3-pointer, but was changed to a two-pointer on a replay review during a media timeout a couple minutes later. By that point, at the 3:55 mark, TCU had gone ahead to stay after scoring seven points in a row.

Francisco Farabello made a 3-pointer from the left corner, then at the other end of the floor drew a charging foul against Shareef O’Neal. The Frogs were up 30-24 after reverse layup by Micah Peavy and a floater by Miles.

LSU: Wade said the Tigers were just a step behind throughout the game. “We gave up way too many middle drives, we got split too much,” he said. "We were just behind the action most of night because of their cutting and their ball movement. They did a nice job."

TCU: The Frogs already have two wins more than they had all of last season, and it was their second weekend in a row beating a ranked team. They won 59-44 at then-No. 15 Iowa State last Saturday, but then had the lopsided loss at home Tuesday to a Texas team that had just dropped out of the poll.

Baugh scored on an inbound play to tie the game at 17, on what was essentially a pass to himself. Baugh threw the ball in off the back of Eason, who never saw it. The TCU guard grabbed it and scored on a reverse layup.

LSU, even after a win over Texas A&M on Wednesday, could slip out of the Top 25 for the first time since the end of November when the new poll comes out Monday.

LSU: Return to SEC play with a home game against Ole Miss on Tuesday night.

TCU: On the road for the only time in a five-game stretch, Monday night at Oklahoma.